Star Wars Fun for Kids and Parents at Legoland California 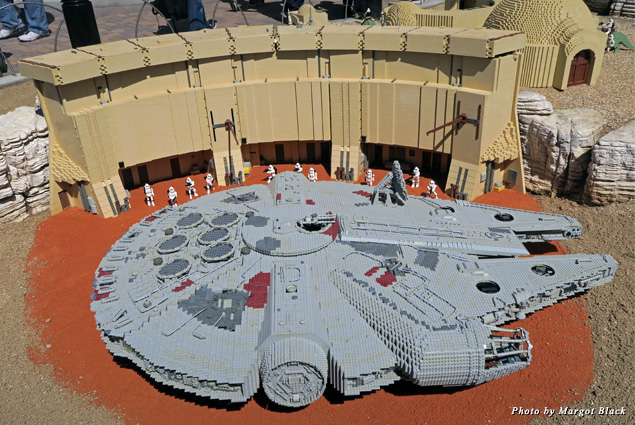 If you want to be your kid’s hero, take him or her to Legoland and let them play with toys, meet cool characters from a hit movie, go on a treasure hunt, splash around in a pool, and eat lots of great, easily accessible kid food. You won’t go wrong. Similarly, if you want your husband to love you, also take him to Legoland and let him drool over a Star Wars spaceship (and then request diamonds for your birthday).

I whisked my family away for a mini-vacation to Legoland in Carlsbad, California, which features a new, awe-inspiring “Star Wars” exhibit, and our one-night stay at the flagship Legoland Hotel was a huge success. In fact, I’m pretty sure I will be showered with love and kisses from both my husband and seven-year-old son for the rest of my life.

I’ll be honest, I knew very little about “Star Wars” (I realize this is a huge cultural failing so try not to judge me), but my husband loves the franchise, and with the advent of the new “Star Wars” movie out at the end of this year my kid is about to get to know a lot more about Luke Skywalker, Yoda, a bunch of droids, and that big hairy one. No, I don’t mean Han Solo, I’m talking about Chewbacca (see, I’m learning!), and so the timing of our visit was perfect.

We stayed at the unbelievably fun Legoland Hotel and toured the park over two days. Highlights included giant model displays of scenes from the six live-action “Star Wars” movies, including a whopping eight-foot-wide Lego Death Star, and also displays from the animated series, “Star Wars: The Clone Wars.” 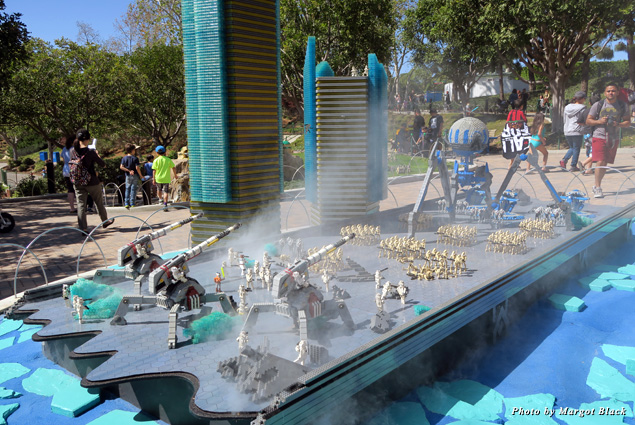 There are six Legolands in the world, but we drove to our nearest resort located about 30 minutes north of downtown San Diego. It truly is Lego heaven but appeals to family members of all ages (Fun Fact: Lego gets its name from the Danish phrase leg godt, which means “play well”).

The entire theme park comprises not just Legoland itself but also a water park, the Sea Life Aquarium, and the hotel. You can’t miss it—everything is larger than life and vividly colored. There are more than 60 rides and attractions, offering endless exploration, surprises, and interactive play. Everything, and I mean everything, is made from Legos. Just inside the entrance to the park, we were welcomed by a bright red, nine-foot-tall, 34-foot-long dinosaur called Bronte, who is made completely from Lego bricks.

We visited during a promoted Star Wars-themed weekend; the Lego Stars Wars Mini-land actually opened in 2011 and has proved to be a huge hit. We ran into all the famous characters, including three scary stormtroopers, an equally scary Lego Darth Vader, and a super-cute Lego Yoda. We entered the galactic family Lego building challenge and put our Jedi knowledge to the test during a Star Wars Trivia contest (my husband pretty much answered everything correctly). 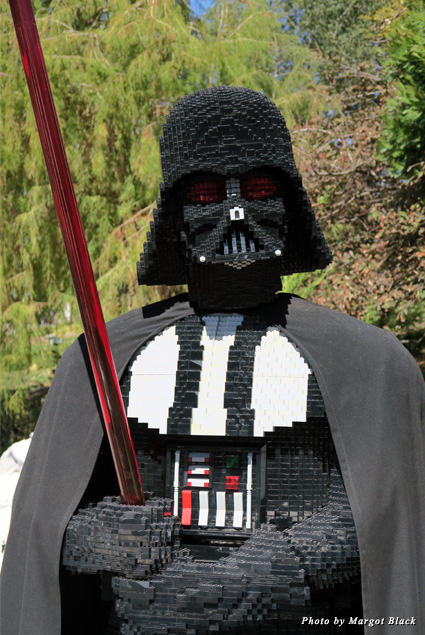 One of the biggest draws is the supremely impressive Lego Death Star, which spans eight feet by 13 feet wide and weighs more than 1,900 pounds. It truly is a magnificent feat of engineering, taking eight model builders more than 1,800 hours to build (the model builders have created all 30,000 Lego models in the park). Children can play with the laser turrets and push various buttons on the exhibit to activate different scenes from the film. We also loved the giant Millennium Falcon model and I wanted to hug R2D2, who again was made entirely out of Legos and whizzed around on his little wheels. Adorable.

The Legoland Hotel is located at the main entrance to the park, so it’s super convenient and a lot of fun. While park tickets are not generally included in the price of a room, if you stay at the hotel you can enjoy early access to select rides and attractions before the park officially opens, which cuts out a lot of waiting. All of the 250 guest rooms are fantastically themed; you can choose from one of three Lego lines: Pirate, Kingdom, or Adventure. We chose Pirate, which my kid loved as it featured brightly colored sea-faring murals on the walls. The rooms include two separate sleeping areas, with a king-size bed for grown-ups and a separate area for up to three children, complete with a bunk bed, a pullout trundle bed, and its own TV.

At check-in, Jett was invited to go on a treasure hunt where he unlocked a safe in our room that had—you guessed it—a Lego game inside. He was overjoyed, and it kept him busy while we unpacked and found our bearings. 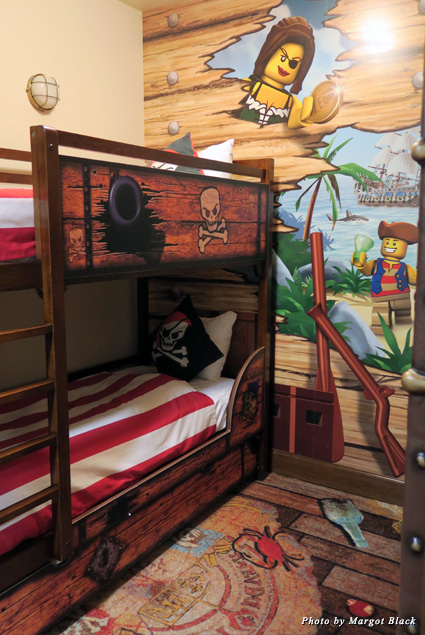 The hotel was full of surprises. Every time you entered the elevator it would light up and play loud dance music; my husband and I managed to embarrass our son with some crazy mom and dad dancing more than once. It was hilarious.

We also loved the pool—it was around 90 degrees during our visit—so we made sure we had time to splash around in the water and cool down. The pool area is equipped with life vests for non-swimmers as well as giant foam Lego blocks that can be used to build rafts and other fun stuff.

If you have time, you can also visit the park’s dedicated water park, which features giant slides, rafting, a small sandy beach area, fountains, and a wave pool, plus plenty of Lego toys (of course!). There’s also the charming Sea Life aquarium, which is home to “Nemo”-like clownfish, reef sharks, rays, and octopuses and features play zones, fun facts, and quiz trails. 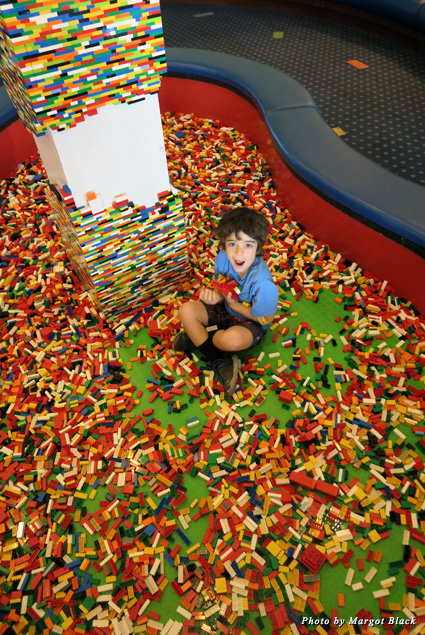 This isn’t a gourmet adventure by any stretch of the imagination, but it was perfect for a family holiday with ample delicious food choices and culinary kid heaven. There’s a family restaurant, a café, and a lounge at the hotel. My son had a ball trying the pizza, potato waffles, fries, and corn dogs at the kid-level buffet and loved it. There are plenty of healthy salad options, but no kid is going to choose lettuce, cucumbers, and tomatoes over a bowl of mac and cheese (and rightly so), so we allowed him to indulge—and frankly, we indulged a little too. 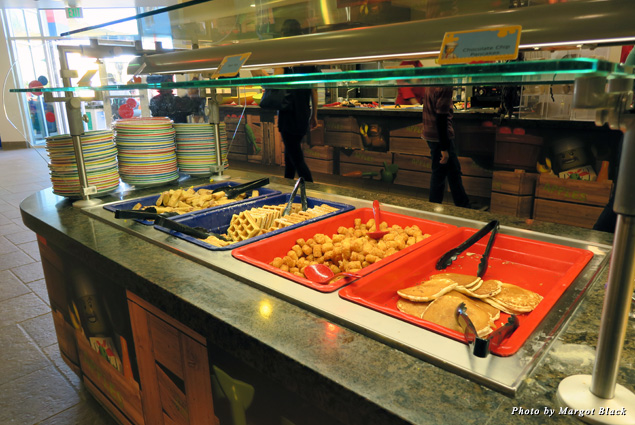 The park is very child-friendly and also very clean, which I appreciated, but there are plenty of perks for adults, too. (For example, my husband and I enjoyed delicious cocktails in the hotel bar.) A standout moment happened at the hotel when my son was called up onto the stage to show his Lego Competition creation with a pirate and an adventurer. He won third place for “most creative” and came off the stage an even more dedicated Lego fan.

When we arrived home, my son, who was still on a theme park high, spelled out “MOM” in Legos. It was super precious; he hugged me and told me how much fun he’d had. You can’t ask for more and I’m now a Star Wars fan for life. It was fantastic entertainment that clearly appeals to all generations, truly the best of the best—and by the time we left the park, the Force was definitely with all three of us. 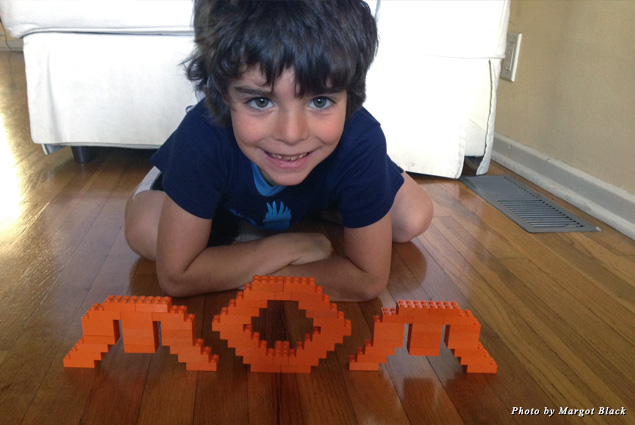