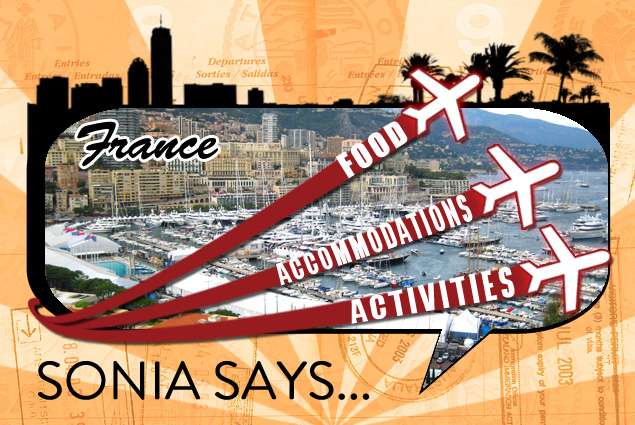 When you hear about the French Riviera, images of sun-kissed bodies, yachts, champagne, and luxury immediately pop into your mind—and for good reason. St. Tropez is famous for its beach parties, Monaco is home to perhaps the most famous casino in the world, and Cannes is synonymous with film festivals and celebrities. But what about Nice? Well, I think it’s the nicest.

Monaco, Nice, St. Tropez, and Cannes are the major cities that make up the Côte d’Azur. The French Riviera is located on the Mediterranean coastline of southeastern France, and it is filled with sun, surf, and plenty of yachts. 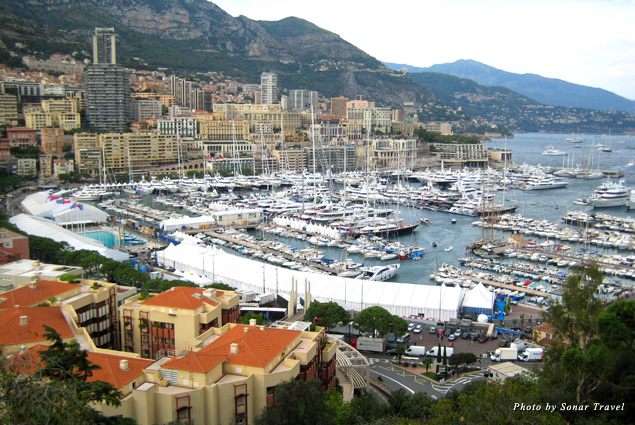 But who needs all that? If you are not in the mood to party or forgot your Ferrari at home and feel left out, then head to Nice. 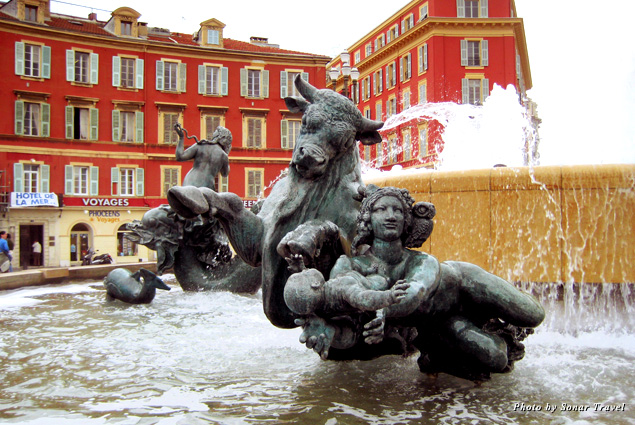 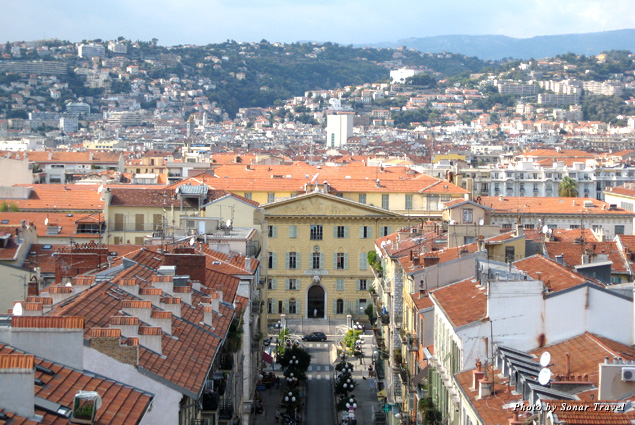 Although it is surrounded by wealth and extravagance, Nice has managed to maintain a cool, calm vibe. And even though it is the fifth most populated city in France, you wouldn’t know it. At the heart of this low-key city is Old Town Nice. Occupying just a few blocks in either direction, it is jam-packed with historical reminders of this old port city. Narrow winding streets, hidden alleyways, red-tiled roofs, markets, and plazas fill Old Nice with charm. You could easily spend a week getting lost in all of its nooks and crannies, eating socca and gelato, and perusing the local shops.

What is socca, you ask? Socca is a specialty food in southeastern France, especially in Nice, and it is delicious. You will find it on every street corner and you won’t be able to resist trying it. Socca resembles a flat pancake or crêpe and is made of chickpea flour and olive oil. It is baked on a wide, flat cast-iron pan and scraped up with something that resembles a spackling knife. You eat it with your fingers and a lot of black pepper. 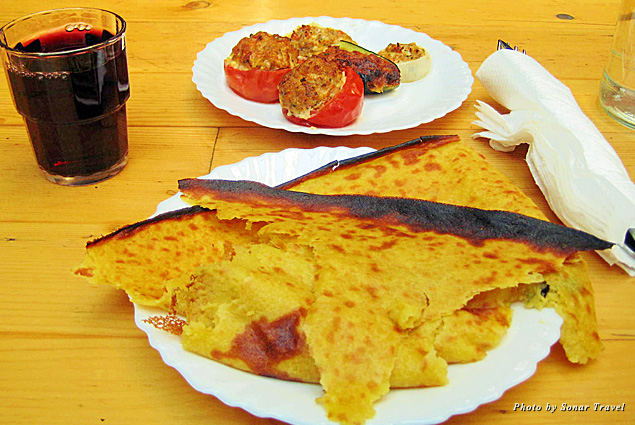 You will also find a lot of rosé wine in Nice, which happens to produce the best rosé wine in the world. And to be clear, I am not talking about the sugary sweet, liter-sized white Zin. I am talking about some of the finest red wine in France. That’s right. Rosé wine is made just like red wine, but the skins, which give red wine its color, are removed earlier on in the process. Hence the lighter color and taste. Just as with red wine, rosé wine can be made from any red grape varietal, including Pinot Noir, Cabernet Franc, and Syrah, to name a few. Young and old, men and women, can all be seen sitting at a café, enjoying a crisp, cool glass of the pink stuff.

Another local favorite is the salade Niçoise, which is named after one of its key ingredients: Niçoise olives. Can you guess where Niçoise olives come from? That’s right … Nice. You will also find stuffed tomatoes, ratatouille, and rabbit dishes on just about every menu in Nice. And, of course, there seems to be a gelateria on every block. You won’t go hungry in Nice. 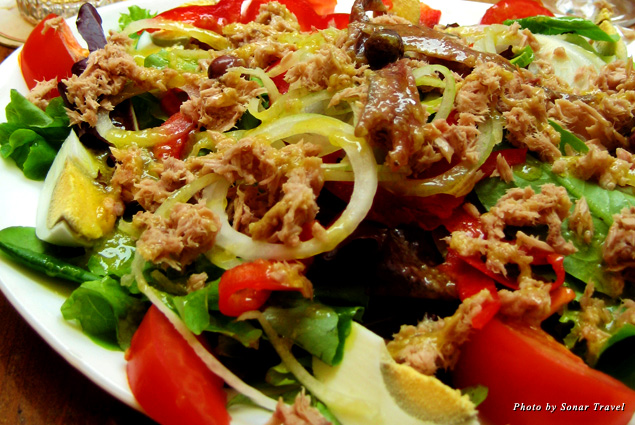 In addition to finding amazing food and wine in Nice, you will also discover some of the most beautiful and romantic views. There are several spots throughout the city that offer sprawling views of the coastline, mountains, and city.

The Museum of Modern and Contemporary Art, for example, does indeed house impressive works of art by Warhol, Lichtenstein, and de Saint Phalle, to name a few. But it’s what you find on the rooftop that makes this museum extra special. Even if you do not enjoy modern art, museum admission is free so you have nothing to lose. Head straight to the top of the museum for marvelous views of red-tiled roofs, bright blue oceans, and green mountains in every direction. 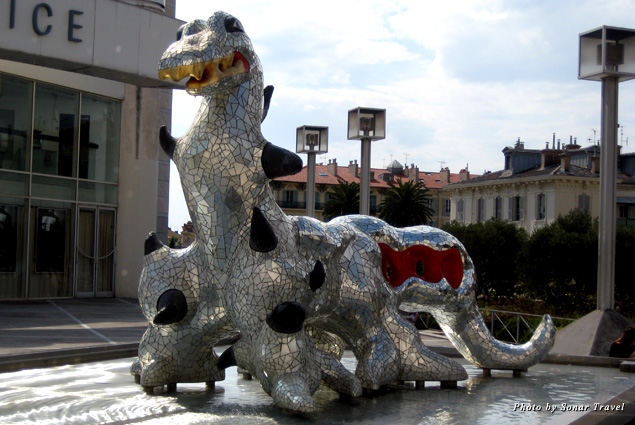 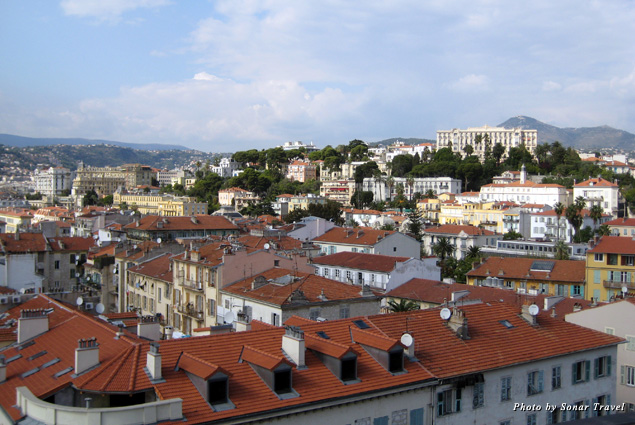 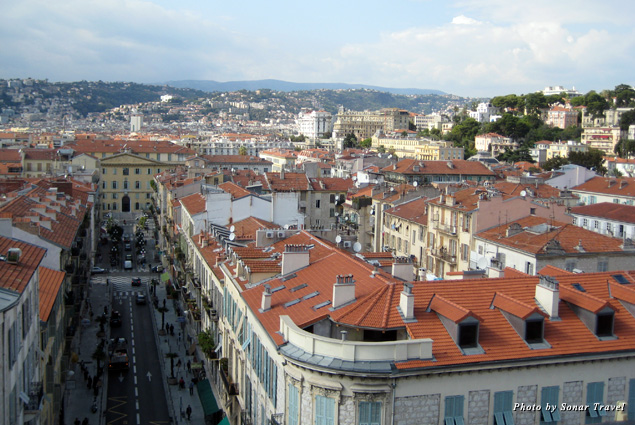 For spectacular views with a side of romance, you need to venture outside of Nice proper to the village of Eze. Though not technically Nice, you can easily hop on a bus and be there in no time. Eze is located about 10 kilometers east of Nice, about halfway between Nice and Monaco. It is a little bit tricky to locate the right bus and make sure you get off at the right stop, but I promise, it will all be worth it. 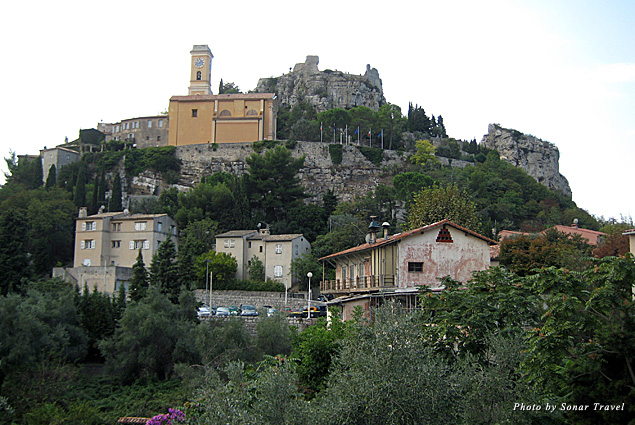 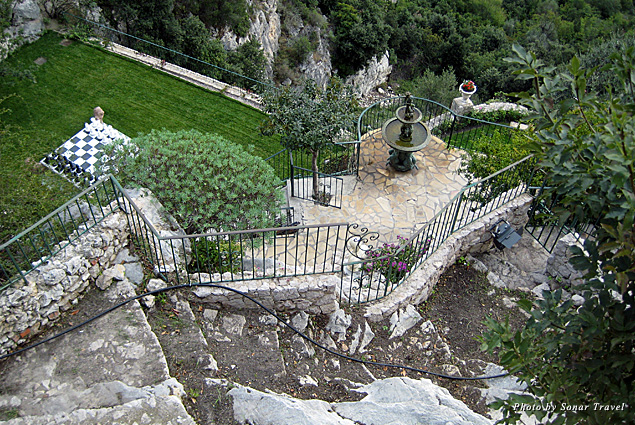 The medieval village looks like something out of a fairy tale. Cobblestone streets and buildings, mysterious doorways, and brightly colored flowers climb the walls. You will be enchanted as you wonder through the village, but your jaw will drop when you get to the very top and enter Le Jardin d’Eze. There is a small fee to enter, but it is worth every penny. I believe this is one of the most romantic and picturesque spots I have ever been. It’s almost too much for your eyes and mind to take in. 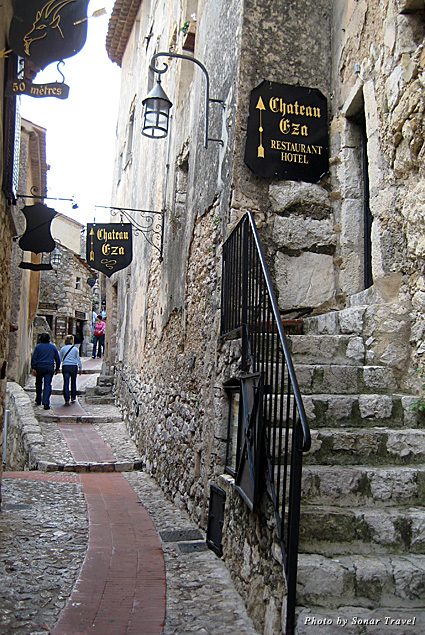 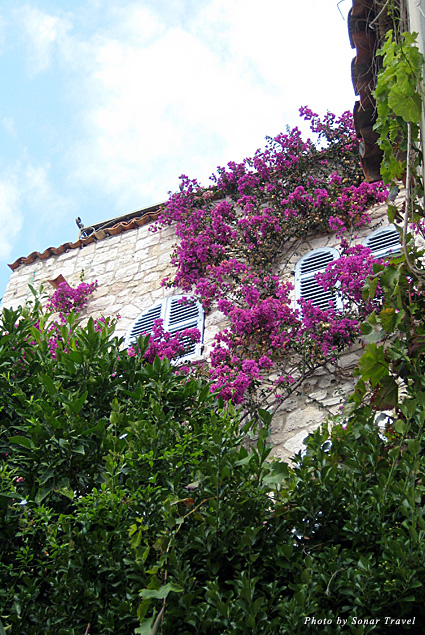 Le Jardin d’Eze is known for its collection of cacti and succulents and for being a favorite hangout spot of Walt Disney. But more importantly, it is perched high up on a hill providing magnificent, breathtaking views up and down the coast, of the city below, and of the sprawling mountains. It is truly a very special place. 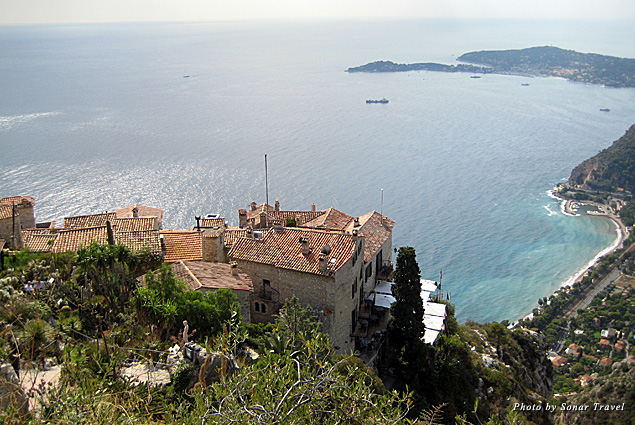 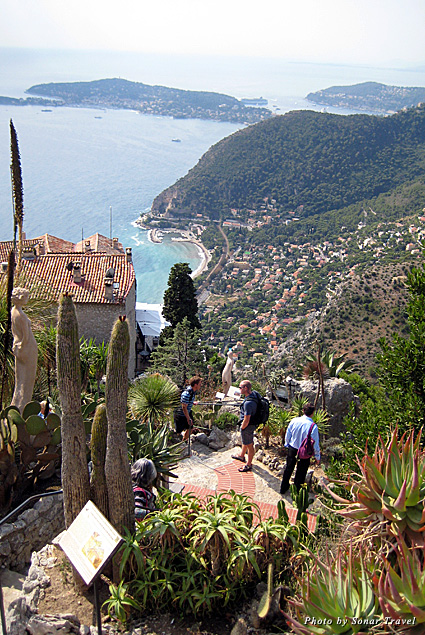 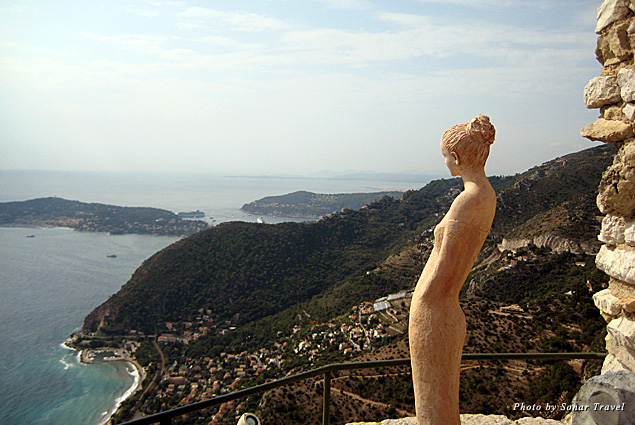 If that wasn’t enough, the historic Fragonard perfume factory and shop are located just at the foot of the hill. Anyone who gets a bottle of this famous perfume as a souvenir from you is lucky indeed.

Back in Nice, there are plenty more attractions to dazzle you. Stroll along the Promenade des Anglais, or La Prom, for some excellent people watching, restaurants, and beach clubs. (But don’t watch the topless bathing beauties; that’s just plain rude.) You may be surprised to see the beaches in Nice are rocky, not sandy. But that certainly shouldn’t stop you from enjoying the beach and it definitely doesn’t deter the locals. Simply rent a lounge instead of using a towel, and you’ll be all set.

If you tire of gazing at picturesque oceans, there are several museums that might entice you. In addition to the Museum of Modern and Contemporary Art there is also the Chagall Museum and the Matisse Museum. If you love either of these artists, you will be in heaven. Although Marc Chagall was a Russian-born painter, many of his works were inspired by Nice and are housed in his modern museum. From paintings to stained glass and sculptures, this small museum is bursting with inspiration. 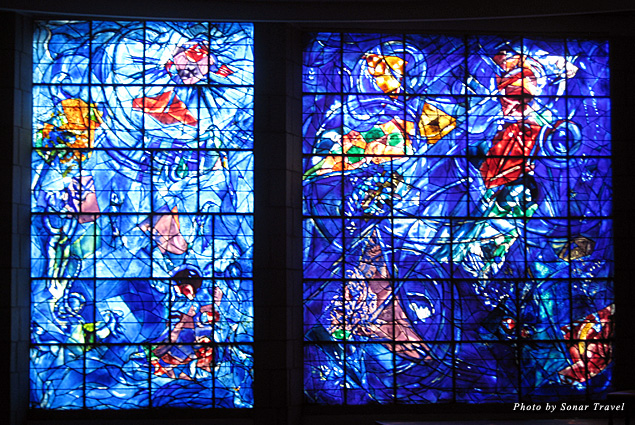 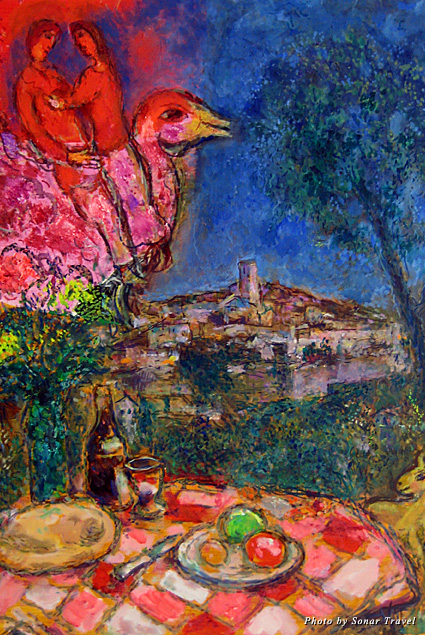 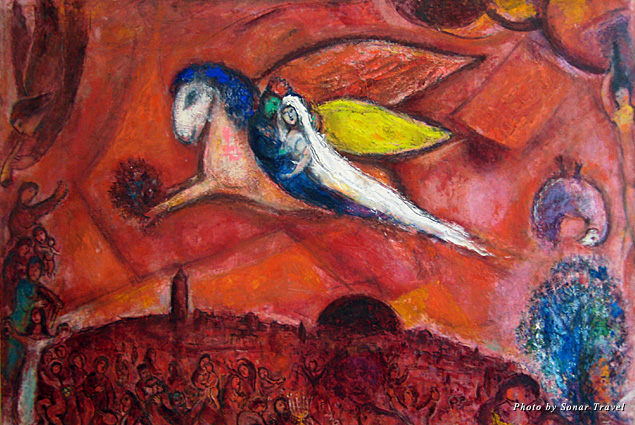 There is also another famous piece of Russian architecture located in Nice. You will be surprised to learn Nice is home to the largest Russian Orthodox cathedral in Western Europe. St Nicholas Orthodox Cathedral is located in an unassuming neighborhood, and the brightly colored domes, synonymous with Russian church architecture, seem out of place. The cathedral was built in memory of Nicholas Alexandrovich Romanov, son of Alexander II of Russia, who died in Nice. It was also meant to serve the large Russian community who settled in Nice during the early 1900s. 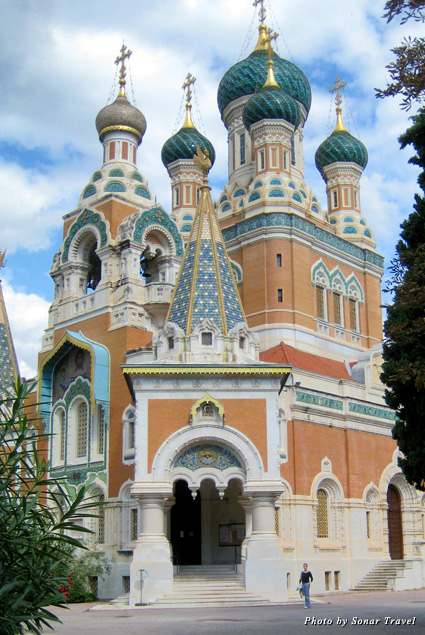 From beaches and art to perfume and cathedrals, Nice hides a little bit of magic around every corner. Next time you are headed to the Côte d’Azur, put down the champagne, grab some rosé, and head to Nice! 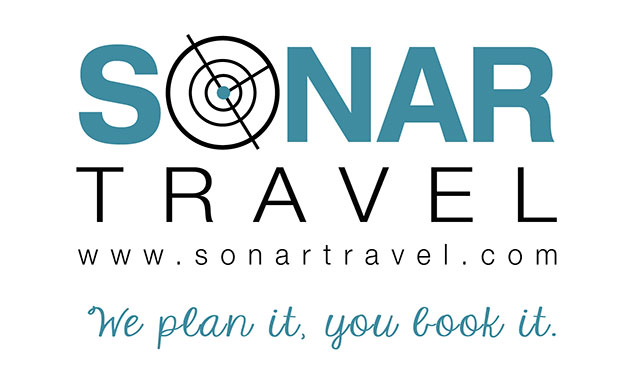