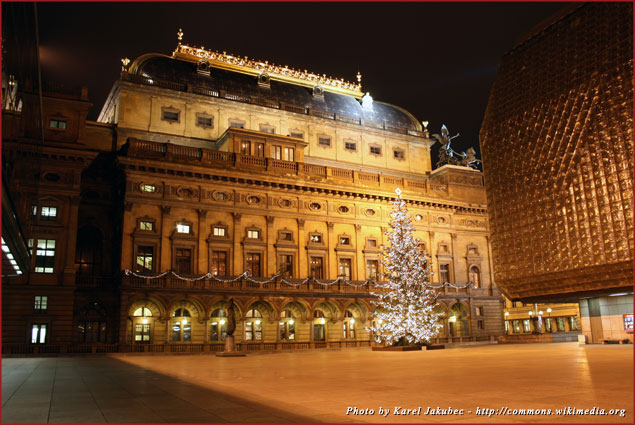 Of the many unsolicited recommendations given to my wife and I about activities for our stay in Prague only one tended to come up as often as “hella beer, dude!” Actually, that’s not entirely accurate. It was I who, upon learning of our trip to the Czech Republic, was excitedly running around our flat, hopping up and down clapping my hands, and calling my wife “dude.” I digress…

We had heard that live performances were a must for any stay in Prague, whether it is ballet, a dramatic play, a “tourist concert” in one of the many churches or cathedrals, or the Opera. Prague boasts at least three major opera houses. There is the Národní Divadlo (National Theatre), the Státní Opera Praha (State Opera), and perhaps the most historically enchanting is the Stavovské Divadlo (Estates Theatre), where Mozart’s Don Giovanni premiered. We were told that a night at the opera costs a fraction of what it may in New York, London or other metropolis.

Although I am an amateur musician with a history of playing multiple instruments in school and performances, it is difficult to subjugate myself to three hours of opera. I would not call myself ignorant or closed to “culture”; I’m just realistic. That being said, my wife can be very persuasive. She is able to say something to the effect of, “I would like to see an opera while we are in Prague. We don’t have to go. I would like to, though.” What a bloody trap. She is leaving me an out but my sixth-wedded-kept-man sense catches me. I know I am neither the first person nor the last that will have to deal with such persuasion. This is not the first time I have been confronted with such a statement.

Wifey executed some preliminary research only to find that prices were nowhere near what we had heard. We had been told that seats could be had for as little as 50 Czech crowns (Kc). She checked all three major opera houses via their websites and came up with eventual frustration. Seems the prices were anywhere from ten to 20 times more expensive than we were expecting. Oh darn, I though. “Jazz bar instead?” I asked, half expecting a back-hand across the jaw.

I know disappointment on my wife’s face when I see it. When would she get the chance to milk this penny-pincher into opera tickets ever again? With reluctance I began scouring the interwebs with vigor. I searched each of the opera house pages my wife had visited. I then followed their links to the ticket websites and searched the various seating options for the different upcoming performances. There wasn’t much to be had. Were we misinformed? Early February isn’t exactly high season in Prague…

Returning to the opera house web pages again, I sensed something was fishy. All three of the opera house sites were directing visitors to the same ticket vendor even though only two of the opera houses are related. I also noticed that their pages were similar in style to a webpage my ten year-old cousin could create to dedicate her life to High School Musical.

I searched for “National Theatre” instead of “Prague Opera” and found the answer. Národní Divadlo has an official website, unassociated with the site we had been visiting. Additionally, their ticket vendor was selling balcony tickets ranging from 50Kc to 300Kc, not 1,000 or even 2,500Kc. Jackpot! We quickly became the proud reserve-ers of two tickets for seats in the front row of the first balcony for 300Kc (about 12€) each. Super-kept-man to the rescue!

More to come on our night out…

The official websites and information for opera in Prague: