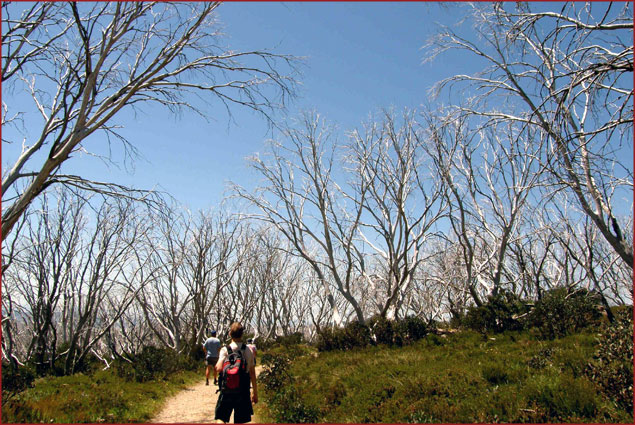 It’s been a hot summer in Albury. Usually temperatures hit 40 degrees C (104 F) for one stretch of the summer. This season, however, the mercury’s hit 40 or higher four times already, which means we’ve needed to find resourceful ways to keep cool. One obvious method is to travel somewhere where it’s not so hot.

With that in mind, we set out early one Monday morning, hoping to beat the 44 degree heat by going up into the Australian Alps at Falls Creek, VIC. I’d been there once before, but it was for a different reason in a different season – ski season. I was curious to see the ski slopes in summer. We wound up the road, past Mount Beauty, hugging each curve of the tight road. We were glad to see we’d had the right idea when we reached the top of the mountain and noticed a temperature difference of at least 15 degrees.

The ski slopes at Falls Creek are open in summer for a variety of activities – mountain biking, bushwalking, weekend chair lift rides, and canoeing/kayaking. We had decided on a bushwalk and stopped in the information centre (the best resource in any Australian town) to find out which was the best moderate hike. Thus, we set out on the 6km Wallace Hut to Cope Hut trail.

Hardy orange, pink and white wildflowers lined the trail, which is a cross country ski path in winter. Perhaps most striking, though, were the bald white gums – bleached branches against the Aussie blue sky. A bushfire ravaged the area in 2003, and the bare branches, blanketed in low vegetation, are its remnant. The forest of them – slope after slope – is almost skeletal and truly striking. 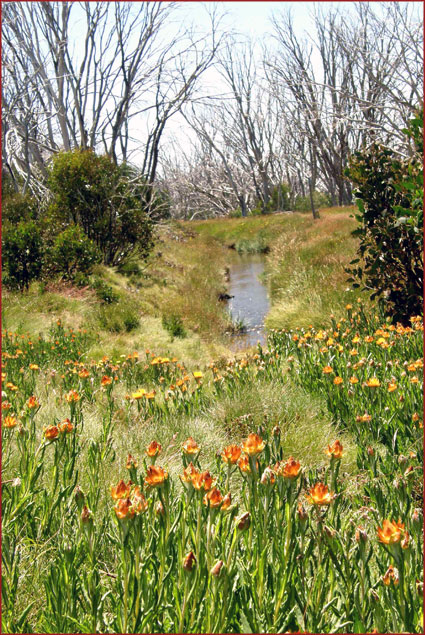 The trail soon led past Wallace Hut. Dating to 1889, the cattleman’s hut is the oldest remaining building on the high plains. It’s iconic and often featured in calendars and photographs. Sheltered beneath the snow gums, it made me feel like I’d wandered into an Australian folk story or Banjo Patterson poem.

The fairytale ended several minutes later, when we accidentally took a wrong turn (left instead of right), and hiked more than an hour in the wrong direction. Still, the vistas and cooler temperatures made it worth our time and the trek. Valley after gum-filled valley opened to the right, while to the left an aqueduct with small trout paralleled the path. The trail eventually led over the Rocky Valley dam wall, offering a wide view through the high plains. There is something about the mountains in summer that breathes escape.

After we realized our mistake, and turned around, our circular path led us back past Wallace Hut. As we approached, though, we heard music. Not just music, but the music of the highlands – bagpipes. It was like something out of my imagination – long, brassy strains echoing through the mountains. Except it wasn’t my imagination. When we reached the hut, there was the lone bagpiper, and we became his small audience. When he had finished (and we’d applauded his effort) I asked him “why?” The answer was just as intriguing as the music itself: the man’s last name was Wallace, he was an ancestor of the original Wallace “clan,” and came to the hut once a year to play in front of his family’s historic hut.

Sometimes making the wrong turn is worth it for the story at the end. 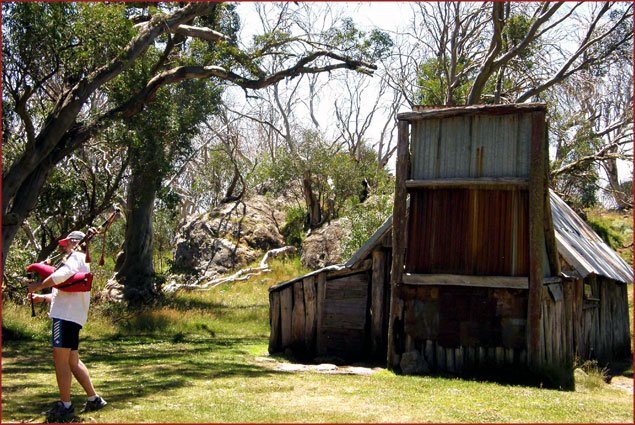 To beat the heat, and take a summer trip to Falls Creek, VIC, head about two hours south of Albury, up the mountain past the town of Mount Beauty. The Falls Creek ski resort also sponsors a summer schedule of activities, including a billy cart derby, dragon boat championships, and the Taste of Falls Creek Festival. For any summer activity, be sure to bring plenty of water, and follow “safe sun” practices to safeguard against the extreme UV at high elevations. More information on Falls Creek, VIC can be found online.