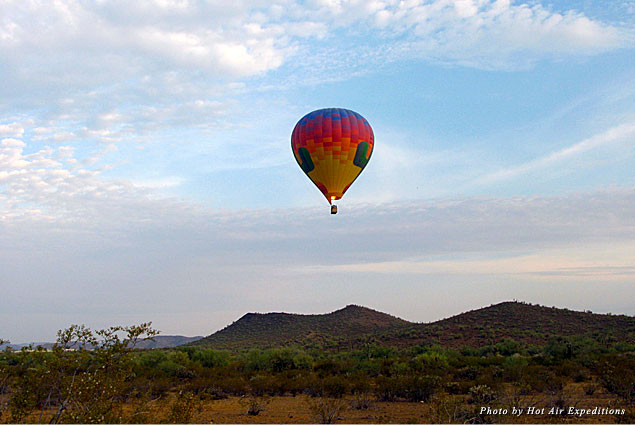 There is only one reason I would ever wake up at 4:45 a.m. on a Saturday: a hot air balloon ride over the desert. Hot Air Expeditions sent a van to the Four Seasons to pick us up, and our driver, Jim, drove us into the Sonoran Desert. As we drove, Jim served as the perfect tour guide, giving us various facts about the area and pointing out things of interest as we passed. Upon joining the other passengers and the crew, we waited while the balloon was inflated and then took off as the sun was rising. 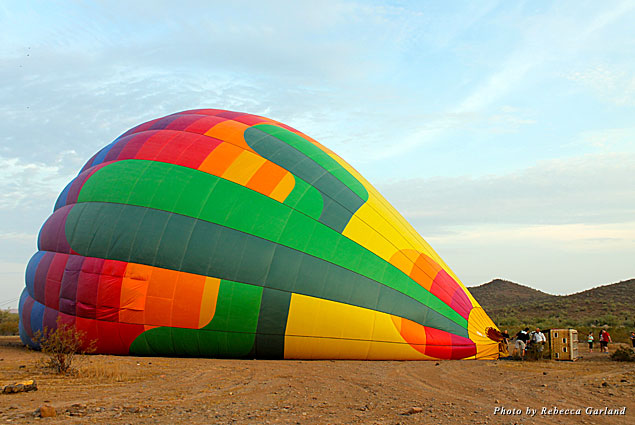 We were in competent hands as our pilot, Patrick, has more hot air balloon piloting hours than any other hot air balloon pilot in the country. As we passed over the desert, we spotted various types of wild animals before eventually climbing to more than 5,000 feet. Upon landing, we were met with glasses of champagne and a breakfast of quiche, croissants, and fruit catered by Vincent’s on Camelback. 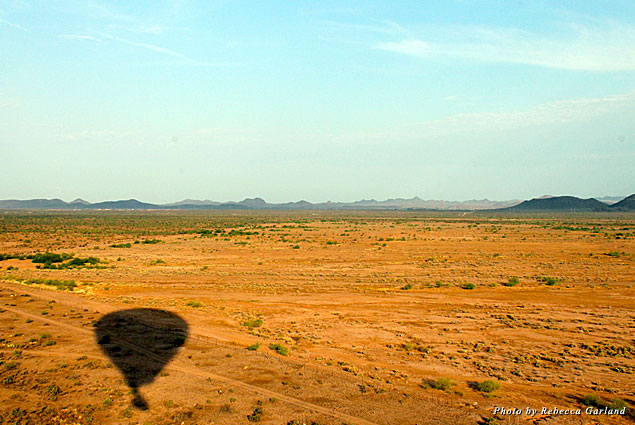 We arrived back at the hotel at 8 a.m. and promptly headed to the pool to grab a cabana and, most importantly considering our early start time, a nap. The weather turned overcast, which meant we were comfortable even when out from under the cabana’s misters. Pool hostesses walked by throughout the day with various complimentary treats, including slices of pineapple, corn nuts, frozen grapes, and old-school freezer pops. For eight hours, we did nothing but sleep, swim, read, eat, repeat. It was the ultimate in relaxation. 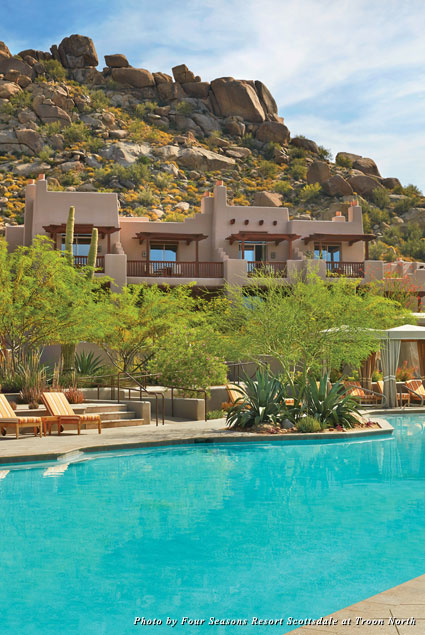 Later that afternoon, I visited the Four Seasons Scottsdale Spa for one of its signature treatments, a Sedona Earth Clay Mud Mask. After changing into a robe and slippers, I relaxed in the women’s spa lounge, sipping strawberry-infused water and eating blueberry shortbread cookies. Once I entered the treatment room, the massage therapist lightly exfoliated my skin and then applied a detoxifying body mask using Sedona clay. While the clay was drying, I enjoyed a scalp massage. A Vichy shower washed the clay off, and the treatment ended with a full-body application of lotion. As I left, the massage therapist provided me with water and chocolate-covered strawberries. I returned to my room a relaxed, soft-skinned, limp noodle. 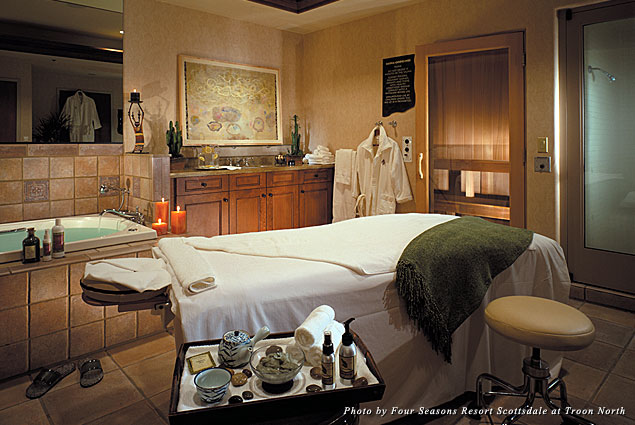 We had late reservations that evening, so we headed back to Proof for a pre-dinner cocktail. (Who am I kidding? I couldn’t get the pretzel knots out of my mind and needed an excuse to go back for more.) The bar menus were constructed of different state’s license plates, and I found my home state of Tennessee sitting one barstool over. After studying the menu, we drank a Proof Manhattan and a Spiced Lavender Mule, perfectly paired with pretzel knots. (I challenge you to find something not perfectly paired with those pretzel knots.) 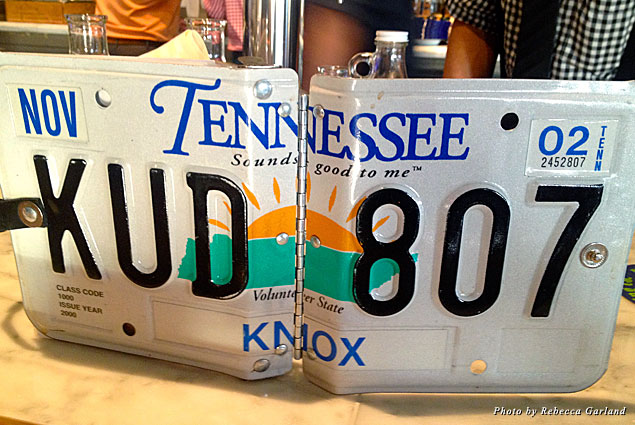 We drove to Old Town Scottsdale for dinner at the upscale gastropub, Citizen Public House. Relaxing in the low-lit, dark mahogany dining room, we ordered spins on classic cocktails: a Midwest Manhattan, which included tobacco and leather-infused bitters, and a Moe’scow Mule. 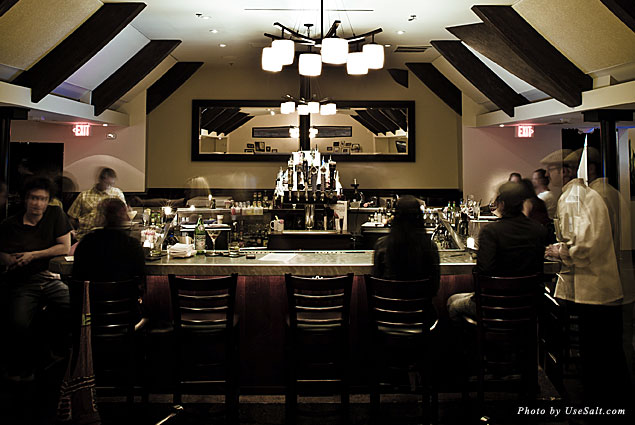 As we studied the menu, our server, Gary, steered us toward the chopped salad, admittedly not something I would normally order for dinner. After discovering Citizen Public House’s chopped salad has its own Facebook page (seriously—more than 850 likes), I was intrigued. Gary’s recommendation did not disappoint. The salad was delicious, built with corn, couscous, smoked salmon, Asiago, pepitas, tomatoes, arugula, and currants and topped with a buttermilk pesto dressing. 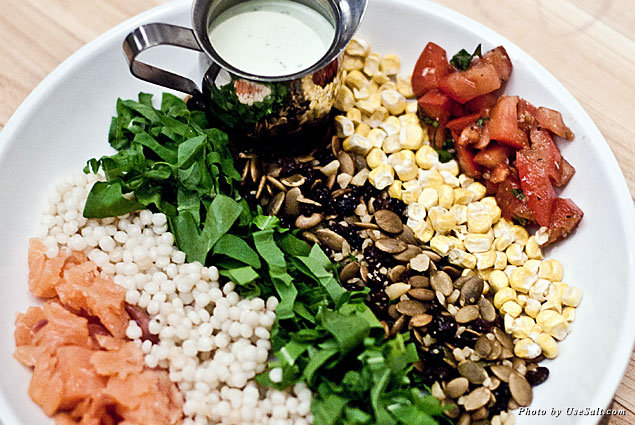 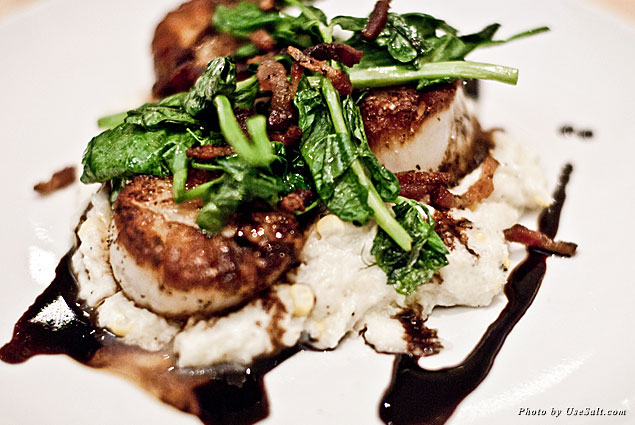 Post pigging out, we headed upstairs for a drink at Citizen R+D. Access the bar by an alleyway staircase at the back of the building. Once you call the number displayed on the door, cross your fingers the exclusive, 30-seat space has availability. While waiting, check out the posted “Protocol for Proper Cocktailing,” which includes such gems as “the Wild West is over” (no firearms allowed) and “women may approach men in the lounge; men may not approach women.” The hoop jumping is worth it. The speakeasy-style bar feels as if you’ve walked into a cozy living room—a cozy living room offering the most interesting drink menu we’ve ever encountered, that is. And at the risk of sounding like lushes, we’ve encountered quite a few.

We parked ourselves in front of the fireplace and studied the room. I was fascinated by the jars of spices and ingredients Tara, our mixologist, put to good use in concocting our two perfect cocktails. We drank the “Questlove Slushy”—think root beer float with booze and a delicious vanilla cream foam—and a take on a Manhattan, the “New Yorker” with vanilla bean and macadamia nut-infused Makers Mark. Bar snacks consisted of, among others, more of the bacon-fat popcorn from downstairs and a cheeky-sounding fondue called the “Kilt Lifter.”

Sunday morning began with breakfast at Proof. Pretzel knots naturally aren’t on the breakfast menu (believe me, I looked), so I settled for biscuits and gravy. Because I’m from the South and, frankly, snobby when it comes to Southern food in decidedly non-Southern locales, I generally find breakfast served west of the Mississippi is a disappointment. Proof’s biscuits and gravy were the exception. A fluffy “cathead” biscuit was split in two and covered in thick sausage gravy, served alongside scrambled eggs, bacon, and hash browns with tomato bacon jam. After breakfast, we made a beeline to the pool to soak up our last few hours of Scottsdale heat.

By mid-afternoon, breakfast was wearing off, so we reluctantly tore ourselves away from our pool cabana, checked out of the Four Seasons and headed into Old Town Scottsdale for lunch at Barrio Queen. Chef Silvana Salcido Esparza stays true to her roots, serving traditional Mexican dishes (you won’t find Americanized fajitas and chimichangas here). Barrio Queen also serves more than 250 varieties of tequila, so lunch naturally began with margaritas to accompany our guacamole and chips. While waiting for our entrées, we checked out the restaurant’s décor, an eclectic mix of Day of the Dead and the Virgin Mary.

In 2012, Esquire Magazine deemed Barrio Queen one of the nation’s best new restaurants, specifically lauding the cochinita pibil (pork marinated in sour orange and achiote paste, wrapped in a banana leaf, and slow cooked overnight, served with chipotle mashed potatoes and calabacitas), so naturally we had to sample. The pork was tender and perfectly seasoned, and the Mexican take on mashed potatoes gave the dish a comfort food feel. We also tried three of the 20 different varieties of tacos: slow-cooked brisket, spice-rubbed chicken with caramelized onions, and salmon and mango.

With a couple of hours to kill before leaving for the airport, we turned our attention to Scottsdale shopping. Realizing we were less than a mile from the largest mall in the Southwest (and admittedly a little warm from the afternoon heat), we decided to go indoors for air-conditioned entertainment at Fashion Square Mall. Nordstrom. Neiman Marcus. Barneys. Louis Vuitton. Jimmy Choo. Tiffany. Prada. The variety and quality of stores made me wish we had checked out the mall earlier during the trip. And not just the mall; there was so much we had missed, including Greasewood Flat, Frank Lloyd Wright’s home, Old Town Farmers Market, Desert Botanical Garden, Arizona Cowboy College. Summer or not, it’s time to plan another trip.

Read Part 1 of my Scottsdale visit.