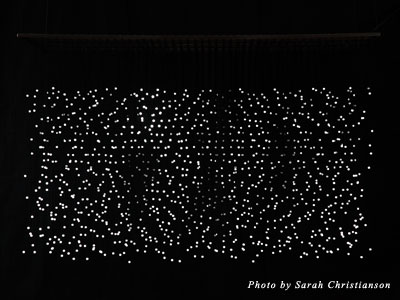 Three sophisticated and engaging shows are opening simultaneously at the San Francisco Museum of Modern Art and lending their depth and light to the upcoming fall/winter season.

Jim Campbell’s Exploded Views, a new site-specific installation placed overhead in Haas Atrium, is best viewed from the stair landings, watched as a movie screen – and the fanciest screen at that.

The art piece consists of 2880 LED bulbs on wires, positioned at different levels and shining like Christmas lights or midnight stars in the rural sky. A light sculpture as well as a screen, the work reflects constant movement from a projected film strip. What looks up-close like a succession of shifting shadows, from a distance turns into a cohesive action involving human figures.

Currently showing are scenes from Alonzo King LINES Ballet performance, but throughout the duration of the show several films will be projected onto the three-dimensional screen to be seen from every place, angle, and point of view in and around the atrium.

“When the two sides of the equation, the object and the viewer, move at the same time, a constant reconfiguration of the artistic experience takes place. This process of negotiating space in real time is the most essential quality of Jim Campbell’s work,” said Rudolf Frieling, curator of media arts with SFMOMA. 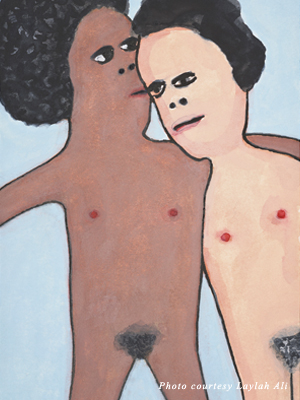 Equality, marital rights, and the legalization of same-sex marriage are at the heart of the intimate new exhibition The Air We Breathe, originated at SFMOMA by Apsara DiQuinzio, assistant curator of painting and sculpture.

The display is located on the second-floor gallery landing. Reflecting upon the national debate on gay marriage and offering their unique takes on the issue, contemporary artists from several countries present their smaller-scale artwork ranging from prints to elaborate multimedia pieces.

Learning to Share a Sink by Christian Holstad (2011) is as simple as it is recognizable by any couple in the world – a witty collage on paper with burn marks and staples – a great example of contemporary art made with mundane materials to express philosophical and psychological ideas.

Untitled by Laylah Ali (2011) a gouache and ink on paper depiction of a nude same-sex bi-racial couple, is neatly framed, and as cute as a preschooler’s color-pencil drawing of a friendly embrace, ever-so-slightly hinting at the multiple deep-running issues behind the visible bliss.

The most elaborate piece in the show, made on paper with extruded polystyrene, pins, string, photographs, and plastic by Elliott Hundley (2011) carries the name of the exhibition, The Air We Breathe, and is closely accompanied by a text of a song by the same name, written by Alphaeus Taylor: “The air we breathe is sharp as glass/ It stills the heart and stays the pass/ So why don’t we say our last goodbye/ And lay our love to die.”

The exhibition title comes from a line in the poem “Let America Be America Again” written by Langston Hughes in 1938: “Equality is in the air we breathe.” 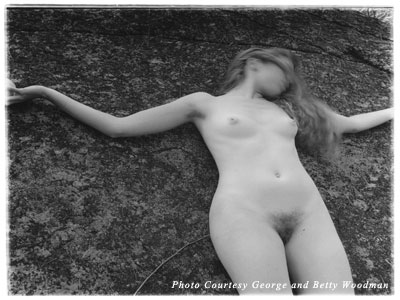 Francesca Woodman, a new exhibition of great intellectual power and emotional influence, is the glorious result of extensive research and profound analysis by Corey Keller, associate curator of photography. It reveals an enormous body of work created by the young artist Francesca Woodman, born in 1958, whose suicide at age 22 interrupted her already significant career and left a cult-like following in its wake.

About 160 black-and-white photographs were collected by the curator from Woodman’s immediate family. Many of them have never been shown in previous exhibitions and were made available only for this show.

Multiple self-portraits and staged images of a human body in abandoned architectural structures and open spaces develop like musical themes with variations. They relentlessly explore still poses and movements, light and shadows, implied meanings and symbolism with various props and costumes—all revealing a wealth of creative ideas of a singular female artist on the verge of maturity.

“The intersections of Woodman’s work with feminist theory, conceptual art, and photography’s relationship to both literature and performance are the hallmarks of the fertile moment in American photography during which she came of age—a time when schools were no longer producing commercial photographers but nurturing artists,” said Keller. “Photography was also blossoming in museums and the market as well, producing a wildly diverse set of photographic practices. This exhibition examines the expression of a highly subjective artistic vision. It also presents a timely opportunity to reconsider Woodman’s work within this critical juncture in American photographic history.”

Totally in Love With Totem, Cirque du Soleil How to Become a Shokoholic