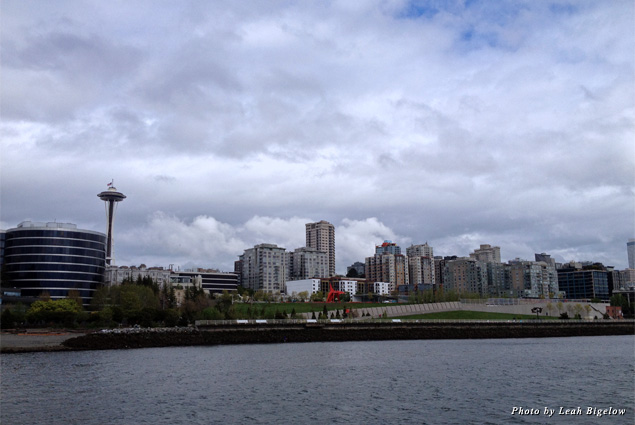 There was rain, as expected, when I arrived at the Seattle-Tacoma International Airport one Thursday evening. My fiancé and I dropped our bags off at our friends’ home, where we would be staying for the next few days, and we spent a relatively quiet night catching up with good friends and resting up for a full weekend of exploring Seattle, Washington.

When visiting a new city for the first time, I love to see a good mix of touristy spots and local favorites. For this trip, our absorption of Seattle’s icons would not have been possible without help from CityPASS. As with my trip to Chicago last year, I was once again thankful to have a booklet full of tickets to the city’s most must-see attractions, along with detailed information about how to get to and the best times to visit each spot.

Case in point: the Space Needle. CityPASS allows its booklet holders to ride to the top of the Space Needle not once but twice. Although we only had time to take one trip (which we made in the morning), I wish we could have taken advantage of the perk and had a second look at the city as the sun set and lights illuminated the 360-degree view of Seattle and beyond. 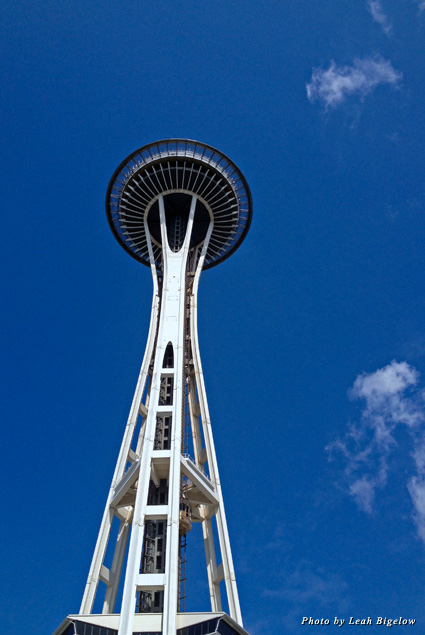 The Space Needle is located at Seattle Center, home to several theaters and attractions, including another CityPASS partner, the EMP Museum (formerly known as the Experience Music Project and Science Fiction Museum and Hall of Fame). Visiting the EMP Museum was one of the main highlights of my trip because of its impressive displays of contemporary popular culture.

Be sure to check out the exhibit “Hear My Train a Comin’: Hendrix Hits London” about Jimi Hendrix’s impact on the England city in the 1960s. “Nirvana: Taking Punk to the Masses” not only shares the story (and some cool memorabilia) of the early ’90s alternative rock band but also goes in-depth about the underground music scene Nirvana helped create. Movie lovers must make time for three awesome exhibits: “Fantasy: Worlds of Myth and Magic,” “Icons of Science Fiction,” and “Can’t Look Away: The Lure of Horror Film.” Each exhibit was well researched, well curated, and absolutely fascinating.

Also at Seattle Center is Chihuly Garden and Glass. While the full admission ticket is not included in the CityPASS booklet, there is a coupon for $5 off the ticket price so be sure to use it. The art experience showcases the incredible work of glass artist Dale Chihuly through eight interior galleries, a glasshouse, and a garden. Each colorful piece in the interior rooms was lit just so in order to highlight its unique characteristics, and I loved how the garden art was mixed with colorful flowers and plants. 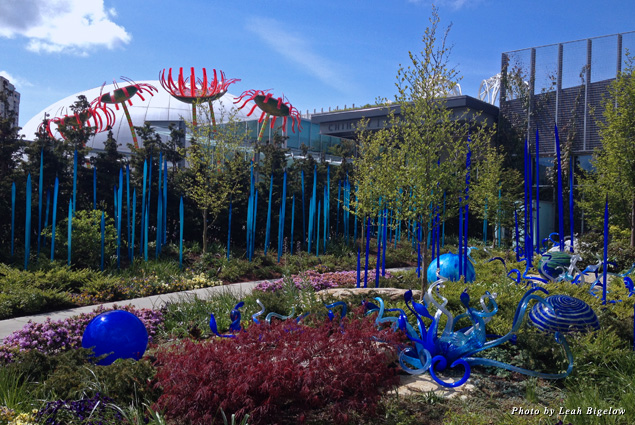 The Pacific Science Center, which highlights science, math, and technology, sits next to Chihuly Garden and, although we didn’t have the chance to visit on this trip, I did speak to a few people who said they had been before and really enjoyed it. One exhibit I was especially bummed to miss out on was “SPY: The Secret World of Espionage,” open through September 1, 2014. It sounds fascinating! The center has several rotating and permanent exhibits, as well as an IMAX theater, a planetarium, a live science stage, and a musical theater called the Laser Dome.

While so much can be seen and done at Seattle Center, visitors must still make time to visit Pike Place Market, probably the most iconic location in Seattle after the Space Needle. It’s about a 20-minute walk from the Space Needle to Pike Place and the waterfront, which is what we opted to do in order to get a better sense of our surroundings. Of course, you can also take a quick cab ride or go with public transit on the Seattle Monorail, which stops three blocks from the market. 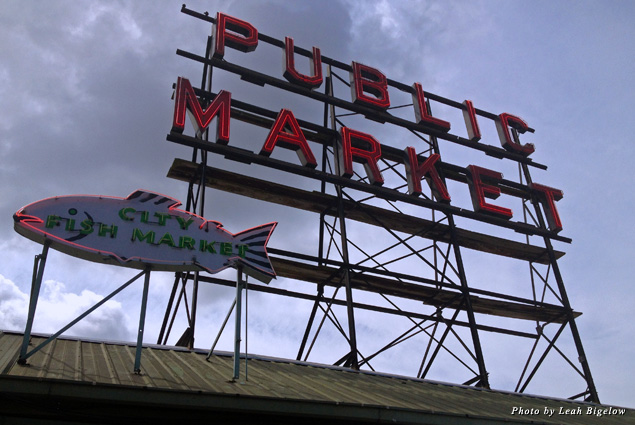 During our visit to Pike Place Market, the first order of business was lunch. We wanted something quick, delicious, and uniquely Seattle; we found it at Pike Place Chowder, located in Post Alley about half a block north of Pike Place and the market entrance. Waiting in the long line that snaked out the door was worth it for a lunch of hot New England clam chowder in a sourdough bread bowl and an Oregon Bay shrimp roll, which we enjoyed al fresco on a sunny day.

Once we had refueled we made our way to the market, particularly Pike Place Fish Market, at the corner of Pike Street and Pike Place. The iconic seafood stall is the site of the world famous fish toss by a crew of fish mongers dressed in orange overalls; there will be a crowd whenever you visit, but that’s because it’s worth the stop.

Visitors to the market will also find fresh produce, pastas, olive oils, chocolate-covered cherries, handcrafted jewelry, and table after table of gorgeous tulips in every color imaginable. More than once I wondered if I could get away with taking a tulip bouquet safely through TSA, on the plane, and back to my home in Los Angeles, but I ultimately (and sadly) decided it would be best to leave the flowers behind.

Coffee lovers will get a kick out of seeing the first-ever Starbucks, located across from the market between Stewart and Virginia Streets. Because it lies within a historic district, the store retains its original design both inside and out. Customers can purchase merchandise labeled with Starbucks’ first logo as well as an exclusive coffee blend not available at other locations. 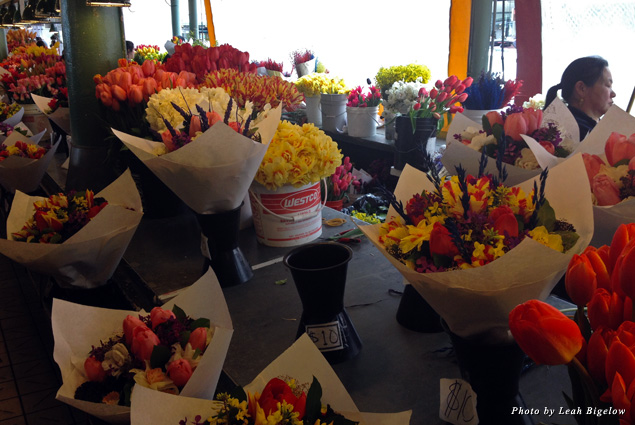 Below Pike Place is the Seattle waterfront, flanked by Elliott Bay and the Puget Sound. To get acclimated with the Seattle from the water we hopped aboard the Spirit of Seattle™ for an Argosy Cruises Harbor Tour. The narrated one-hour tour—included in the CityPASS booklet—departs at Pier 55 and takes cruisers north along the Seattle shoreline up to Piers 90 and 91 then loops back around, passing the Duwamish Waterway, Harbor Island, and Coast Guard Pier. It’s a perfect tour for visitors—and great for locals, too.

Back on land at Pier 59, the Seattle Aquarium treats its guests to several exciting exhibits with birds, fish, a giant Pacific octopus, otters, and seals. We happened to enter the “Marine Mammals” exhibit just in time for the otters’ and seals’ afternoon snack, and it was a delight to watch them interact with the trainers and with one another. We were especially enamored with the sea otters; watching them enthusiastically eat their crab legs snack was way too entertaining. 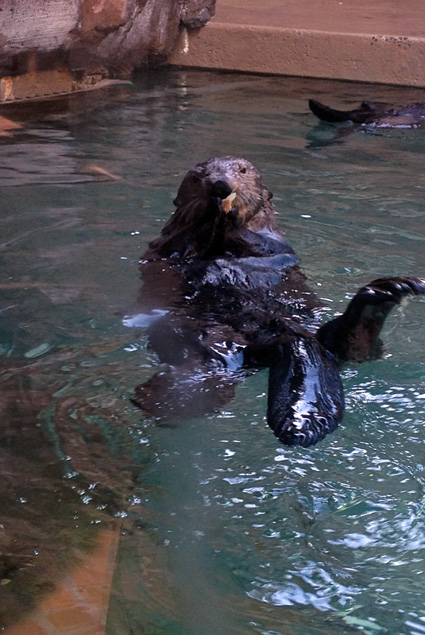 With several of the top tourist attractions crossed off our list, we had plenty of time left to experience the city from a local’s perspective. I have to mention the super-fun bar our hosts took us to called Von Trapp’s, which is in downtown Seattle on 12th Avenue. Drinks at the giant German and Belgian beer hall can be ordered in anything from a 2-ounce taster to a 2-liter boot, and the menu features a house-baked pretzel, schnitzel, a selection of wurst, and other traditional favorites. The best part, however, are the four bocce courts at which diners can play the entertaining game. We spent a good portion of one evening engrossed in a battle of Los Angelenos versus Seattleites—so much so we almost played straight through our dinner plans!

I was also really impressed with Ballard, the neighborhood in which we stayed. Although only 15 minutes from downtown Seattle, the neighborhood has character all its own and, in my opinion, is worth a visit if you’re looking for something a little less touristy. My suggestions: walk through the Carl S. English Jr. Botanical Garden to the Hiram M. Chittenden Locks; bar hop on Ballard Avenue (The Sexton, The Noble Fir, Percy’s & Co) and NW Market Street (Ocho, Hazlewood); and enjoy excellent seafood and a gorgeous view at Ray’s Boathouse. 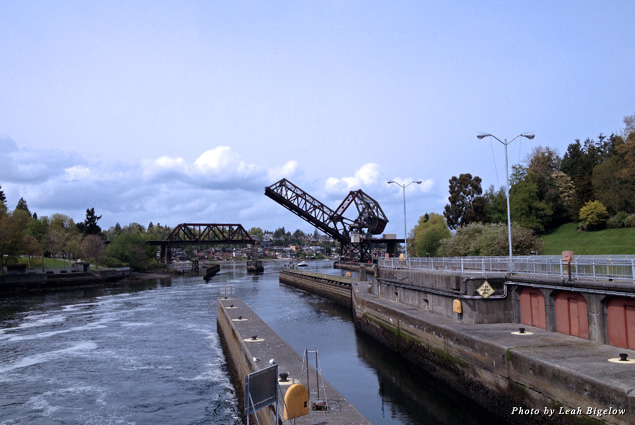 It was a whirlwind three-day visit in Seattle, but I think we made the time count. I loved exploring the city’s icons and discovering what makes the destination so unique, and it was extra-special to spend time with our local hosts and learn about their favorite spots. Even a bit of rain couldn’t stop us from enjoying each day; it only adds, after all, to that wonderful Seattle charm.

Seattle Melts in Your Mouth