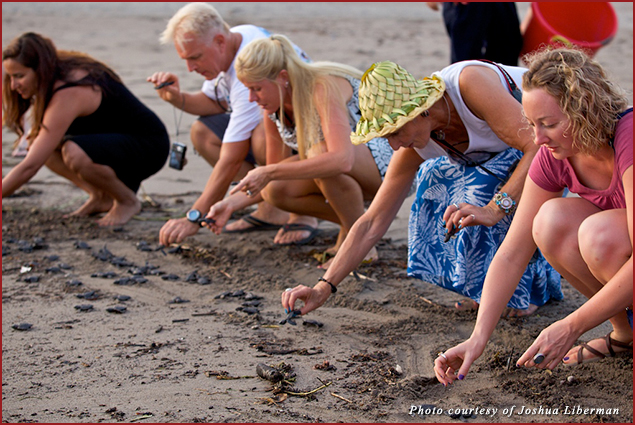 It’s nearly midnight on the beach in Puerto Vallarta and I am crouched down over a small open pit, watching something that looks like a scene from Alien — strange pink flesh and lots of drippy goo.

Over the pit, right at my eye level, an enormous sea turtle is heeding the strongest call of nature and laying dozens of eggs, which drop down into the pit like tough, rubbery ping pong balls, bouncing a little before coming to rest on top of their future brothers and sisters.

I am surrounded by members of our spiritual tour group, each equally fascinated and all perfectly still as we watch this ancient ritual take place as if we aren’t even there.

Behind us hovers the biologist from Casa Magna, the gorgeous resort whose turtle rescue efforts amount to over 60,000 eggs in 2012, nearly 35 percent of the sea turtle rescue in Puerto Vallarta. He’s a young fellow, and tourists or not, he comes out seven nights a week to wait for the turtles to do their thing so he can collect their eggs.

His window is very narrow, just three hours, so the first thing he does is sweep the beach looking for signs of the wavy flat tracks the turtle flippers make as they move away from the surf and toward their urgent business.

Once the turtles dig their pits and lay, which can take an hour or more, they sweep sand across the hole until their eggs are buried in a foot of fine blond grit, then lumber back toward the ocean and hope their progeny survives.

The biologist, clock ticking, is likely to pull the turtle off the open pit as soon as she has concluded the laying, so that he saves the trouble of having to dig up the eggs she has just buried. 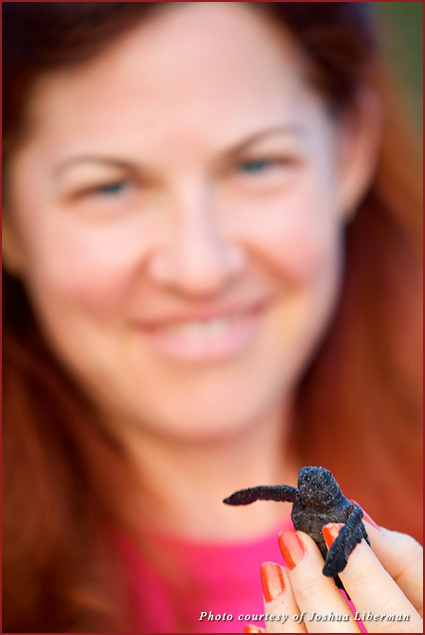 He will bring the full cache back to an enclosed tennis court-like nursery at the Casa Magna Resort and bury them again, where they will hatch in 45 days.

At that time, they will be brought to the beach at sunset and handed out to all the Casa Magna guests gathering to take a minuscule part in this rescue effort, who will encourage their tiny turtles back into the sea, sending them off with prayers and good wishes for survival.

I named my two hatchlings Peace and Grace, and whispered words of hope to them as I sent them off into the sea. Unfortunately, despite everyone’s conscientious efforts, the statistics are not good. Just 1 to 2 percent of all the sea turtles will make it back to the beach in a few years to lay their own eggs.

Even as we watch, a few of the hatchlings drown or give up before they even reach the water. Predators, even inadvertent ones such as man’s boats and ski jets, will all take their toll. Eventually, perhaps less than 2,000 of the over 170,000 sea turtles born here in Puerto Vallarta each year will live to adulthood. 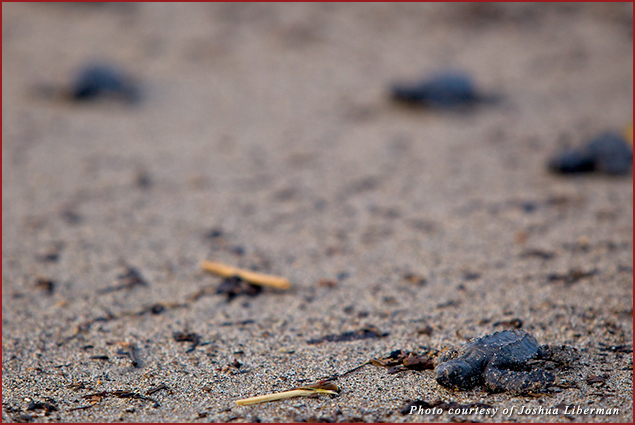 For Casa Magna, this free program is just a part of their participation in helping to maintain balance in Puerto Vallarta. For me, it’s a chance to unexpectedly connect with nature and experience something new, and despite the goo and the lack of sleep, I’m thrilled.

Every night, the biologist will be here, ensuring the continued survival of these magnificent creatures, and I will sleep better, knowing that Grace and Peace—or their brothers and sisters—are swimming into their place in the world.

The sea turtle rescue takes place from June through December; visit Casa Magna January through May and you can enjoy spectacular whale watching instead.