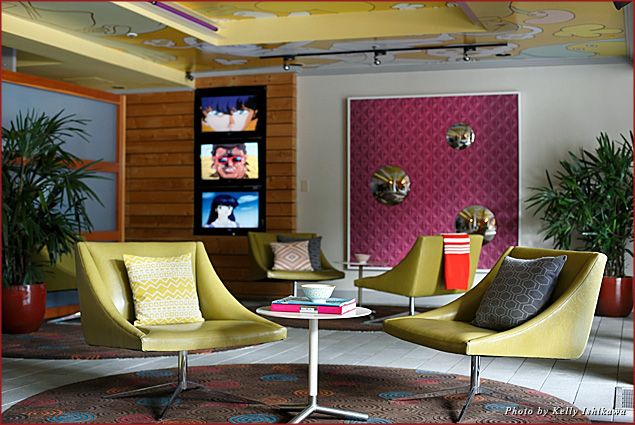 Creativity is always a wonderful selling point so jet setters take note: Joie de Vivre (JDV) boasts plenty of it. Founder Chip Conley made that one of his main thrusts when he first launched the hospitality enterprise more than a decade ago. Today, with nearly 30 hotels to choose from, JDV has become one of the world’s most enterprising hotel lines in the nation. Perhaps it was Conley’s original vision to have each one of his hotels boast a certain artistic theme or vibe that helped make these portals stand out. Regardless, those inventive ideas might have influenced some of the unique themes found in a number of other hotel lines around the country today.

If the trick is getting travelers in the room, then the real magic of JDV lies in how it continues to impress its visitors by offering a terrific mix of one-of-a-kind hospitality and unique vacation packages. 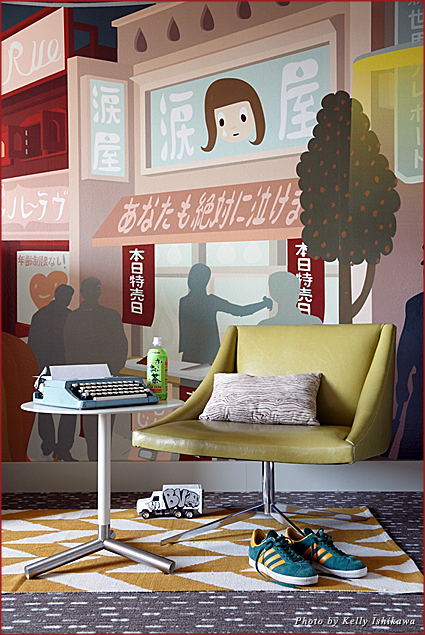 My room, overlooking Sutter Street and some of Japantown’s exceptional markets and restaurants (this has to be one of the cleanest, respectfully quiet neighborhoods in all of San Francisco), was adjacent to a playroom/game room suite. Travelers and families with four or more should seriously consider this option because this suite sports a stunning large-screen television and plenty of games for the younger set. It’s also nice to have the main room open up into the larger suite, allowing space for the clan to move around.

But other rooms I toured stood out, too, and the combination of cleanliness and artsy innovation and design is something to behold here. We also appreciated signature touches of hospitality—specialized bottled waters, lucky Japanese cat figurines, and snacks. 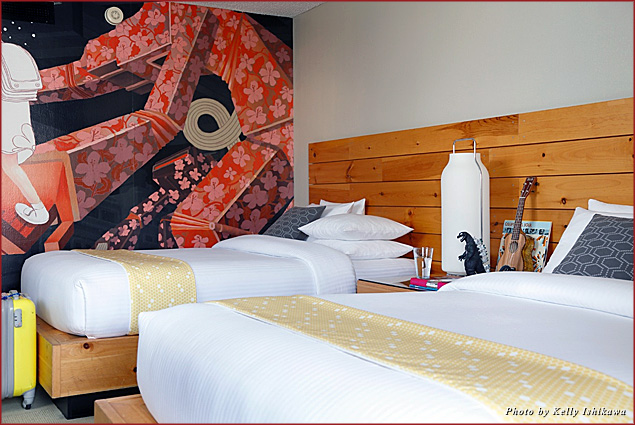 For meals, there is plenty to savor in and around Japantown, but visitors should consider Mums (formerly Café Mums) at the base of the hotel. Revered for its Shabu-shabu—thinly sliced rib-eye  and vegetables, which are cooked and prepared at the table in an iron pot and served with tasty dipping sauces—Mums wins points for its longevity and diverse menu. But there are other notables in the area, Ino Sushi and Isobune Sushi among them.

(Actually you can find so much sushi in Japantown, but I fancied the fresh sushi in the market just across the street. Owned and operated by locals, like many of the markets in the area, I could taste the crafty handiwork that went into my spicy tuna offering.)

Highly recommend: walking down the block and up Fillmore Street, one of San Francisco’s most vibrant thoroughfares. Here you will discover a vast array of gift shops, charming cafés, and even more sushi bars. Three spots to consider: La Méditerranée, Ten Ichi, and Wine Jar.

Additionally, Hotel Tomo is close to another San Francisco icon: Sundance Kabuki Cinemas. It is also near Kabuki Springs & Spa.

For the former, visitors might appreciate seeing an art house film; the stunning cineplex is inspired by Robert Redford’s Sundance Film Festival and offers a nice mix of art house films and first-run features (not to be missed). As for the spa, over the years it has earned a good reputation for its high-end services. Check the spa’s website as some days and nights are delegated to men or women, but most times the establishment is co-ed; it offers some of the finest professional massage in all of San Francisco.

Other goodies await nearby, too. Pacific Heights, one of San Francisco’s grandest and most luxuriest neighborhoods, is close by and never dull for a stroll. But don’t be afraid to venture away from Japantown, too. During our stay we made a short trek into Union Square, where plenty of shopping and culinary options await. While you’re there it’s not that far from the Embarcadero, which now showcases The Bay Lights on the iconic Bay Bridge; this inventive LED artwork by artist Leo Vilareal is a must-see.

There’s plenty more to experience, of course—this is San Francisco, after all. But high marks should be given to Hotel Tomo’s customer service and overall spunky appeal.

Elsewhere, I discovered something that truly stands out here: the JDV Gives program. The hotel group is part of a resilient grassroots entity that goes the distance and gives back to the community in a positive way. As a result, JDV donates a minimum of $200 per guestroom per year to organizations in their communities. How it works: Each hotel participates in the “You Can Make a Difference” program. The main goal is to inspire hotel guests by giving them the option to add an additional $1 to their total bill for each night during their stay. (You can opt out of the program at checkout.) 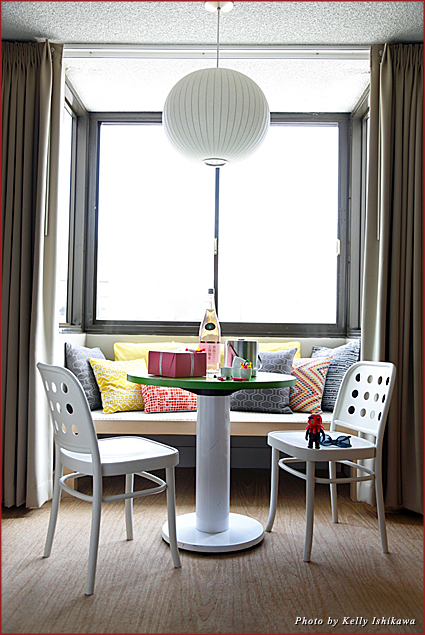 Hotel Tomo’s philanthropic cohort in this venture is America Scores Bay Area, which offers “significant recreational and academic opportunities for at-risk youth in the heart of San Francisco.” Along with SF Recreation & Parks and various local public schools and nonprofit service providers, America Scores turned heads with it launched the America Scores Civic Center Soccer League, which was basically designed to engage local youth in physical activity—in this case via soccer.

Other JDV hotels, such as Hotel Kabuki also give back. Kabuki’s interest in the National Japanese American Historical Society, a strong advocate for the dedication and preservation of the Japanese American experience, is commendable.

That bit of philanthropy is a wonderful touch, and it only adds to overall appeal found at Hotel Tomo. But I keep coming back to a well-known Japanese saying: “The environment makes our characters.” If that is the case, then expect to walk away from here soothed and rejuvenated.