San Francisco: Can You Top It? 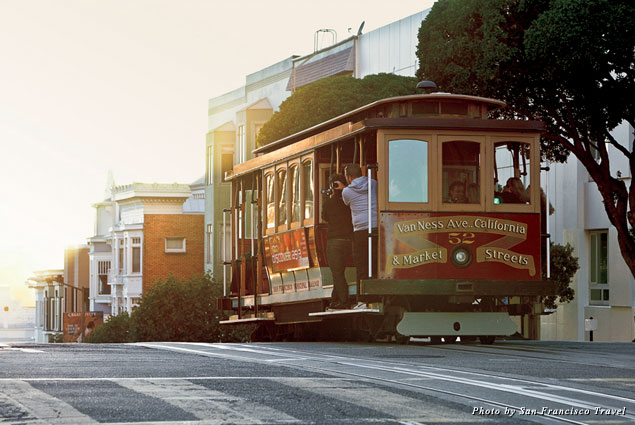 My boyfriend, Kenny Baker, had been to San Francisco twice and loved it. “Now I want to show you what I love about this great city,” he told me. “The museums, restaurants, and shopping are amazing. We can walk and take trolleys and ferries, and the views everywhere are unbelievable. You’ll see…”

Our adventure began at the swanky Hyatt Regency Embarcadero. The 17-story atrium lobby impressed us, as did the fantastic views of the San Francisco Bay and the city skyline from our balcony. The staff was warmly welcoming, especially the concierge, who gave us maps and discount coupons.

We bought two San Francisco CityPASS bundles prior to arriving. These offer substantial discounts for many attractions, including the California Academy of Sciences, so we wasted no time getting there. The innovative Golden Gate Park museum features an authentic rain forest (think snakes, birds, butterflies, and red frogs), a coral reef aquarium (sea horses, Manta rays, sharks), dinosaurs, a rooftop garden of indigenous flowers and plants, and even live penguins and an albino alligator. We explored like happy children until the museum closed.

A short cab ride dropped us off at beautiful Union Square. Back in 1850, Civil War rallies were held in the grassy public space. By 1903, the dramatic 90-foot-tall Goddess of Victory statue graced the square. After the Great Earthquake of 1906, Union Square became retail central.

“Let’s shop till we drop,” suggested Kenny. Turning in circles, I wondered where to begin: Macy’s, Saks, Neiman Marcus, Bloomingdales, Kate Spade, Vera Wang, Crate and Barrel, Tiffany & Co…. Add another 500 upscale boutiques and you get the idea. Many hours later, I’m happy to report we both did major damage.

Of course, we needed another week to enjoy San Francisco’s charms: the de Young Museum in Golden Gate Park; jazz clubs in The Fillmore District; the Peace Pagoda in Japantown; dim sum in Chinatown; the symphony, opera, and ballet at the Civic Center; and fresh Dungeness crab at Fisherman’s Wharf. 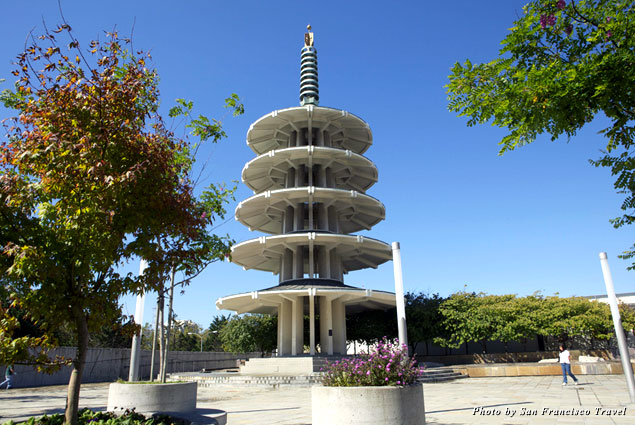 But Ken wanted to show me Muir Woods, “home to the largest and oldest redwoods in the world,” he remembered. “Wait until you’re hugging one of those 600-year-old trees; you’ll find out what majestic means.”

Muir Woods National Monument is a remnant of ancient coastal redwood forest. William Kent and his wife Elizabeth bought land here in 1905 to protect one of the last uncut stands of redwoods, donating them to the federal government for permanent protection. In 1908, President Theodore Roosevelt used the 1906 Antiquities Act to proclaim the area a national monument, and the area was named in honor of conservationist John Muir.

As Ken and I walked quietly along sun-dappled trails, we were transformed by the serenity and sacredness of these beautiful giants. Alongside clear creeks we listened to bubbling water and the call of Pacific Wrens. Thriving under the canopy were bright green sword ferns and soft fuzzy mosses. Wildflowers added splashes of pink, white, and violet. After the happy craziness of San Francisco, our frazzled nerves relaxed. We became ardent tree huggers, craning our necks to see the tops vaulting skyward.

I had no choice except to follow my man, to the next surprise.

We hopped into our spiffy black Chrysler convertible and drove to Carmel. From there, we careened along the coast on 17-Mile Drive. We stopped to photograph tiny half-moon beaches, giant waves crashing over boulders, and the world famous Lone Cypress, standing solo out over the ocean. We passed magnificent estates of the mega rich, watched deer grazing peacefully on famous golf courses such as Cypress and Spyglass, and played with hermit crabs and baby starfish in mysterious tidal pools.

“Ok, I give in, Ken. San Francisco was amazing, Muir Woods was inspiring, but this Pacific Ocean landscape is over-the-top fantastic. You can’t top this, so let’s go home now,” I kidded him.

Ken seemed nervous, driving as though there was some agenda more than sightseeing. Suddenly, he veered into a parking spot at The Lodge at Pebble Beach and Pebble Beach Golf Links and commanded, “Get out, let’s have lunch.” What’s up with him, I wondered.

On the terrace, we enjoyed a delicious lobster/crab salad, along with 100 other happy tourists. Ken seemed hyper, but I figured he just needed a second glass of wine to relax after so much touring and driving.

“Let’s walk down to the 18th green,” he suggested. “Maybe we’ll have some dessert.” Dessert? On a golf course? 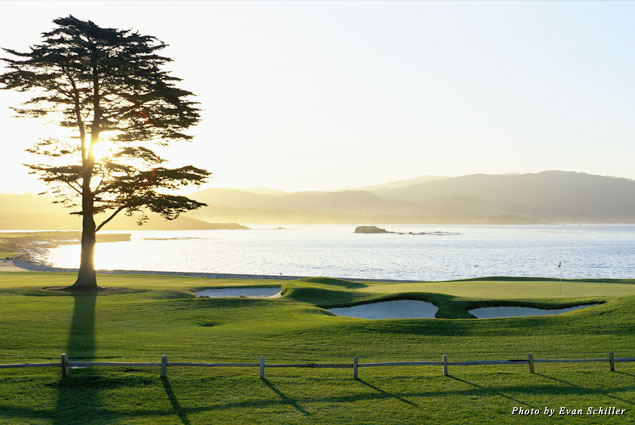 I followed him like a lovesick puppy, getting out my camera to photograph one of the world’s most famous golf courses. Turning back to face the restaurant, I saw the maître d’ carrying a silver dome-topped platter and a waitress carrying two glasses of champagne.

To my complete surprise, Ken dropped to one knee.

“I love you Sharon. I want us to be together, forever and a day. Will you marry me?”

The maître d’ lifted the silver dome with a practiced flourish. Glittering in the sun was a stunning diamond ring.

I went kind of insane. I’m not completely sure what happened next. But there was hugging, kissing, champagne sipping, applause from everyone at the terrace restaurant, and a cluster of over-excited Italian ladies hugging me and proclaiming “Ciao Bella! Bellissima!”

Did I dream this unexpected, romantic, incredible proposal?

I guess not, as I’m looking at a gorgeous ring on my finger, and I see Ken’s gorgeous blue eyes smiling at me every day.

I’d toured beautiful San Francisco, Muir Woods, and the Pacific Coast as Ken’s girlfriend. Now I’m his beloved fiancé. Am I the luckiest girl in the world or what?

Some things in life you just can’t top. Don’t even try. But visit San Francisco and see what magic awaits you.