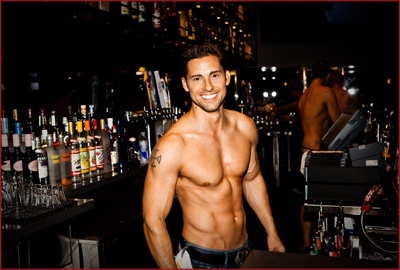 What it is: the bar staff
Where to find it: Revolver, West Hollywood, CA
What it costs: free to look at
Why you want to be there:

West Hollywood has long been known as one of the best US destinations for gay travelers because of its great weather, fetching locals, and robust nightlife. In the 80s and 90s, one of Weho’s best-known hangouts was Revolver, famous for its revolving door, great cocktails, and endless barrage of (then) cutting-edge music videos.

And now, after nearly a decade as another establishment, Revolver is back in the same spot, this time under the creative vision of LA restaurateur Alfredo Diaz and Flower Films co-president Chris Miller. The crowd-pleasing mix of inexpensive drinks, video mash-ups and, yes, the revolving door have also returned. What’s new, however, is the slick décor, state-of-the-art HD video/sound system and the game room in back with billiards and darts. Oh, yes, and then there’s the sexy, charming, and capable staff (see photo above!).

Recently, I was lucky enough to have the beefcakes behind the bar let me be the first to try one of their new signature cocktails, The Revolver, a tummy-warming mix of Bullet bourbon, coffee liqueur, orange bitters, and a dash of freshly squeezed lemonade. It’s a spot-on libation for watching a Madonna rock block, a best-of compilation of Lynda Carter twirling into Wonder Woman, and the 1,000th remix of Dead or Alive’s “You Spin Me Round (Like a Record).”

Revolver is located at 8851 Santa Monica Blvd., West Hollywood, CA. Visit their website for details, including info on upcoming events.