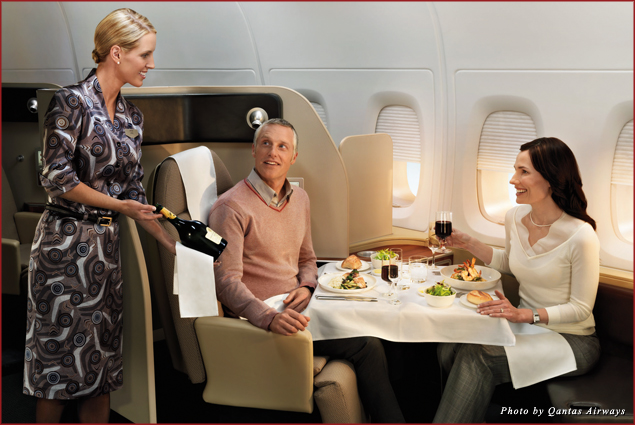 Frequent travelers know it’s not always easy to find quality food when you fly. Airlines themselves have faced an uphill battle to find ingredients that maintain their delectability at 30,000 feet in the air. Aspiring to provide top-notch service on all its long-distance flights, Qantas Airways, the “Spirit of Australia,” has had Australian chef, restaurateur, and author Neil Perry as a consultant for its in-flight meals for the past 16 years. 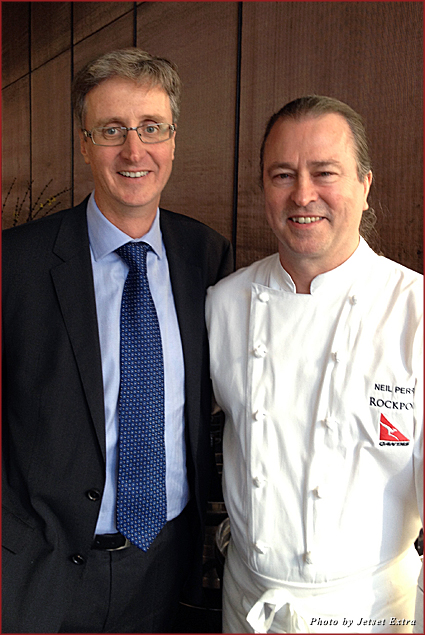 “For me, it’s a relationship that’s a lot bigger than just consulting,” Perry says. He adds that Qantas asked for his advice and actually took it, letting the chef meet with the cabin crew to teach them how to prepare and deliver the food while in the air.

Chef Perry heads Rockpool, a restaurant in Sydney, Australia, along with Rockpool Bar & Grill and Spice Temple in both Melbourne and Sydney, The Waiting Room in Melbourne, and Rockpool Bar & Grill Perth. He also runs a six-person staff that works solely on the Qantas product. Qantas recently invited Jetset Extra to lunch at Craft Los Angeles to sample chef Perry’s cuisine and get a feel for the fare the airline serves in the sky. 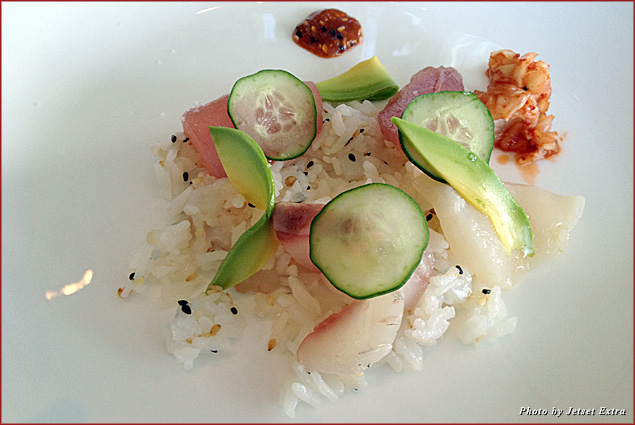 The meal began with chirashi zushi of tuna with kingfish, prawn, squid, and scallop. The brightly colored plate provided a light sampling of raw fish over rice and topped with thinly sliced cucumber and avocado.

Course No. 2 featured poached John Dory complemented by paprika and macadamia nuts with basil pistou. This was another refreshing dish that was both light and satisfying. The third course was a mouthwatering concoction of slow-cooked lamb loin with artichokes, Yukon gold potatoes, and preserved lemon. 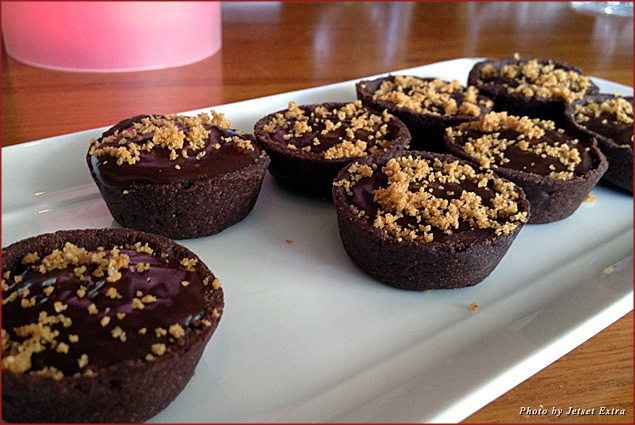 For dessert, our table shared dangerously addicting, bite-sized chocolate tarts paired with Shingleback “Black Bubbles” Sparkling Shiraz. It was the perfect end to a perfect lunch, one that could surely be enjoyed while flying.

According to Perry, while these are the sorts of meals one would find at Rockpool in Australia, there are in-flight dishes inspired by the Sydney restaurant’s menu. “We’re a very multicultural country in Australia so I try to draw on all of that,” Perry says. He takes influences from cultures including Asian, Moroccan, Middle Eastern, and European. A dish might have an Indian influence or a Thai influence or a Chinese influence without necessarily being Chinese, Thai, or Indian. Instead, Perry says, it’s a fusion of flavors with a focus on fantastic ingredients. Meals on flights out of Australia are made with Australian ingredients, but those on flights out of the United States highlight what the US does best. Chef Perry says he loves using great, seasonal American ingredients such as wild mushrooms, asparagus, and Mission figs, adding, “We really try to focus on what’s in season here and what’s beautiful.”

Since a good meal on the ground doesn’t always translate to one in the sky, chef Perry tries to be very practical by understanding what a catering center in a particular city is capable of and asking its workers to perform tasks that they can achieve. “I’ve been pragmatic in my approach to make sure that we can deliver, and then the catering centers are going to play their part,” Perry says. 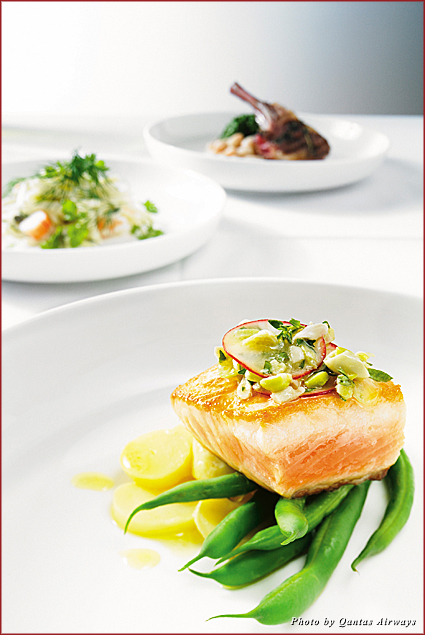 Qantas and Perry were the first to offer a degustation menu for first and business class passengers; fliers can select up to 12 main courses, paired with a choice of more than 300 Australian wines. Premium economy class passengers have access to a Neil Perry-inspired menu as well as access to the Qantas premium wine list and other refreshments, while economy class passengers have a choice between two main meal options along with an assortment of goodies including ice cream, hot chocolate, herbal tea, and fresh fruit. In Qantas’ A380 planes, passengers in all classes can also visit the self-serve snack cabinet for a complimentary quick bite.

“You have a lot of very sophisticated travelers who are used to staying in great hotels and eating well so our food has to align with the rest of the products,” Perry says. “A lot of our first class passengers will just get on board, get in their pajamas, decide what movie they’re going to watch or do a little bit of work, order a glass of red and a steak sandwich, and they love that because it’s really great comfort food.”

Comfort, it seems, is the key word when it comes to a perfect in-flight meal. Simple dishes made with quality ingredients go a long way in providing passengers a satisfying flight, and Qantas and chef Perry certainly seem to have it down to a fine art.

“The Trip” 1: Winston-Salem to Nashville Brit on the Boulevard: Fall 2012