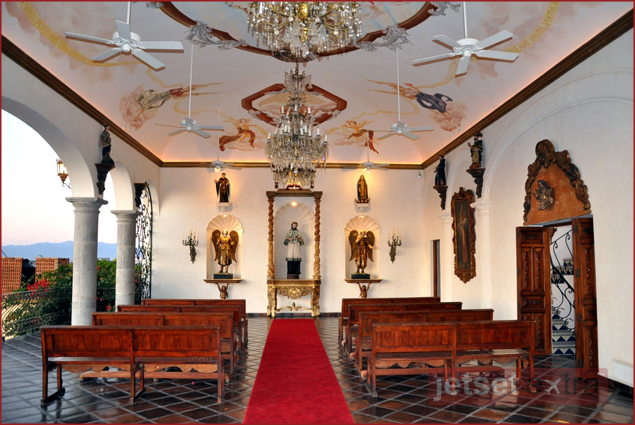 Overcrowded sandy beaches of Bahia de Banderas; seaside promenade El Malecon with whimsical sculptures; bars and discothèques open through the wee hours where tourists mingle with the locals and drink, laugh, dance, and kiss – see these and you know you are in the most popular destination on the Mexican Riviera. But walk up one of the narrow cobblestone streets framed with bougainvillea blossoms, and you’ll find an old town with its modest casas open to the cooling night air. 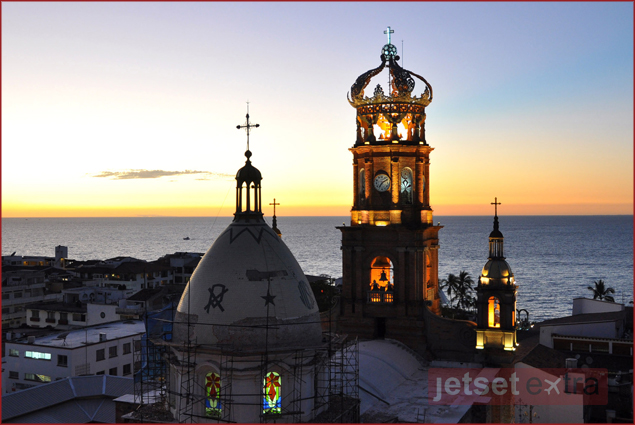 A stunning view of the illuminated Iglesia de Guadalupe is all yours if you are staying at Hacienda San Angel. From our private terrace my silver-anniversary husband and I could watch a flaming sunset peeking through the Nuestra Señora de Guadalupe openwork dome, modeled after a crown worn by the last Empress of Mexico Carlota, Emperor Maximilian’s wife. The Emperor was appointed by Napoleon III as a result of the French intervention, and after the defeat of the French troops his short rule (1864-1867) came to a tragic end and he was executed by a firing squad of President Juarez. Carlota’s attempt to prevent his execution by pleading for help with the Pope and the royal houses of Europe proved futile. She went mad, and spent the next 60 years of her life close to her native Belgium and her late father King Leopold’s I court, never returning to Mexico. I had a chance to learn these fascinating historic facts while browsing the web under a full moon and to the beautiful sound of the Guadalupe’s tolling bells – not exactly conducive to a good night sleep. ‘Twas a night before Sunday, and the bells were tolling more often and more insistent than any other night, calling the faithful to the morning Mass. When a pearly dawn colored the sky behind the Carlota’s crown in powder blue and pink hues, I was ready for a white tablecloth breakfast of fresh fruit and freshly baked pastries – a Hacienda treat served to guests in their rooms, balconies, terraces, or at the white-tablecloth restaurant with a postcard-perfect view of the town. 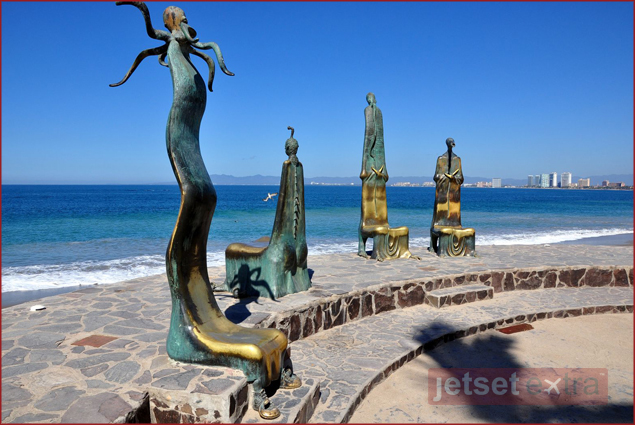 Hacienda San Angel is a boutique luxury resort, and it has a theme implied by its name. Antique religious artifacts abound in the suites, hallways, intricate stairwells, and patios of the Hacienda, owned and lovingly maintained by an ex-San-Franciscan Janice Chatterton. For years, she used to come to Puerto Vallarta on vacation, falling deeper and deeper in love with the town, and getting more and more involved with the friendly and unpretentious local community. She finally acquired a property here in 1990, and not just any property, but a villa owned by Susan Burton, Richard Burton’s wife. In times of “The Night of the Iguana” filming (1963), with the Burtons and Elizabeth Taylor and all the “Iguana” stars present, Puerto Vallarta became an instant hit with the media. The shooting of the Tennessee Williams cult classic here brought about so much celebrity gossip that it made the trend-watching public aware of the city filled with sunshine and sea foam, creative freedom and passion. It ultimately put the town on the map of discriminate vacationers everywhere. 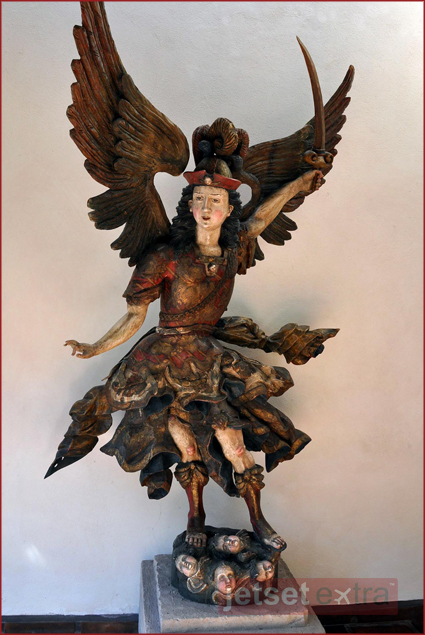 Armed with the Hollywood past of the legendary villa and with her own risk-taking abilities, Chatterton embarked on a complex design and renovation adventure. She bought other nearby villas and eventually created a unique hotel with its own non-denominational wedding chapel open to the ocean breeze and the Sierra Madre Mountains with a white-walled town nestled in the foothills. While entering the Hacienda from a sun-drenched dusty street, you’ll find yourself in a cool shady courtyard of a Mexican Colonial castle with tiled floors, tinkling fountains, lush potted plants and angel statues coming from every imaginable art tradition and time period. It might look like a perfect place for someone whose time has come to think about the soul, however, the Hacienda is well-loved and booked through and through for weddings and honeymoons. With the friendliest and most helpful staff, in this place every guest is being treated like royalty. Add to it the ambience that is beyond luxurious with artwork and antique furnishings in every room, lacy bed linens and hand towels (embroidered by nuns?…), little white soaps shaped as angels, and yes, a honeymoon here would be a dream and a treasured memory. To make a one-of-a-kind experience complete, there are three blue-tiled swimming pools on the property, a sunset observation terrace, where guests can enjoy their cocktails, and a full-service gourmet restaurant with a nightly mariachi entertainment, where American ex-pats love to congregate. 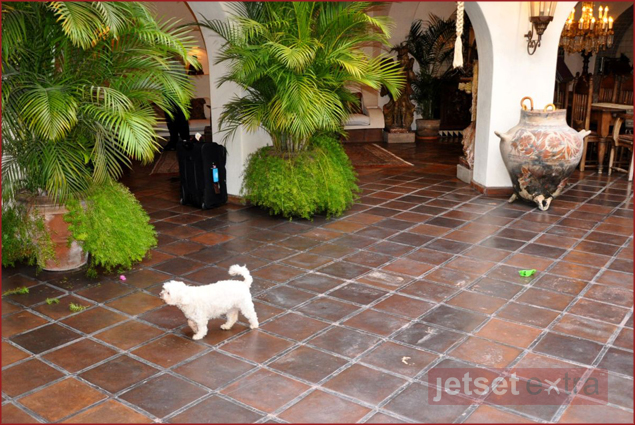 During our short stay at Hacienda San Angel (don’t you just love the very sound of it?), we witnessed a young and lively California couple arranging their upcoming wedding; newlywed and anniversary couples, and groups of vacationers, celebrating birthdays or just having a great time. At the soul of it all, constantly present, always calm, smiling, and hospitable, is the owner, accompanied by her pets – mostly Poodle-Maltese mix little white dogs – all groomed and clean, with tiny pink bows in their unruly curls. And then I’ve learned that Chatterton, who contributes to various local charities and is especially active with SPCA of Puerto Vallarta, rescues abandoned dogs and tries to find them new homes. We counted eight rescued dogs happily prancing around the courtyard, sleeping under antique chairs, or licking ice from a water dish, and although she said some of them were for adoption, somehow it was clear that if there wouldn’t be any takers, the dogs would not be abandoned – not on her watch. Learn more and make reservations at their website.