Potsdam 2012: A Birthday Bash for Frederick the Great 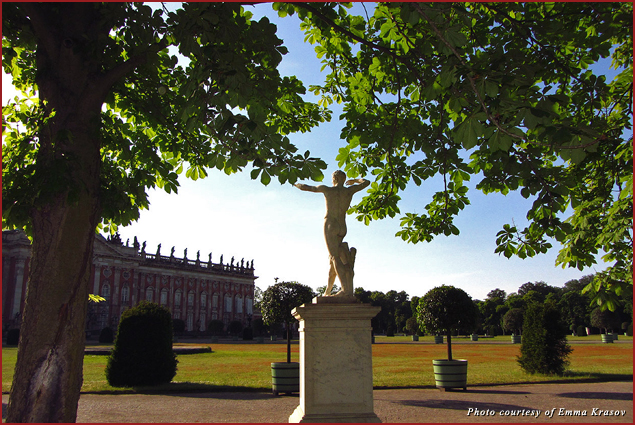 “Friederisiko” celebrates the 300th birthday of the most famous King of Prussia – its enlightened despot. Despots of the 18th century – even enlightened ones – are not the historical figures I typically turn to in search of inspiration. However, during my recent trip to Potsdam, Frederick II (the Great) – who ruled Prussia from 1740 to 1786 – captured my imagination.

A controversial risk-taker, Frederick the Great managed to pull Germany from the backwaters of Europe and climb to the peak of political power. I was stunned by his New Palace, decorated with colored gems, and awed by the Sanssouci Palace and Park – his refuge from officious Berlin. However, what endlessly fascinated me was his character – a study in contrasts. 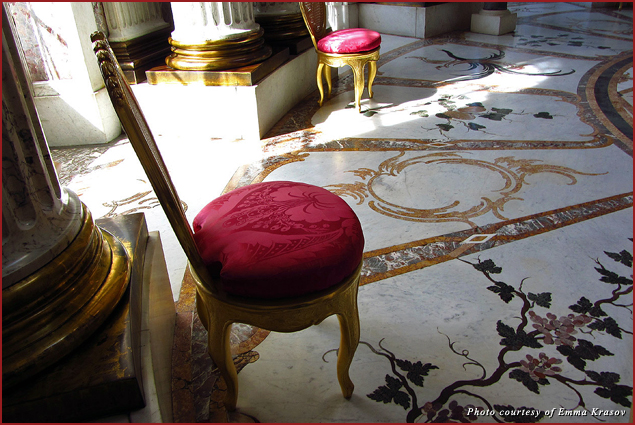 Frederick’s Risk, or “Friederisiko,” is a major exhibition organized by the Prussian Palaces and Gardens Foundation in Potsdam to celebrate the king’s 300th birthday through October 28, 2012. The exhibition, divided into 12 themes, presents Frederick the Great – the man and the ruler – on a discovery tour through 70 rooms of the New Palace, some open to the public for the first time. Contemporary installations and actor impersonations of the court ceremonies are part of the exhibition. 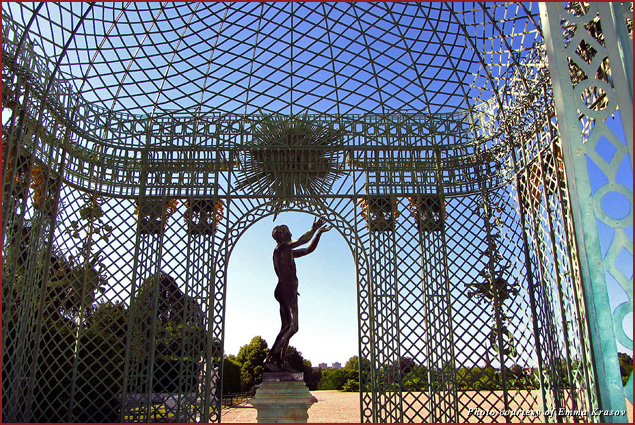 I traveled to what was formerly known as East Germany, or the German Democratic Republic (GDR), out of morbid curiosity. Hailing from Russia (the mothership of the historical Communist Bloc), I felt drawn to this onetime satellite of the former Soviet Union. Little did I know that I was about to find a prosperous land of dense forests, flowering meadows, hills, and lakes – and 500 castles – all waiting to be re-discovered by the traveling masses.

I joined a walking tour of Sanssouci led by Kevin Kennedy – a tour guide and a local Potsdam celebrity who delivers tons of relevant information in perfect English. Kennedy, the son of a German mother and an American GI father (a rather typical child of the GDR era) is working on his Ph.D. in history, focusing on military orphanages of Potsdam. Those were implemented in the 1720s and expended by the childless Frederick the Great, who considered Prussian soldiers his “children” and strove to create a nation of military men.

“As a child, Frederick II was cruelly ridiculed by his father, Frederick William I, for lack of masculinity,” Kennedy said. “Ultimately, his father was pushing him to suicide so Frederick’s brother could inherit the throne.”

Apparently, in his younger years, the future King of Prussia hated the mandatory military exercises, the daily religious studies, and the discipline of the Berlin court, so he settled in the white-walled medieval Rheinsberg Castle in Brandenburg and made it his primary residence. “He called it a ‘court of muses’,” Kennedy said, “and hosted actors, dancers, and painters, played flute, and composed sonatas.”

Frederick’s artistic inclinations did not prevent him from becoming the brashest Prussian conqueror and doubling the territory of his kingdom through several risky and lengthy military operations against the surrounding nations. His tactical genius was legendary. He prevailed in the Seven Years’ War despite the much greater opposing forces of Austria, France, and Russia.

As a ruler, Frederick initiated domestic reforms that included religious tolerance and freedom of the press. He created the first German legal code and set rules for public education in Prussia. He also built roads, financed agricultural reforms, and introduced potatoes to his countrymen.

I enjoyed this last-but-not-least part of his legacy along with smoked fish, cured meats, and just-from-the-oven breads served on a white tablecloth at the lavish buffet breakfast included in the room price of my hotel. 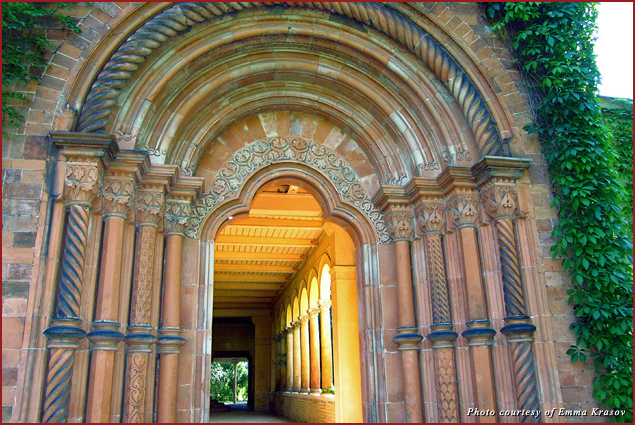 Potsdam, once the official summer residence of the Prussian kings, is now the capital of the federal state of Brandenburg and a UNESCO World Heritage site. Located just a 20-minute drive from Berlin, Potsdam is known for its palaces – many of them commissioned by Frederick the Great.

The enormous New Palace was built to commemorate his victory in the Seven Years’ War (1756-1763), which established Prussia as a powerful European state. For this monument to himself, Frederick chose an opulent Baroque style, which was going out of fashion with the advance of neoclassicism but still symbolized power and inspired awe.

Four hundred statues line the roof and the walls of the massive sprawling structure. Inside, the grand halls are decorated with 20,000 chunks of amethyst, topaz, opal, and agate, rare shells, crystals, and multicolored Carrara marble. The mosaic floors were built to be observed from the upper galleries, and dancing on them was prohibited.

The King’s favorite summer palace, Sanssouci (“carefree”), is surrounded by neatly landscaped gardens and was conceived as the “Prussian Versailles” where he would spend most of his time – practically moving his court from Berlin to Potsdam. Reflecting Frederick’s enchantment with the landscape and architecture of Italy, a terraced vineyard, split by a grand staircase, extends downhill from the Rococo building. In Sanssouci, Frederick also built the Friendship Temple (dedicated to his sister Wilhelmina) the Antique Temple, Belvedere, and the Dragon Pavilion.

He also reconstructed and modernized downtown Potsdam. Although Frederick commented on his father’s “bad Dutch taste,” the classic red-brick Dutch quarter still remains and is now filled with artisan shops and restaurants that habitually serve local seasonal fare, like white asparagus in the spring – silky and tender with butter-and-lemon hollandaise sauce. 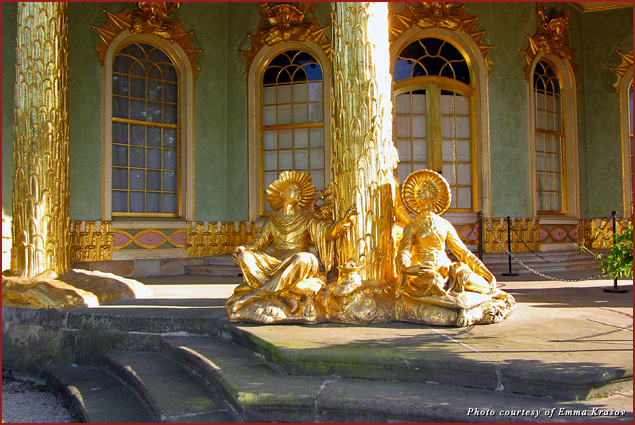 A King of Contrasts

He called himself the “servant of the state,” but didn’t like to see his own servants, so he built hidden hallways for them in his palaces. He banned torture and barred his court from interfering with the justice system, but was a ruthless politician, invaded neighboring countries and changed their borders. Frederick was close with his sister but hated his wife, Elizabeth of Bavaria, and prohibited her from visiting his palaces in Potsdam. He was known as an extreme misogynist throughout his lifetime.

To decorate his palaces, he chose artwork depicting women as depraved and treacherous creatures or as men’s toys. In the Sanssouci music room, Frederick placed a painting dedicated to Ovid’s classic legend of Pygmalion – a sculptor who created a statue of a beautiful woman, Galatea, and brought her to life. Court artist Antoine Pesne modeled Galatea after a famous Venetian ballerina, La Barbarina, who had narrow, boyish hips and was therefore considered beautiful by the king.

In the wrought-iron Sun Pavilion, just steps from Sanssouci Palace, Frederick installed an antique bronze statue of a young man from Rhodes. During his rule, this statue was thought to be an image of Antinous – a deified lover of Roman Emperor Hadrian – and served as a “rainbow flag” of the time. Was Frederick gay? Voltaire thought so. Andy Warhol did, too. His 1968 portrait of Frederick the Great is the last artwork on the Sanssouci tour, placed by the palace exit. 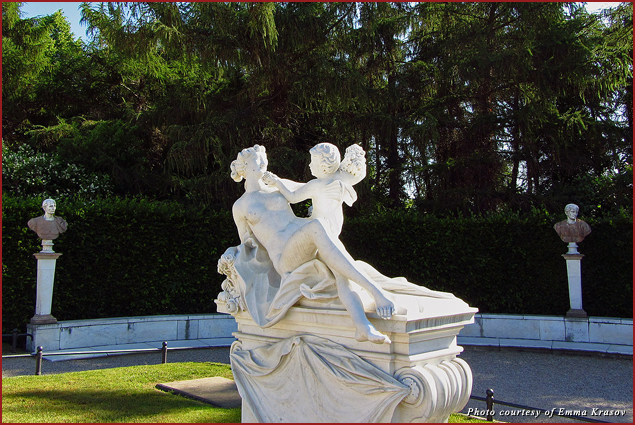 Frederick considered Christianity a fairy tale, detested his predecessors, and wrote in his will that he shouldn’t be laid to rest in the Berlin Cathedral with other members of the Hohenzollern dynasty, but instead on the vineyard terrace in Sanssouci. In his older years, he repeatedly stated that he preferred the company of his dogs to the company of men and wished to be buried next to his beloved Italian greyhounds.

The grave of Friedrich der Grosse is marked with the same humble tombstone as those of his dogs. The only monument at his burial site is a marble statue of the Roman goddess Flora playing with baby Zephyr – a symbol for spring.

Getting There
Lufthansa flies from SFO to Tegel Berlin airport with stopovers in Frankfurt, London, or Munich. Taxi from Tegel Airport.

What To Do
The “Friederisiko” exhibition from April 28 through October 28, 2012 at the New Palace in Sanssouci. More information: friederisiko.de, spsg.de, potsdam.de.