Polar Bears Out My Window 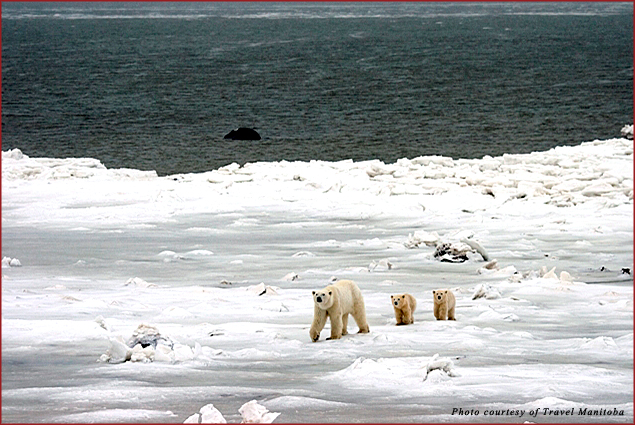 Churchill, in Manitoba, Canada, is known as the “Polar Bear Capital of the World.” On my flight aboard Calm Air, I relaxed with the onboard magazine, “Up Here.” One story grabbed my attention: “Polar bears are the largest, strongest, and most bloodthirsty of Arctic predators,” wrote Dean Cluff, wildlife biologist for the Northwest Territories government. “They only know how to hunt and kill to earn their next meal.” 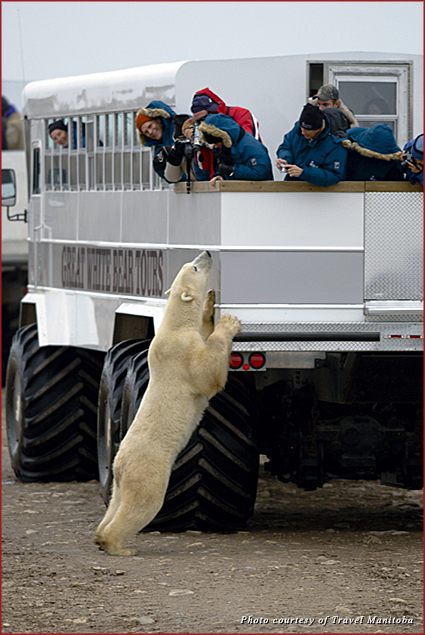 I was on my way to join Churchill Nature Tour’s “Polar Bear Adventure.” Of course, I knew they would take good care of me, but was I really ready to encounter bloodthirsty beasts? I hopped off the plane into the frigid air, wondering if I would need my return ticket.

POLAR BEAR LORE – FICTION VS. FACT
Before climbing aboard a polar rover and heading into the tundra, our group toured Churchill’s fascinating “Eskimo Museum.” Dedicated to advancing knowledge of Northern culture, with a focus on the Canadian Inuit, the beautiful exhibits include stone, bone, and ivory sculptures, as well as archaeological and wildlife specimens. A black-fanged 12-foot long polar bear was the most incredible specimen, standing guard at the museum inside a glass box.

The gift shop offers Inuit art, jewelry, and scholarly, historic and children’s books. I bought a charming child’s book titled “The Polar Bear Son,” by Lydia Dabcovich, about an Inuit woman raising an orphaned polar bear cub. Village children play with friendly, fluffy “Kunikdjuaq,” who grows up beloved by all.

This helpful bear even hunts and fishes for his human mother. When the adult villagers decide the grown bear is too dangerous and must be killed, his alarmed mother sends him away. Days later, she calls his name, and the bear returns, bringing salmon and seal. Kunikdjuaq and his human mom live happily ever after. A romantic notion, of course.

“One day I’m walking along Hudson Bay’s shoreline,” Mike said. “A huge polar bear rises up from a rock behind me. I grab my gun and turn to face him. Six feet from my face, I’m terrified, yet thrilled. I’m prepared to shoot him if I have to. I don’t want to. After what feels like forever, he snorts in my face, then lumbers away. What a relief. Then I check my gun: it was jammed. That bear easily could have killed me with one paw swipe. Why didn’t he? I’ll never know.”

It was time for our own polar bear encounters. 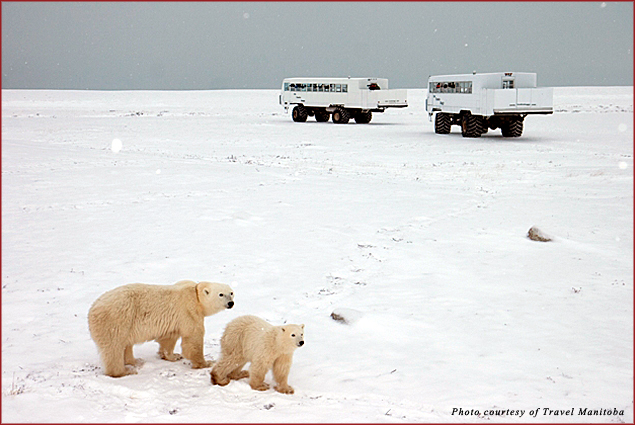 BEARS OUT MY WINDOW
The next morning, 25-degree temperatures demanded that I layer on long underwear, wool pants, sweaters, fleece vest, snow parka, hat, and gloves. Our group climbed aboard a polar rover emblazoned with “Great White Bear Tours.” Our Churchill Nature Tour guide Patrick Rousseau gave us safety tips on meeting the “Lords of the Arctic.”

“Polar bears are super-aggressive,” Patrick warned. “Males can weigh 1,320 pounds and stand 10 feet tall. If you want to return home with your hands and head, I suggest you keep them inside the bus windows.” We laugh, but he was serious. No one has ever been hurt, and Patrick’s diligence and experience are why.

Patrick has led Churchill Nature Tours for 16 years, and his impressive resume includes 34 years as a Wildlife Biologist for the Canadian National Park Service. His specialties include resource management of black bears, beaver, bison, hydrology, and Arctic Ecology. He also has a gentle sense of humor and eagle eyes, and constantly scans the horizon for bears, foxes, and owls.

Driver Bill McPherson fired up the engine and the heat, and we hunkered into plush seats. We wondered how many polar bears we would see that day.

The boreal forest of black spruce, jack pine, and poplar trees gave way to windswept trees and brownish willows against a gunmetal sky. We roller-coastered along unmarked tundra trails, in and out of muddy potholes, and through icy ponds. Every snow-covered rock seemed to be a sleeping polar bear. Huge bear paw prints meandered into the distance. Thank God we weren’t hiking this desolate tundra world. 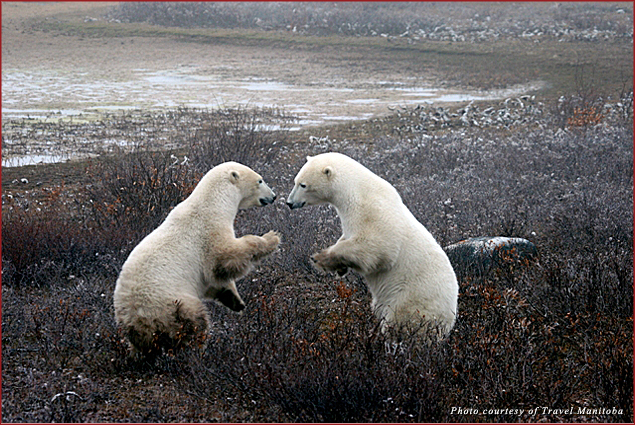 “Are they fighting?” I asked. “They’re exercising,” he replied, “getting in shape for a long winter of hunting seals on the ice. If they don’t build up their stamina, they can’t hunt, and they’d starve to death. This behavior is critical for their survival.”

Patrick shared more polar bear facts. “Their paws are the size of a dinner plate and their heads are 14 to 16 inches wide. They can unhinge their powerful teeth and crack a seal’s skull with one crunch. Their claws can haul a 200-pound seal from the water. And they can pick up a scent from 20 miles away. That’s why they come so close, smelling our lunch. And us.”

A mother bear appeared with her adorable cubs in tow. She stopped and sniffed the air as a strange male bear walked along the horizon. As he approached her family, she froze, staring intently as if to say, “Stay far from my kids or you’ll be forever sorry.” He veered away without challenging her.

Safely inside our polar rover, we took incredible photos from the open windows and the back deck. Polar bears stood under the grate, smelling our feet.

“Don’t stick your hands through the grate if you enjoy having 10 fingers,” Patrick warned.

During two exhilarating days, we were guests at a very special polar bear party. More than three dozen bears made an appearance. Some jawed each other, others snoozed in the willows. One looked like a giant stuffed toy, on his back, huge paws in the air.

My first polar bear sighting was at age eight. A large male paced inside a tiny concrete cubicle at the Washington National Zoo. I felt sorry that his life was limited to floating in a tiny pool, eating, sleeping, and entertaining us kids. Now I understand he was a rescued orphan cub, and his life at the zoo was infinitely better than being defenseless and starving in the wild.

So here I was in Churchill 50 years later, thrilled that a massive hungry polar bear was right outside my window. I couldn’t hug him, or pet his ivory fur. Yet I couldn’t give up my girlish infatuation either. I stuck my vulnerable head out the bus window and blurted “I love you with all my heart.”

But this ferocious Lord of the Arctic was hungry. Sniffing my warm flesh, his expression said, “I could care less. Why don’t you give me your head? For a snack.”

Rejected, I sulked into my bus seat as Patrick sauntered down the aisle. “So, Sharon, now you’ve got a hot date with a polar bear?” he grinned.

“Sharon, you know what’s so great about this place?” our driver Bill asked. “Every fall in Churchill we get to watch these incredible bears get ready for winter. In December, when Hudson Bay ices over, we watch their bums waddling north onto the ice. With a big bear smile on the other end.”

Now that was my idea of a happy ending.

More info at Everything Churchill.