Polanco Food Tour: Street Food for the Rich and Famous—and You 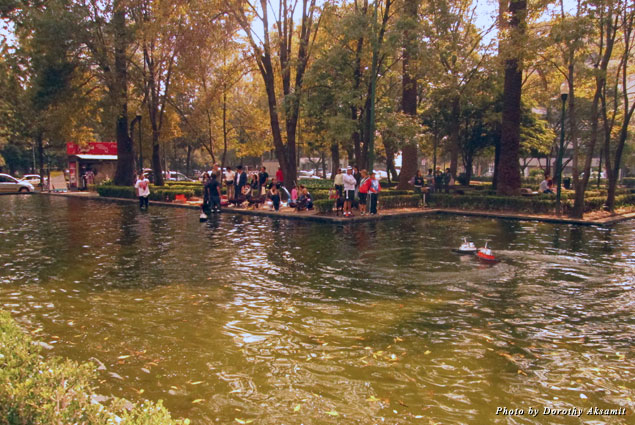 Toto, this sure isn’t Kansas, but is it Mexico City? The broad, leafy boulevards are not paved with gold, but they are lined with embassies, starry hotels, and Brioni, Bulgari, and Burberry. The architecture is high-rise interspersed with California Mission, and the street names bordering a park with lakes, a theatre, bike paths, and an aviary give no clue: Ibsen, Poe, Tennyson, Jules Vern, and Dumas. 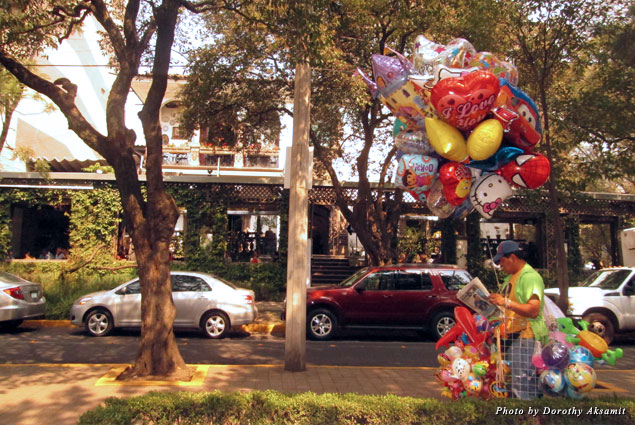 In my conquest of Mexico, I conquer a neighborhood by taking a walking tour so I was delighted to find a food tour in one of the most posh neighborhoods in Mexico City. I was traveling alone and had signed up for the Polanco Mexican Food Tour for Sunday morning. 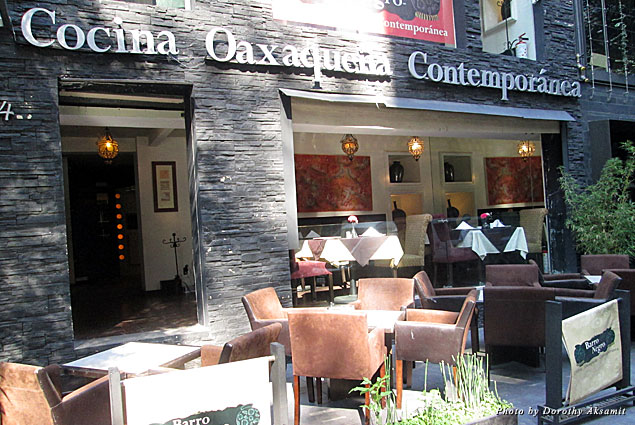 The tour was to start at Barro Negro, a charming two-story Oaxacan restaurant in a residential area. I arrived early along with the Sunday morning brunch crowd, which was casually dressed with the women in jeans and skyscraper heels and the men in sports attire. Barro Negro’s minimal decorations include contemporary paintings and the distinctive black ceramics made from clay found only in Oaxaca. 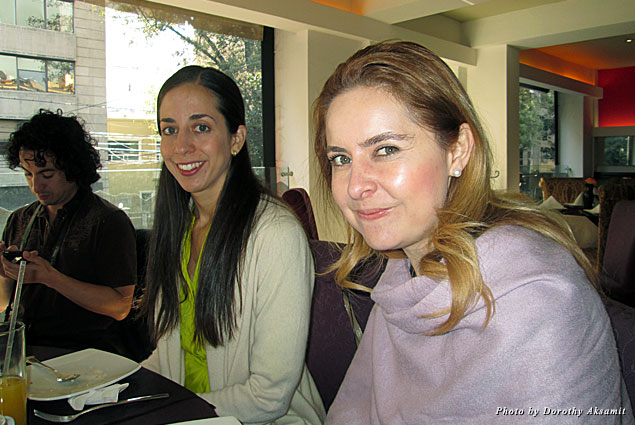 Connie and Jimenez, co-owners of Mexican Food Tours, met 12 of us in the dining room where we learned Mexican Food Tours grew from the owners’ dream of introducing tourists to some of the most popular Mexican street foods in a hygienic, hassle-free setting. They took a course at the Chicago Food Tour Pros School, and 12 tourists were now sharing their dream. Connie was to be our guide, and you couldn’t have asked for more enthusiasm. 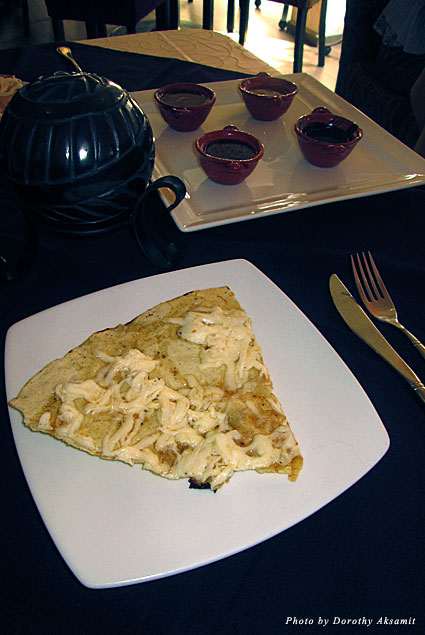 At Barro Negro we were served thin, crispy tlayudas, a favorite street food of Oaxaca. Think flatbread or Mexican pizza as tlayudas can have a variety of toppings. Ours came with thin ribbons of cheese and were served with four moles. Connie explained most moles contain at least 18 ingredients, including chilies, nuts, seeds, spices, and chocolate. The four moles we sampled ranged from mild to hot. All 12 of us were unanimous in our favorite: the dark chocolate one. 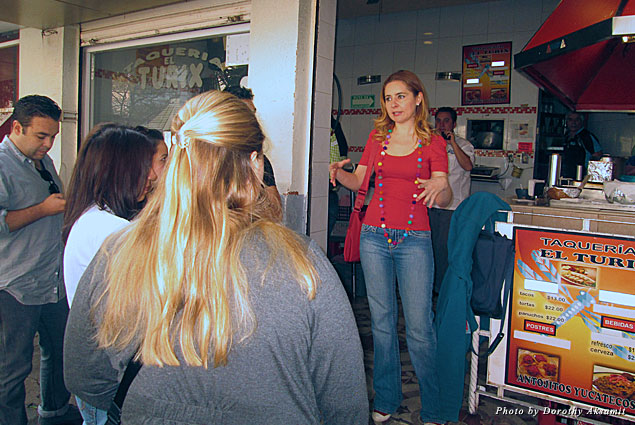 A block away in a simple taqueria, El Turix has what Connie thinks might be the best pulled pork tacos in Mexico City. Cochinita pibil is a traditional, slow-cooked pork recipe from the Yucatán. It includes achiote (annatto), chilies, and orange juice, preferably from Valencia oranges. It was too crowded for all of us inside so we stood around blissfully ignoring the mess we were making with the finger lickin’-good pork taco. 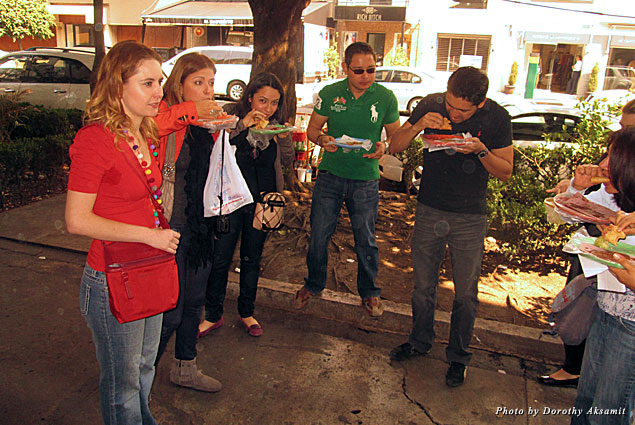 The remainder of our tour was along the leafy borders of Lincoln Park. It was a rather magical sunny morning where toy sailboats raced around a shallow lake, a group of musicians warmed up for a performance, families (sans nannies) strolled along with ice cream cones, and the only street vendor was selling balloons. I made a note to return to have a peek inside an aviary we didn’t have time to visit. 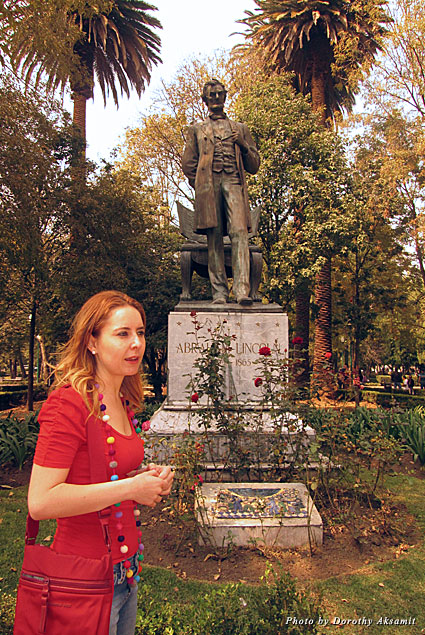 We paused at a statue, which shouldn’t have been a surprise because we were in Lincoln Park, but still I was surprised to see a statue of Abraham Lincoln. And if that weren’t startling enough, across the street stood Martin Luther King. Both statues, Connie said, were donated by the United States. 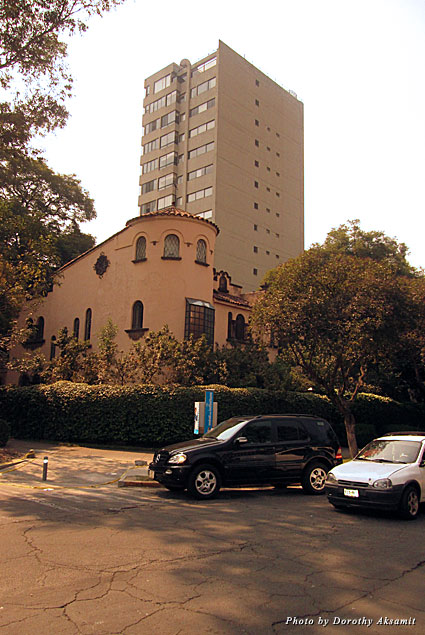 She pointed out much of the architecture was 1930s Mission Revival influenced by Hollywood. Polanco was developed in the 1920s and ’30s, when it became home to Lebanese, Jewish, German, Spanish, and Russian immigrants. Many of their mansions now house restaurants and shops. Polanco’s cosmopolitan neighborhoods are dotted with non-governmental organizations, upscale boutiques, and embassies, including the new American Embassy. 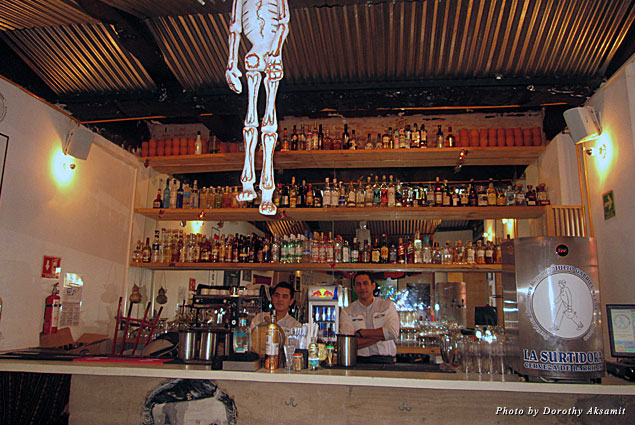 Our next stop, La Surtidora, is a riff on a small town cantina. Pork and nopal (cactus leave) tostadas were washed down with pulque. Pulque, made from the fermented sap of a 10-year-old agave, is usually too yeasty for me, but this one, flavored with oats with a dash of cinnamon, was quite refreshing. Besides a well-stocked bar and interesting menu, including tostadas with huitlacoche (corn fungus), another claim to fame is Surtidora’s hidden door to a subterranean cantina entered, by those in the know, through a fridge door. 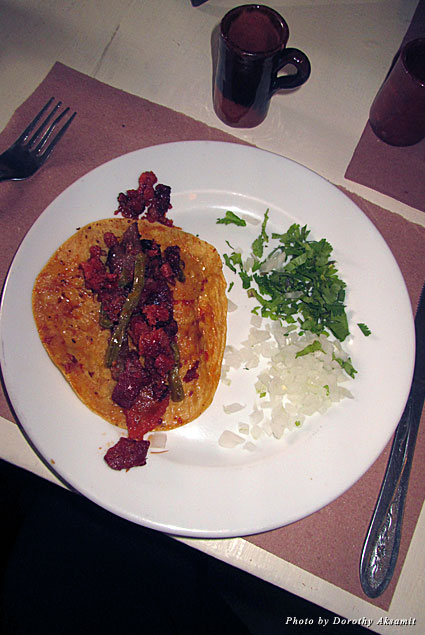 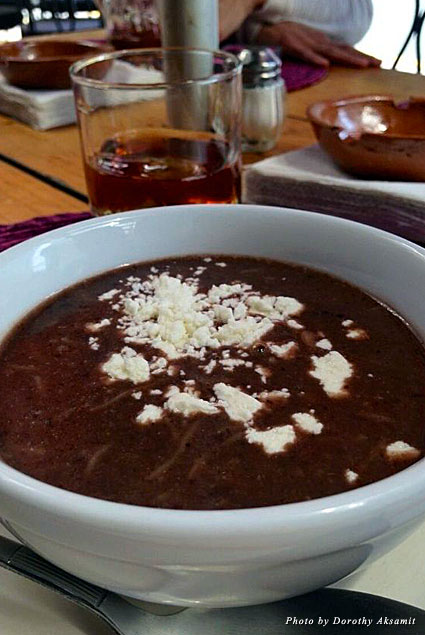 It was under the shadow of the Intercon and the Hyatt hotels we grabbed a street side table at Karisma Cantina to sample a tortilla soup with goat cheese. This humble bean soup is one of my benchmarks for judging a restaurant, and I made a note to come back for more and to try their famous margaritas. 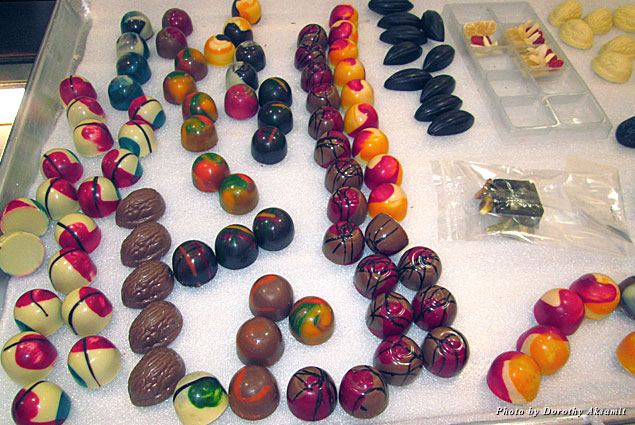 Connie was enthusiastic about Mexican chocolate, considered “Food of the Gods” by the Aztecs when it was reserved for nobles. At Que Bo! we found a modest candy shop showcasing the chocolate gems of the internationally acclaimed chef Jose Ramon Castillo, who studied in France and Spain and has won many international awards. He returned to Mexico, where he crafts chocolate using only Mexican chocolate and no refined sugar or dairy products. From our four samples the group favorite was café olla, a coffee-flavored, melt-in-your-mouth chocolate. Truly a food of the gods, it was even more heavenly paired with Casa Dragone tequila. 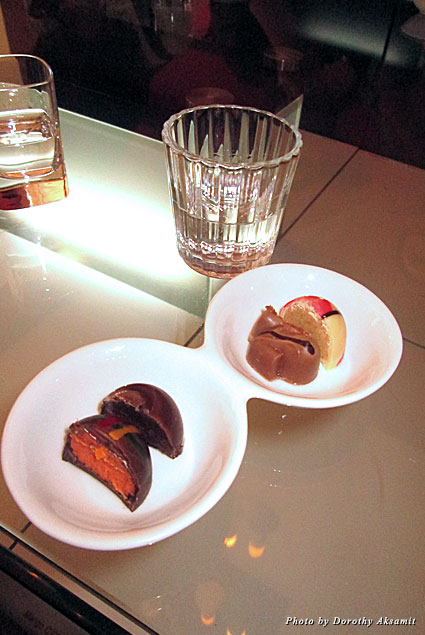 A fitting finale was a stop at a popular ice cream shop called Neveria Roxy, where we had a choice of rainbow-colored ice creams flavored with exotic fruits. Our favorites were passion fruit, lemon, and mamey.

The tour had lasted two and a half hours, but we weren’t ready for it to be over. Some of us exchanged email addresses while getting last-minute tips from Connie. She told us we were within walking distance of the Archaeological Museum, a great place to walk off our foodie tour and then come back to our favorite restaurants. We were given a map and some store coupons as further enticement to return. It was a perfect tour for a solo tourist on a Sunday morning.

Toto, Polanco isn’t Kansas, but my GPS says it sure is Mexico City.

Two Museums Linked by Diego Rivera Busing From Mexico City to Malinalco: The Good, the Bad, and the Beautiful