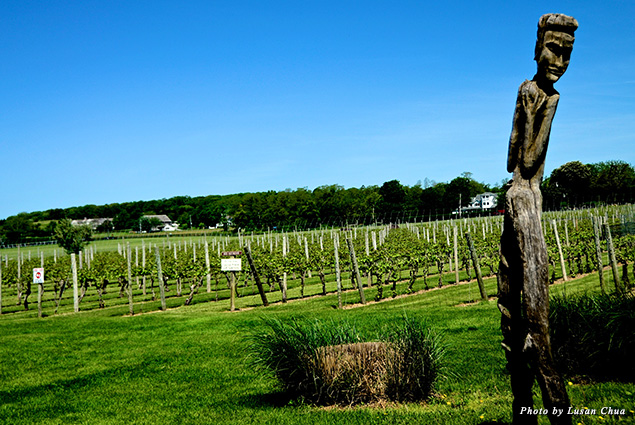 When choosing a term to encapsulate Channing Daughters, the word that comes to mind is “passion.” What happens when a venture capitalist, a viticulturist, a French Culinary Institute-graduate-turned-sommelier, and a nonprofit theater manager contribute their collective talents to a winery partnership? An authentic, creative approach to winemaking is the inevitable result. The sparklingly sincere Allison Dubin, winery manager, explains Channing Daughters is a magical place that seems to draw people with a true dedication to the craft of winemaking. For these reasons, a visit to the 26-acre vineyard in Bridgehampton, New York, is an immersive experience in artisanal winemaking at its very finest. 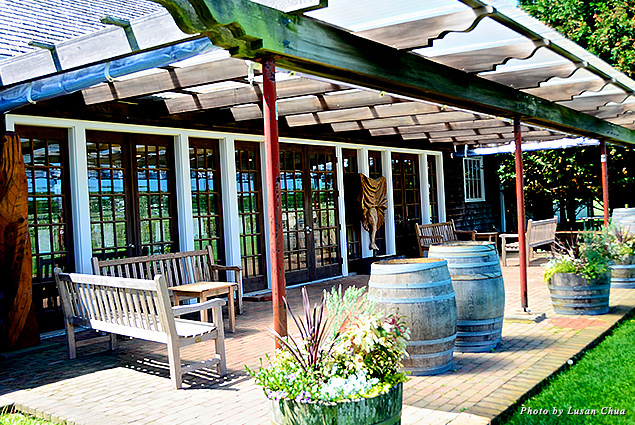 When you’ve reached the end of the winding verdant country road that leads to the Channing Daughters estate, a cuddly Labradoodle named Remy will greet you on the front porch. Anthony, the tasting room manager, will welcome you with a warm smile at the tasting room door. After working on Wall Street, Anthony transformed his love of vinoculture into his current gig. His genuine enthusiasm and affable demeanor create a casual and fun atmosphere, with no question too miniscule and no request unanswered. 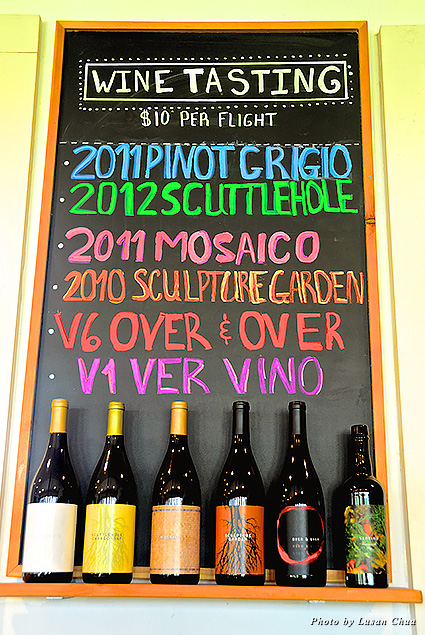 Channing Daughters currently produces approximately 7,000 cases of wine a year across 26 bottlings. The production represents an exciting diversity of varietals, including Chardonnay, Pinot Grigio, Tocai Friulano, Sauvignon Blanc, Muscat Ottonel, Malvasia, Gewurztraminer, Pinot Bianco, Merlot, Blaufrankisch, Pinot Noir, Dornfelder, Cabernet Franc, and Cabernet Sauvignon. This range of varietals provides a broad palette for winemaker Christopher Tracy to apply his handcrafted approach to winemaking, which Allison describes as “spontaneous, creative, intuitive” and uniquely attuned to harvest conditions for that particular season. The winery team compares naming a favorite release to “choosing a favorite child,” although the most unique offerings at Channing Daughters might be found amongst the rosatos, the “orange” wines, and the vermouths—all three varietals are on the “must” list for your tasting room experience. 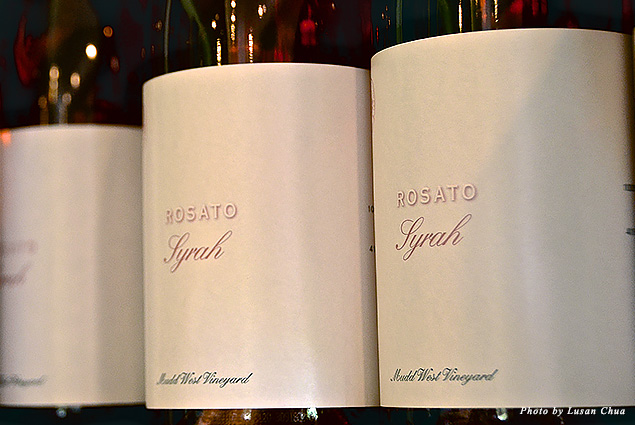 First item on your tasting menu: one of the delectable current release rosatos. Anthony explains Channing Daughters labels this varietal as “rosato” (rather than “rosé”) as a nod to Friuli, a wine-growing region in the northeast of Italy that has a similar maritime climate to the Hamptons. Your favorite might be the Rosato di Sculpture, a field blend that is crisp, complex, and reflective of the vin de terroir. Another crowd pleaser is the Rosato di Merlot—100% its eponymous grape—which has a beautiful raspberry finish. And in case you’re looking for a sip of summer off-season, Allison assures, “Rosé to me has become a year-round drink.” 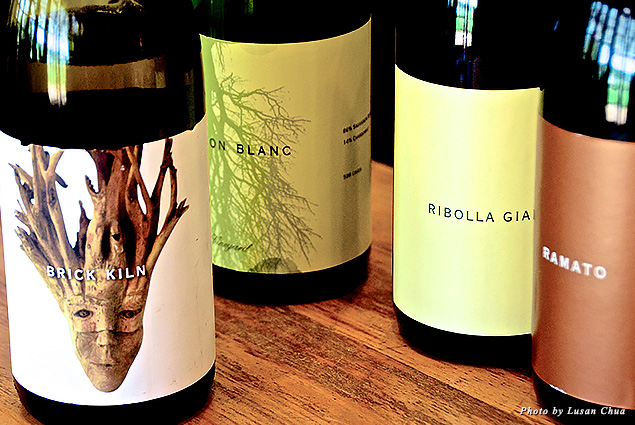 Channing Daughters is also renown for its skin-fermented white wine, sometimes referred to as “orange” wine due to the coppery hue the white wine receives from contact with the coloring pigments of the grape skins. This lesser-known varietal is celebrated by Channing Daughters, which became the first on the East Coast to offer this wine in 2004, a style made renown in northeast Italy. Take a moment to admire the wine bottle labels lovingly designed by the winemaker himself, some of which feature Walter Channing’s sculptures. Then savor the romato, made from skin-fermented Pinot Grigio grapes and aged in a mixture of Slovanian and French oak. It’s nutty, clove, and spicey, with a pear and peach burst of flavor on the finish. Consider serving this romato like chef Michael Anthony at New York’s Gramercy Tavern, with squash risotto Allison describes as a “heavenly” pairing. 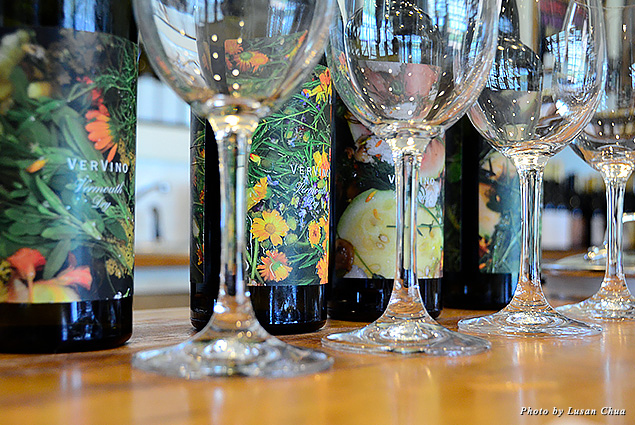 The fitting finale to your tasting experience at Channing Daughters is the delectable line of vermouths—fortified wines made with local botanicals and herbs. Vermouth is the Channing Daughters pièce de resistance; sampling this year’s lineup is like tasting the seasons in Bridgehampton. The exact botanicals (roots, barks, flowers, seeds, herbs, spices) used by Christopher is a closely guarded secret, although the winemaker has included photographic clues on his vermouth labels—including fennel and basil, peppers and spice, arugula and beets, melon and shitake mushroom, and chives. In the summer, pair the arugula and beets vermouth with a fresh-squeezed watermelon juice for a summer party crowd-pleaser. For a wintery delight, mix a fennel-and-basil-infused vermouth on the rocks. Allison notes Roberta’s in Brooklyn serves a cocktail featuring the Channing Daughters vermouth that is “mindboggling.” 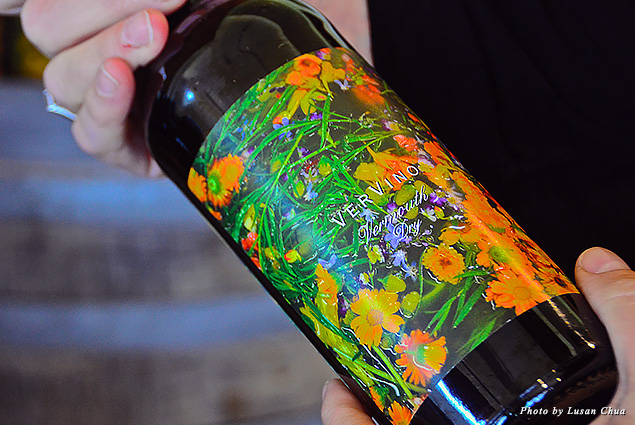 The wine-making team at Channing Daughters exudes a love of the local terroir that shows not only in the passion poured into making the wine itself but also extends to the dedication and detail put into maintaining the beauty of the winery estate and the true commitment to supporting the Long Island community. Strolling around the winery grounds, you can admire sculptures fashioned from reclaimed wood by Walter Channing, the financial genius behind Channing Daughters, who is affectionately nicknamed by Allison as the “Wizard of the Forest.” Channing created the Channing Daughters’ logo, an inverted tree, after he found an upended tree left in the wake of Hurricane Gloria. The winery is named after Walter Channing’s four daughters, one of whom helped found a yoga studio, where local yogis practice in an open air tent amidst the vines. 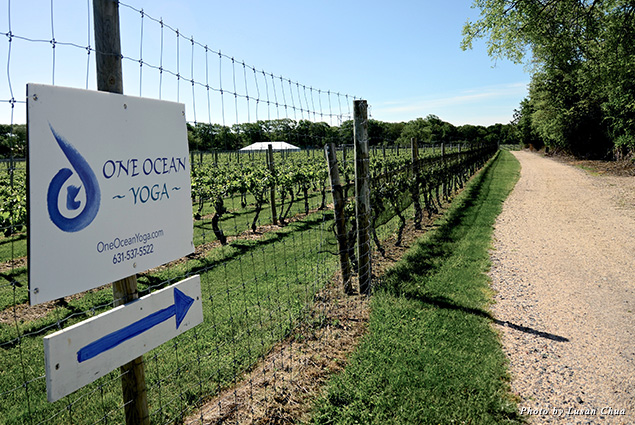 Perhaps it’s this pride in the community that drives Channing Daughters—a self-proclaimed “vineyard with a purpose”—to have an unflagging commitment to quality. Allison says unequivocally, “If a wine is good, an audience comes for it. If we don’t feel a wine is good, we don’t release it.” It’s the take-it-or-leave-it mentality that has made Channing Daughters a darling of the New York wine scene distributed at an impressive list of restaurants in the city, such as the foodie-meccas Blue Hill and Megu Midtown.

Channing Daughters has made a deliberate decision not to market itself beyond the New York area, although organically the winery has grown a much wider following; its wines are currently distributed in 10 states and seven countries. When asked about the unifying qualities that attract distributors to Channing Daughters, Allison cites being “small, quality, artisanal … interesting, and off the beaten track.” It’s these qualities that make Channing Daughters like a beautiful, small town girl who doesn’t need to be belle of the ball in order to show and know her own worth.

The Hamptons: A Winter Wonderland