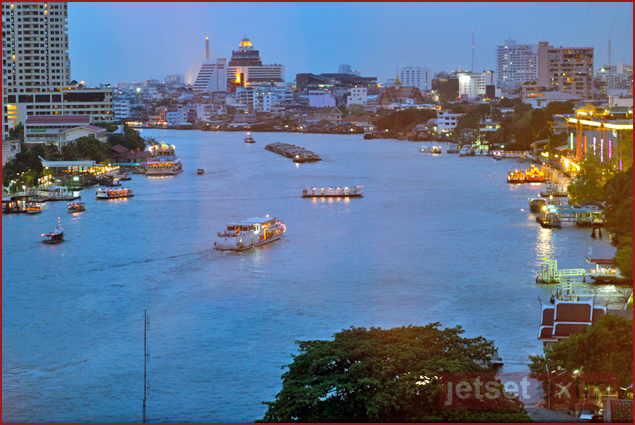 Still sleepy from the previous day, Jason and I awoke to an incredible view out of our 10th floor window at Bangkok’s Mandarin Oriental hotel. From directly over the river, we watched as the different watercraft cruised, floated, or roared up and down the Chao Phraya river. We then met up with Maxine downstairs at Lord Jim’s for a quick breakfast and coffee before the day’s adventures began. 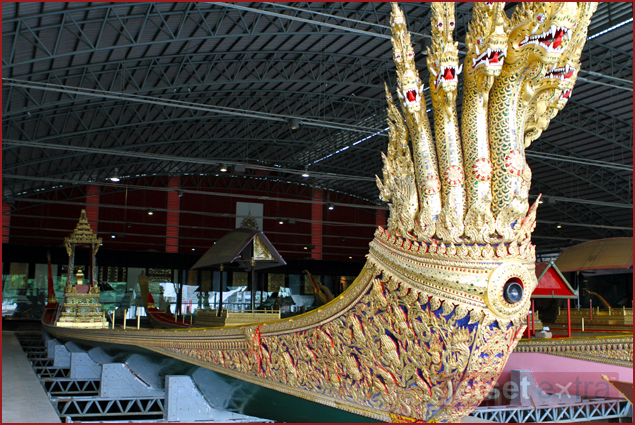 Registration for the annual Thailand Travel Mart (TTM) event wouldn’t take place until later that afternoon, so we did some sightseeing around Bangkok before heading to the convention center. Fellow TTM attendee Tipi joined the three of us on a long-tail boat (named as such for their long drive shafts) and took a ride up the river to visit the Royal Barge National Museum.

This museum is not something most people think to stop and visit, but it was quite impressive and so easy to get to. It’s right off the river and about a 15 minute ride from the Mandarin Oriental. Once used during wartime battles on the water, these massive barges are now solely used during parades and holidays. In the back of the museum, we found information about the different eras and types of barges used from generation to generation. There were even ruins of old royal barges that have been preserved. The intricate details carved into these barges is a testament to the care and skill of the craftsmen who built them. 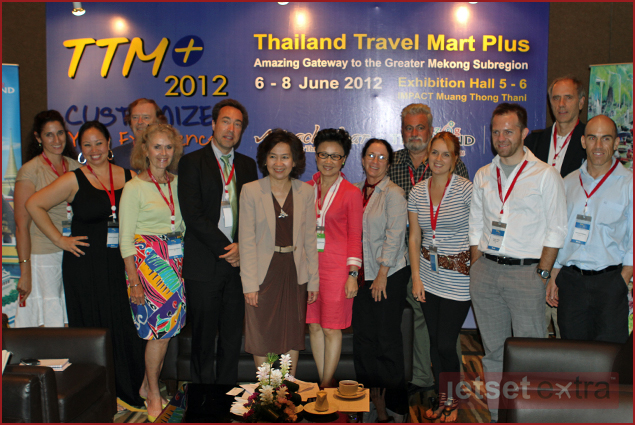 Once the sightseeing ended, we were on our way to get registered for the TTM event and meet the deputy director of tourism.

The next morning, we were up early to pack up our bags and gear and head out on our flight to Phuket. The flight to Phuket from Bangkok is a short one. We landed and headed straight to lunch at the Andara Resort. If you are on an extended holiday, this is a great property to consider. Andara is not a typical resort; it is made up of a group of villas that range from 2 to 6 bedrooms, and it can easily serve as your home away from home with all of the same perks of staying in a hotel. 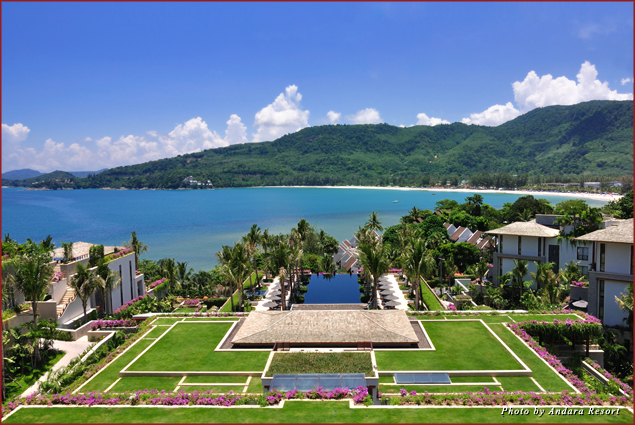 After lunch, we headed to where we would be staying for the next two nights: Paresa Resort. With a name that means “heaven of all heavens,” this place is truly magical. Our room was pretty spectacular–we had our own private pool, an outdoor bathroom, and a gorgeous cliff-side ocean view with warm trade winds breezing by. Really, it wasn’t going to get much better. 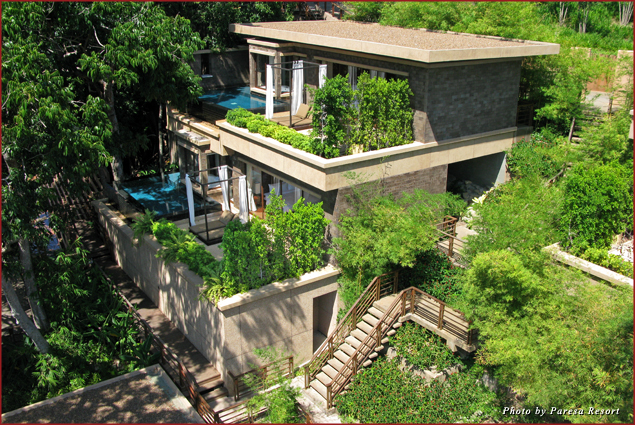 As Jason and I wandered the property to take photos, it felt like we were in a giant treehouse. The property is built into the jungle on the side of a mountain overlooking the ocean. There are birds and monkeys living amongst the trees. We were warned to not keep food or personal items outside, as the monkeys like to visit at night and will steal, eat, or destroy anything left out. At dinnertime, we met up with Maxine at the restaurant where we were served a prix fixe menu of surf and turf. The meal was divine, and the company even better. There is nothing like sharing a great meal with wonderful people.

Adventure day! Sea kayaking was on the agenda with a company called Sea Canoe in Phang Nga Bay. (I wrote about this adventure in a previous article; it was fun, scary, exciting, and funny all at the same time!) We began by joining 9 or 10 others aboard a large boat that sped off toward a small island that was to serve as our kayaks’ launching site. With so many tiny islands scattered throughout the bay, I never knew which would become our destination. 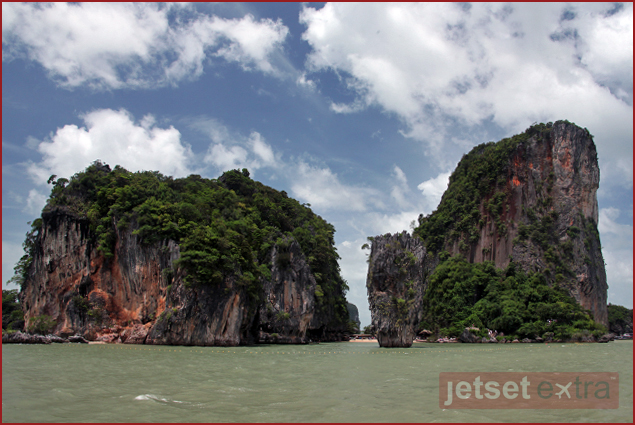 The two kayaking excursions we went on were considerably different in tone. The first of the two was easy and calm as our guide wove through the picturesque stalactites that dotted the ceilings of these coastal caves. The second, however, proved much more challenging. Squeezing through impossibly narrow passageways nearly sent me into a claustrophobia-induced panic. Then, when we realized the water was only 5’ deep, we abandoned our cumbersome rubber kayaks and swam through without a problem! Maxine almost didn’t make it through, but with a bit of encouragement from her guide, she emerged into the lagoon in her kayak unscathed.

Between the two trips, we went to lunch in a floating village on Panyee Island. This quaint old village stands on concrete or wooden stilts in the water right next to the island. The people were very nice, and the lunch they served was fried fish, curry, soup, and–believe it or not–french fries. This all made for a great day out, and we were wiped out when we returned to our hotel. 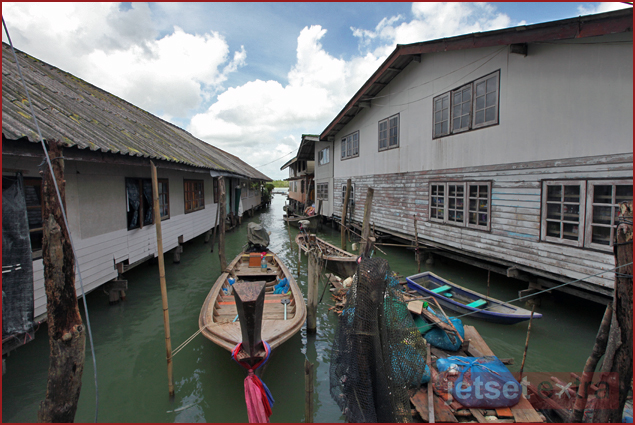 Our day in Khao Lak started with a bus ride from the Paresa Resort to The Sarojin, a resort we had been hearing about our entire trip. Everyone we met asked if we would be staying at this property, but we had no idea what a treat they had in store for us. 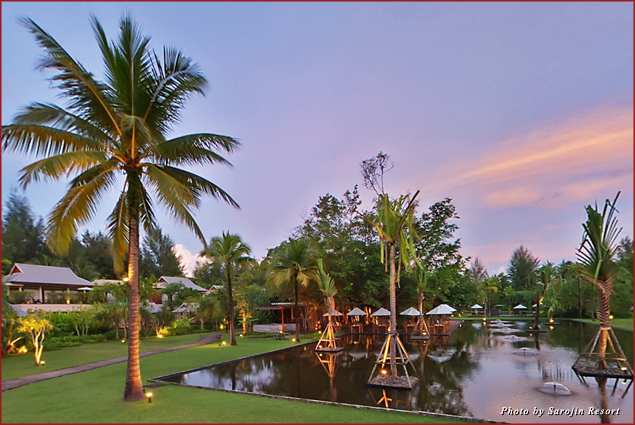 The day had been threatening us with rain, and the growing humidity mixed with the heat was melting us when we arrived at The Sarojin. The staff must have noticed, because when we arrived, they had the loveliest glasses of Thai iced tea with orchids and bendy straws waiting for us. I don’t know if it was the heat, but that was the best glass of tea I had ever drunk (and I’ve gotta say, I love a good bendy straw in my drink). 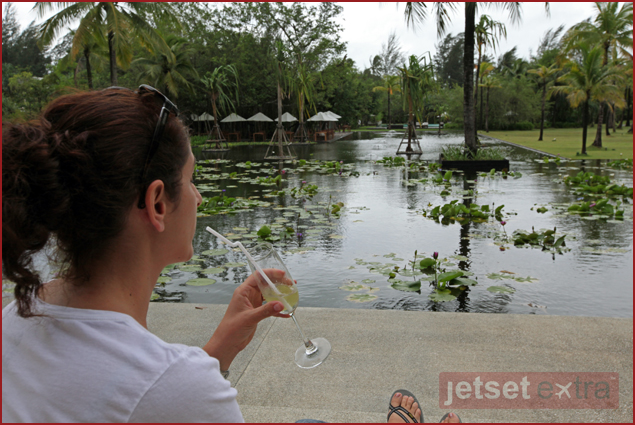 After we checked in, we changed our clothes and headed to The Sarojin’s 11km white sand beach, where we found hundreds of hermit crabs and decided to race them–childish fun, but it was just what we needed after riding in the car all day. 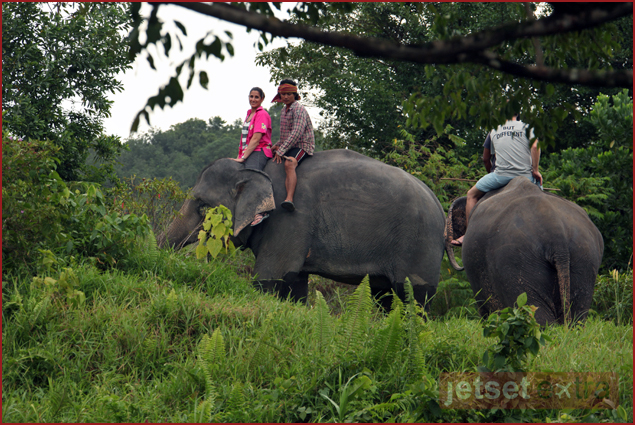 The most exciting part of our day was about to happen; we were going to ride elephants! The Sarojin runs its own elephant camp and offers guided excursions to their guests. The camp is run by guides known as mahouts, and each elephant is paired with its mahout for life to be trained and cared for. You can choose to ride through the jungle like Jason, Maxine, and I did, or you can opt for a trip to a nearby waterfall for a romantic candlelit dinner–the rest is up to you!

Read more about The Sarojin here

Later in the evening, we met up with The Sarojin’s “imagineer,” Dawid Koegelenberg. Dawid invited Maxine, Jason, and me to a wine tasting. “Wine tasting in Thailand?” you ask. Yes, believe it or not, we had fabulous wine tasting experiences throughout our stay. The Sarojin has a very cool wine tasting room that Dawid oversees. When you go, you have to ask Dawid about his history and what brought him to The Sarojin; he has a very interesting resumé! He challenged us to tell him what type of wine we were drinking and where it was from. I won! I guessed a Cabernet Sauvignon from Chile.

We moved on to dinner after our very fun and informative wine tasting. The Sarojin has a great restaurant right on the beach with live entertainment. We had such a fun evening sampling each kind of food offered and watching the Thai musicians and dancers.