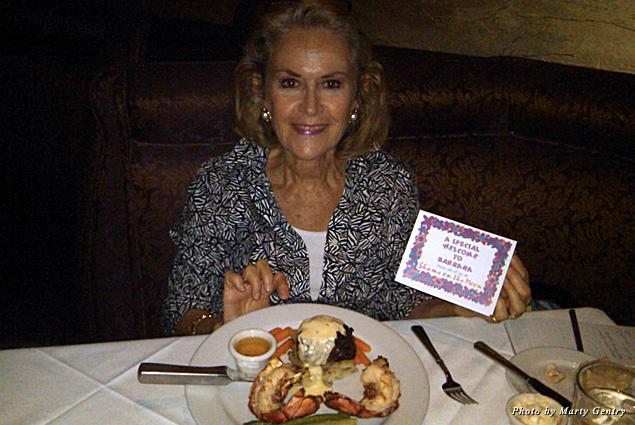 This was my reaction last week after I took advantage of Palm Springs Desert Resorts Restaurant Week—running now through June 16—and tried some restaurants I’d never been to before. As a desert resident (I have a home in LA and in Palm Springs), I thought I knew all the best ones. Wrong!

Inspired by the discounted prix fixe meals, I visited three restaurants I’d heard about from locals but never experienced. Wow, what an eye opener. Each was amazing: delicious cuisine and wonderful ambiance. I’ll definitely return to each one. That’s the beauty of Palm Springs Desert Resorts Restaurant Week; it’s a great opportunity to try new restaurants without breaking the bank. Prix fixe, three-course rates are $26 or $38. A steal when you consider many of the desert’s top restaurants are on the list, including Wally’s Desert Turtle, the finest and priciest restaurant in all the Coachella Valley. (And it’s not only restaurant deals. In between meals, I self-indulged in a blissful “Palm Springs Glow” facial at the Feel Good Spa at the Ace Hotel Palm Springs as part of the Restaurant Week fun.)

With Restaurant Week continuing through June 16, I highly recommend these local favorites. 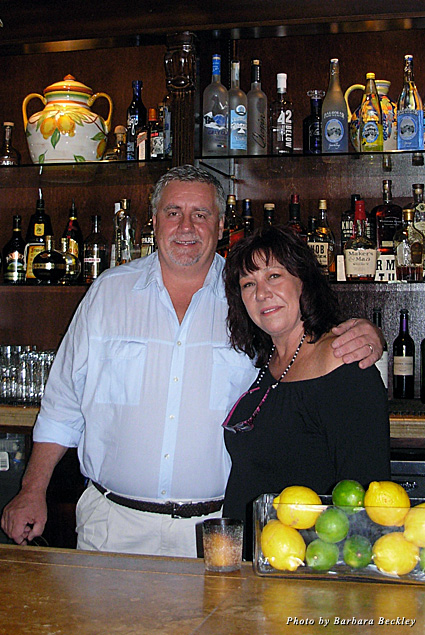 It took two weeks to get in the first season this fine dining bistro opened in Cathedral City, co-owner Bonnie Barkley told me as I sat down to lunch. No surprise after I sampled the fare. The Restaurant Week menu offers a wide range of starters and main courses as well as two choices for dessert. The home-style tomato soup was wonderful: thick, hearty, and zesty. Bon Appetite magazine recently called and asked for the recipe, Bonnie said. The bread was crusty and light, flown in from New Jersey (it’s parbaked and finished in Cello’s ovens), and the pesto topping was so delicious I would have licked the bowl if I’d been alone.

Next, I chose the signature dish: chicken Caprese. It was also super tasty, with lightly pounded and breaded chicken breast topped with fresh half-sliced tiny red and yellow tomatoes, mozzarella, and shredded basil. Co-owner Thomas Steferak explained he had the same dish years ago in Florence—way before he and Bonnie had the restaurant—and he loved it so much he took a picture of it, before it was fashionable to photograph food. Once they opened the restaurant, he recreated it for all to enjoy. For dessert, I ordered the limoncello sorbet. Again, this was no ordinary sorbet. It had a thick, creamy texture and was topped with lemon zest. Did I mention the crisp Pinot grisio? It was a perfect match for everything.

Tom and Bonnie both came from the corporate world so when they opened Cello’s four years ago they wanted it to be fun, something similar to the dinner parties Bonnie would throw for up to 85 guests, which inspired the restaurant in the first place. Martini glass-style lights and golden flatware—“I love gold flatware because it sparkles at night,” Bonnie enthused—add a chic whimsy to the upscale ambiance. “We’re not an Italian restaurant. We’re an American bistro. We serve everything,” she clarified. The name, Cello’s, originated with Tom’s nickname, “Tommy Cello,” and his local fame for making limoncello from scratch. The original space is now the bistro, a cozy bar area where you don’t need reservations and everything on the menu is less than $10. The adjacent dining room requires reservations; it includes an eight-person Chef’s Table, which serves custom, seven-course meals.

Cello’s recently opened for lunch Monday through Friday. Dinner is served nightly. Plans are underway to add a food boutique featuring the New Jersey bread, pesto spread, and other gourmet delights. Cello’s also offers cooking classes, bourbon tastings, and other special events. “We like to spoil our customers,” Bonnie said, “so we don’t publicize our events. The only way to learn about them is through our emails.” How does one get on the list? “Just go to our website and sign up,” she smiled. 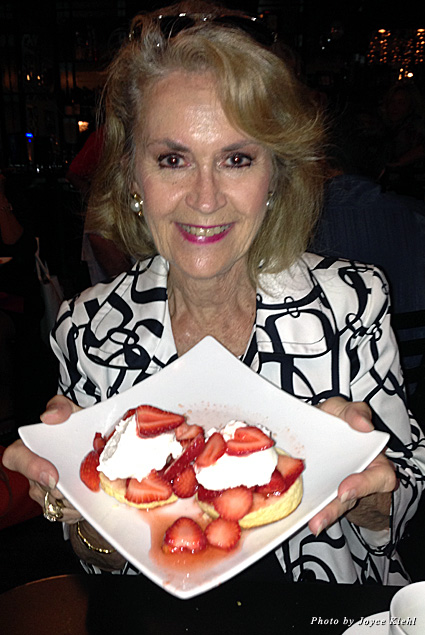 Fine dining and fun usually don’t mix. But at Shame on the Moon in Rancho Mirage the ambiance is as friendly as the food is delicious. That’s why it’s been a local favorite for 29 years and won countless awards for outstanding specialty restaurant and outstanding customer service.

As I entered, mirrored walls and upholstered booths welcomed me to old school elegance. Ginger Carter, the manager, who’s been there for 23 years, welcomed me with open arms—literally. “It’s an honor to have you,” she enthused, giving me a big hug. Well, I am a journalist and she did know I was coming. No … she hugged everyone. And she knew the customers by name, chatting with them like old friends. The bartender was just as jovial with the well-dressed regulars at the bar. “I haven’t seen you two for awhile,” he said, as two country club-style women sat down at the bar. Without asking, he poured their favorite cocktails.

Marty Gentry, my server, was equally fun and friendly, guiding me through the ample choices on the Restaurant Week four-course menu. He’s been there for 19 years. “Soup automatically comes with the entree, so we actually give you four courses,” he explained. For wine, Marty recommended one of his favorites, an oaky Sonoma-Cutrer Russian River Chardonnay. “If you don’t like it I’ll drink it, and you can order something else,” he teased. I loved it. Potato pancakes with smoked salmon, truffle crème fraîche, and caviar was my appetizer choice. Delicious! There was nothing pancake-like about it—more the consistency of twice-baked-potato fillings wrapped in salmon and smothered in crème fraîche and black caviar.

I chose as my soup the house specialty: chicken and roasted corn chowder with vegetables. Thick, creamy, with huge slabs of tender chicken, it was excellent. The entrée choices were amazing, considering the special prix fixe price. Surf ’n’ turf and the Australian lamb chops were my favorites of the five offerings. I went old school with the surf ’n’ turf. It was as heavenly as expected, with two small lobster tails with drawn butter, tender filet mignon with béarnaise sauce, finely scalloped potatoes, and fresh asparagus and baby carrots. Marty suggested the upside-down apple cake with caramel sauce and vanilla ice cream for dessert. It was perfect. Not too big with a large scoop of ice cream and succulent apple slices inside the crumbly cake.

Sometime during dinner, Ginger delivered a colorful card printed with “A Special Welcome to Barbara from all of us at Shame on the Moon.”

“No. It’s not because you’re a journalist,” she said. “We love newbies and we love our regulars. We make cards for first-timers, birthday parties, long-time customers,” Ginger explained. She also gave me the lyrics to the restaurant’s namesake song, “Shame on the Moon.” Originally written in 1923, it was re-released in 1982 by Bob Seger and Rodney Crowell. “You’d know it if you heard it,” she said. I watched as groups of friends and couples met, mingled, and laughed over dinner. You have a choice of the main dining room or the light and airy yet still elegant air-conditioned enclosed patio that wraps around the building behind lush green hedges.

When I left, there were more hugs and Ginger introduced me to the bartender. A young woman at the bar shook my hand. “My husband’s out of town, and I feel fine coming here alone. Please, do come back,” she said. Shame on the Moon is open nightly for dinner. Reservations are recommended. 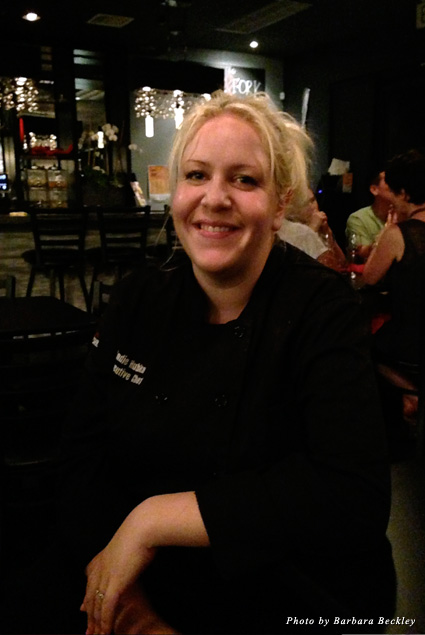 Dining in the desert is more than satisfying one’s appetite. It’s a major recreation—and a hot topic of conversation. So when the new Cork & Fork Wine Bar in La Quinta opened in January, word quickly spread that its food was amazing. I arrived at 5:30 p.m. on a Wednesday and the sleek contemporary space was already packed. Andie Hubka, the young chef-owner, told me she serves “small plates, to mix, match, share, and enjoy.” But the tasty cuisine a friend and I shared seemed totally full-sized and filling. While Andie is classically trained, she said she “just wants to have fun. There are no rules, only that the food must taste good. I change the menu frequently.”

The menu is so creative I had trouble choosing from the four appetizers, four entrées, and three desserts on the Restaurant Week menu. That’s why it’s a good idea to bring a friend—and share. I started with the farmers’ market salad: raw, shaved Brussels sprouts, kale, Gorgonzola, apples, and candied pecans dressed with white balsamic. My friend had the local date plate with Point Reyes blue cheese, toasted almonds, and garlic chive oil. Both were excellent.

Next, I enjoyed the 10-layer lasagna with wild mushrooms, tomatoes, chevre, asparagus, ricotta, herb Alfredo, pesto, and fontina. Don’t let the 10-layer part intimidate you; it wasn’t huge, just large enough that I ate every delicious bit. The Santa Barbara pizza was as wonderful as everyone said; the shaved Brussels sprouts, applewood bacon, fontina, local dates, chives, and red sauce on a crispy crust created a fresh and unique taste. Macaroni and cheese wasn’t on the Restaurant Week menu, but locals said it was terrific so we ordered it on the side. They were right; it was hearty, cheesy, and zesty. Dessert was incredible. I got the butterscotch pot du crème, with crème fraîche, and Maldon flaked sea salt. OMG, it was like a huge, chewy, sweet and salty caramel. Fantastic. “Did you have it with bacon on top?” Andie asked. “No,” I replied. “Ask for it with bacon next time. It’s the most favorite dessert.” My friend got the strawberry shortcake with local berries, a buttermilk biscuit, and amaretto vanilla bean cream; it was as tasty as it sounds.

The Cork & Fork grew out of the popularity of Andie’s cooking school, Cooking with Class, located next door. “We started offering weekly small plates and wine by the glass in the cooking school and it just mushroomed,” she explained. The Cork and Fork is open for dinner Wednesday through Sunday. No reservations are required to sit at the bar, but get there early. Reservations are needed for a table. Happy hour is from 4 to 6 p.m., with small plates available for less than $10.