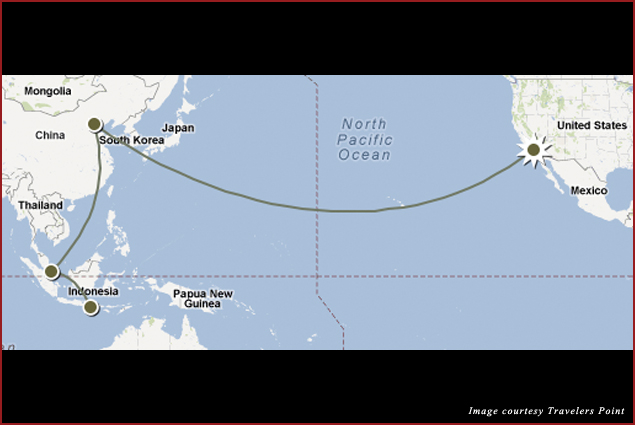 What a trip! Three flights from Los Angeles to Bali; with the help of modern chemistry we slept through most of the first 12-hour flight from LAX to PEK. I think I slept nearly 10 hours. I even fell asleep before we took off. Our flight was at 1:40am July 2nd.

My cousins, Eric and Krystie, who just moved to Los Angeles on the day before we left, took us to dinner and from there to the airport. We passed Air China in Terminal 2 at Los Angeles Airport because we were so sure we would leave from Terminal 4 – the Tom Bradley International Terminal — but we were wrong.

Luckily together our two big packs aren’t so heavy– so schlepping back to the other terminal was not too painful. One of the TSA men commented on how most people pay extra so that each of their bags can be over the 50-pound weight limit, yet together we have less than one person might have.

All in all, the Los Angeles airport is an embarrassment compared to other countries’ international hubs. We marveled at how modern, big and spacious the Beijing airport felt. Not like LAX. We went through immigration and on the tram to pick up our next two boarding passes.

Honestly, it was a bit confusing, but we survived and we got help from a few officials. The tram and all the other signs were in English and Chinese; we really did not think we had to go through immigration as we were in transit and had no visa. We found a Starbucks, had a snack, and wandered about until our next flight. We could not log in to the “free Wifi” but we did not have much to say yet to anyone back home anyway. 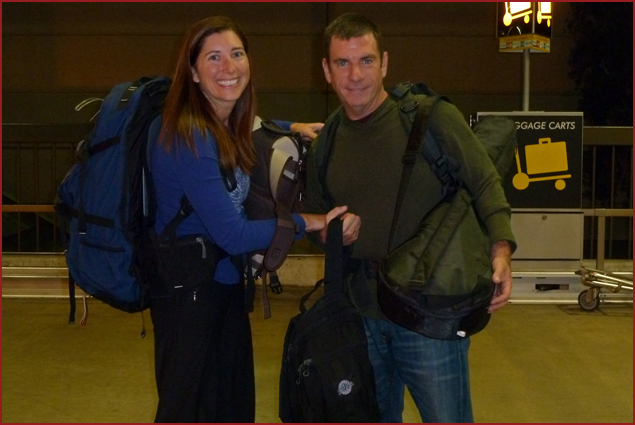 Our paperwork for the three flights said “no meals” on all three flights, which seemed odd for international flights, but in fact there was food on all of them.  The Air China B777-300ER was surprisingly nice.

I had thought that our two legs from Beijing to Singapore (six hours) and Singapore to Bali (two hours) would be the most enjoyable segments of the trip, but our twelve hours on Air China were the best. Biggest seats in economy, nicest amenities, and better movies. If I’d wanted to pay the big bucks for first class, the sleeping pods for Air China looked phenomenal!

Other than the thirty-minute line to get a taxi coupon at the Bali airport, and the half an hour of bumper-to-bumper traffic to our hotel in Kuta (which reminded me of Los Angeles evening traffic, although in Los Angeles no one creates an extra lane), the whole journey could not have been much better or easier. And that fact that our three flights were paid with United Frequent Flyer Miles made the start to our year’s journey to the East very pleasant. We are excited to be back in Bali. More about the Swiss Bel Hotel: Bali Kuta Resort soon!  Lisa

Video from our flight to Bali:

Budget? How Do They Travel for a Year? Hunting for Hotel Bargains