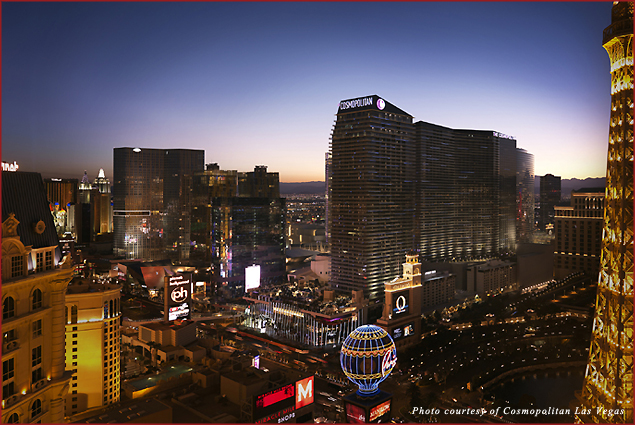 Since I moved overseas, my mother and I started traveling together to celebrate our birthdays, which are a week apart. This year was special because she was turning 50, and Las Vegas was the obvious choice. It’s not typically known as a mother-daughter destination, but there is so much more to Vegas than gambling. On this trip our itinerary included a bit of luxury, relaxation, nature, entertainment, and of course, great food. 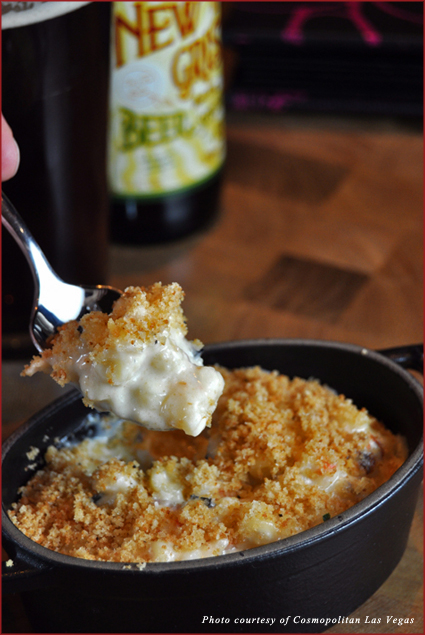 Day 1
We landed in Vegas on my mother’s birthday and I was destined to make it memorable. The schedule was pretty tight, so we immediately hit the ground running. Before checking in at The Cosmopolitan Las Vegas, we decided to get a bite to eat. We happened upon Holsteins Shakes and Buns, not knowing much about the restaurant. Holsteins offered the normal food you would expect from a burger joint but then it shakes things up (pun intended) by adding a touch of sophistication to traditional American fare.The clear crowd favorite was the truffle lobster macaroni and cheese. This was offered as a “sample” but we clearly could have eaten our weight in it.

After a light lunch we made it up to our Terrace Room on the 28th floor. Even though we were in a five-star resort, the room resembled a residential living space with a sitting area, kitchenette, and a transitional dressing area which led to the bedroom. The oversized bathroom had dual sinks, a separate toilet room, and a walk-in washroom with a rain shower and a Japanese soaking tub. 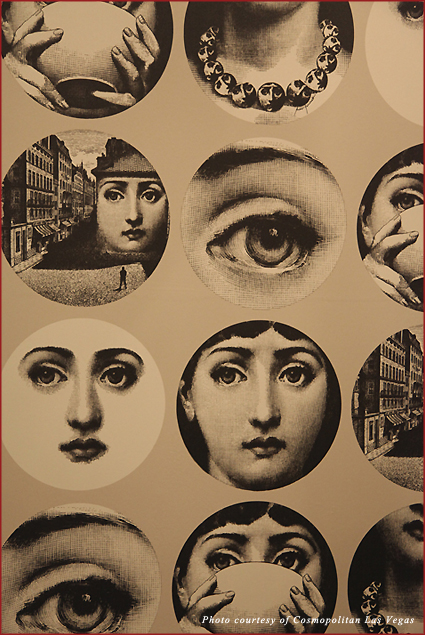 As a lover of boutique hotels, I was instantly in love with the bespoke design details, especially the hand-screenprinted wallpaper that lined the closets. The most impressive part of our contemporary room was the massive terrace that looked out on the Bellagio fountains and gave us a panoramic view of the Vegas Strip and the mountains in the distance.

We didn’t have much time to drool over our view or play with all the gadgets in the room because I arranged spa treatments and pedicures for the afternoon. It was my mother’s 50th birthday, after all, and I wanted her to be spoiled. We spent our afternoon being pampered at The Sahra Spa and Hammam at the Cosmopolitan Las Vegas, where we received Moon Flower Detoxifying Rituals.

There were multiple steps to the “ritual.” First there was warm mud that soaked out the impurities in the skin, then after washing off in a private shower there was a massage. After the massage, a mixture of evening primrose oil, shea butter, aloe vera, olive oil, and moonflower was applied to the skin. I met my mother in the steam room and we marinated for a while before showering and getting dressed.

Later on we were led to the glamorous Violet Hour Salon for our deluxe pedicures. The two ladies that gave us our pedicures were not only professional but extremely friendly, and they gave us the inside scoop on non-tourist shopping areas.

Detoxification took its toll on our appetites, and we ate at the Wicked Spoon, the Cosmopolitan Las Vegas in-house buffet. The food was good but the variety was overwhelming. Once we got back to the room, we were welcomed by a luscious cake covered in chocolate ganache and fresh fruit that I secretly ordered to celebrate my mom’s big day.

The surprises for the night did not end there. The last activity I planned for the evening was the Vegas Strip Night Helicopter Tour with Maverick Tours. Seeing Las Vegas from that perspective was truly a one-of-a-kind experience and something my mother and I will never forget. Being in a helicopter was interesting – both scary and exciting at the same time. My mom suffers from mild claustrophobia but the rhythm of the propellers put her at ease and she was mesmerized by the Vegas lights. She had an expression on her face on the way home – I’m not sure if she was happy or still in shock. 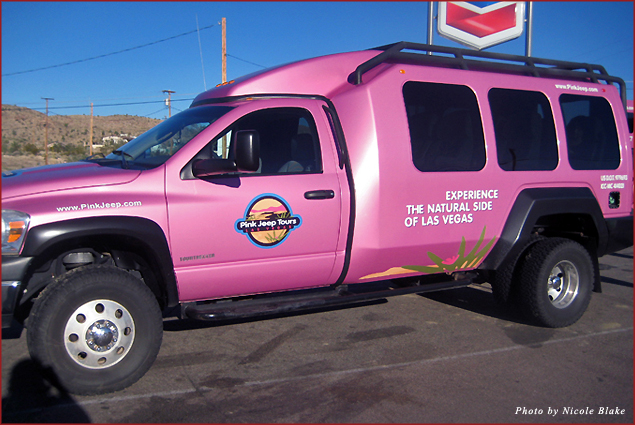 Day 2
We fled Las Vegas for a day and headed out to the south rim of the Grand Canyon with Pink Jeep Tours. Our tour guide, Mike, met us outside of our hotel bright and early. If you aren’t awake, Mike’s personality coupled with a huge pink tour trekker was enough to lift your spirits. It was a small tour group. Fridays are typically slow days for tours out of Las Vegas, since many people are just arriving or fleeing the city with whatever money and dignity they have left.

Our tour began with a five-hour drive to the south rim in Arizona. The journey took us through the Mojave Desert where we saw Joshua trees. Along the way we stopped at a genuine Native American trading post and drove on the historical Route 66. The ride was interesting because our tour guide was a wealth of knowledge. You could really tell that he enjoyed his job, and this made the tour entertaining and educational. 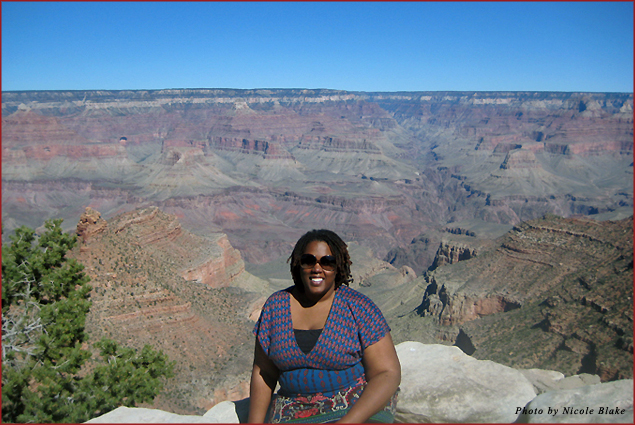 Once at the canyon, no amount of pictures or video could have prepared us for what we saw in person. Words really fail me when I try to describe how beautiful everything was. I recommend that anyone heading to Las Vegas check out the natural landscapes surrounding the city, because it is totally worth it. My mother and I had nothing but great things to say about Mike and his tour. It was the highlight of our trip.

After the 13-hour tour, we should have just eaten and gone to bed, but it wouldn’t be Vegas without shenanigans. I got tickets to see The Chippendales at the Rio. We didn’t know what to expect, and we thought it was good idea to get about 50 dollars in singles. Looking back, that was silly – it wasn’t like we were going to a strip club. 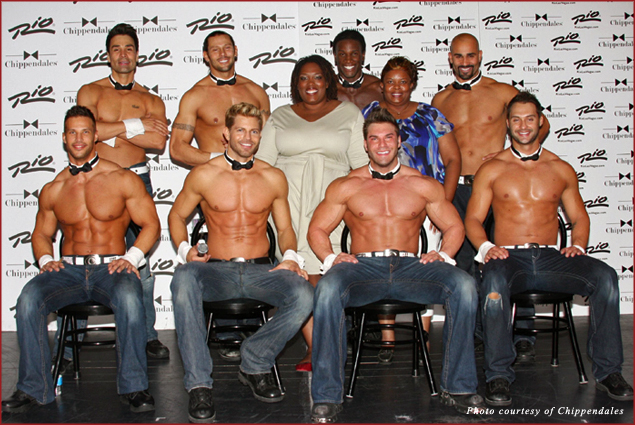 The Chippendales and their bow ties are world-famous, and it was a proper Vegas show: great production value, costume changes, and elaborate sets. The show incorporated humor, singing, and choreography. The guys were not just hunky pieces of beefcake and man-candy – they were quite talented as well.

There was also the not-so-surprising element of audience participation. We had seats right in the front, and tried our best to not to make eye contact in case any of the performers had the urge to hump our legs. That didn’t work as well as I hoped. After a while, I just went with the flow ::blushes::. A few dry humps never killed anybody.

Day 3
Saturday was a much more low-key day for us. We walked around doing some window shopping and decided to catch some brunch/lunch at the Peppermill Restaurant and Fireside Lounge. Despite its horribly retro interior, the Peppermill is a place I always visit when I am in town. It’s pretty popular and there is almost always a wait for a table. They have all-day breakfast and great service – what’s not to love? I got yummy hot chocolate with Baileys, which was served to us by a bartender who was unintentionally dressed like Trinity from the Matrix.

Later that evening, we skipped dinner because we were still full from brunch. We relaxed for a little bit in the room because we did a fair bit of walking under the hot sun. We had tickets to go to see Human Nature: The Ultimate Celebration of Motown Presented by Smokey Robinson. I caught the show the last time I was in Las Vegas and enjoyed it so much that I wanted to share the experience with my mother. 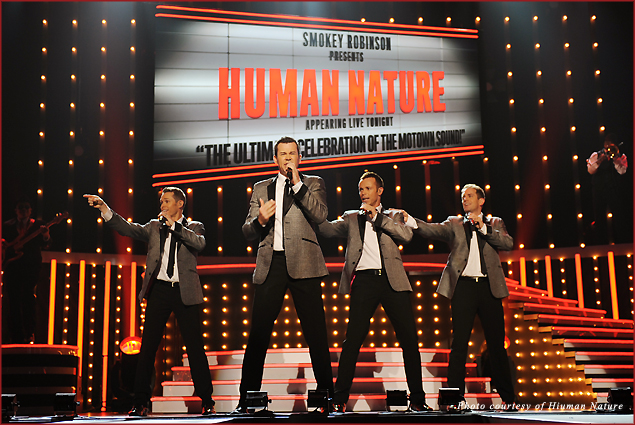 Human Nature is a former Australian boy band that now performs renditions of Motown classic hits. The four blokes sing beautiful harmonies and dance like the Four Tops, all the while wearing dapper three-piece suits. I knew my mom would love it, but she seemed less than enthused. She trusted me for daytime activities but after helicopters and pelvic thrusting she was doubting my judgment when it came to the evening. I convinced her she wouldn’t be emotionally scarred during this show, and we got dressed and took the fast air-conditioned Monorail to the Imperial Palace.

Once the show started, she was in love. She was singing and dancing and having a grand old time. I warned her to not draw too much attention to herself because they like to bring people up on stage. I noticed during the first act that the lead singer was pointing at her and smiling, but at that point it was too late. She was in his sights and destined for embarrassment.

As I suspected, during the song “My Girl,” the lead singer informed the crowd that he was looking for someone in the audience and my mother immediately got quiet. She knew as well as I did that he was coming for her. He pushed his way down to our table and asked her to come on stage. I have never seen my mother blush so much. He asked her to sing and dance, and she got hugs and kisses from all of them. After the show many of the audience members came up to her to congratulate her. She ended up getting a signed CD and show book as well as pictures. What a night!!

Day 4
It was finally my birthday, and I just wanted to sleep in and have a breakfast burrito. We ordered room service, checked out, and then made our way to the airport. What a weekend! Operation Unforgettable 50th was a huge success.