One Hundred Years of Tradition and Luxury at Suvretta House in St. Moritz 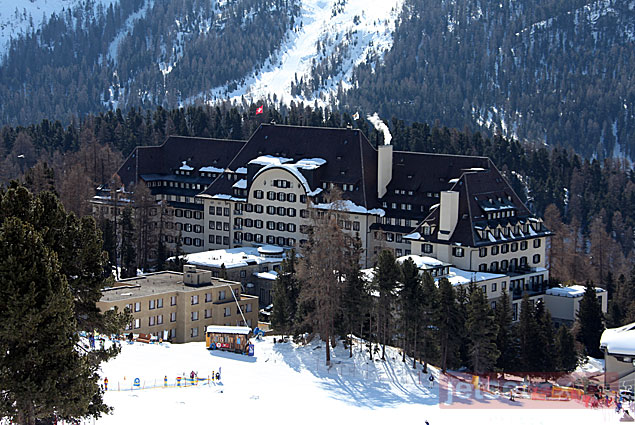 Jason and I traveled by train from Bern to St. Moritz, Switzerland. It was a long trip, but one he and I liked very much as part of our journey was on board the Golden Pass Scenic Train. We weaved through small Swiss villages full of intricately carved wooden buildings and snowy mountains filled with lakes and forests.

Our experience in St. Moritz began when we arrived at the train station and were picked up by Suvretta House in a great classic Ford truck. I know an old Ford truck doesn’t sound very luxurious, but if you understand what it takes to maintain and run a classic such as this little beauty then you can appreciate what I am saying. We wound through the small mountain roads, through the main drag of St. Moritz, and on up to the slopes where our hotel was located. We drove in and were warmly greeted by name from the hotel staff. 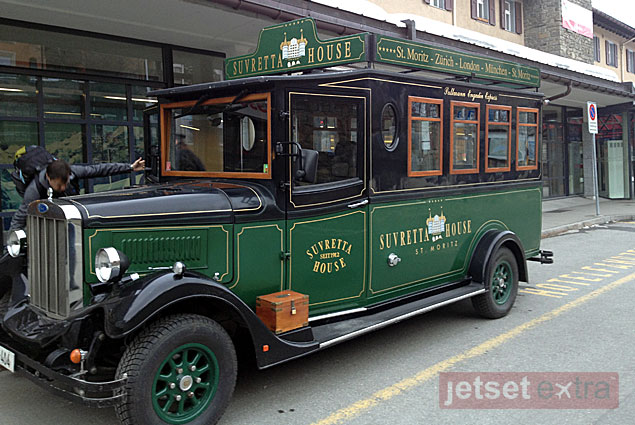 Suvretta House is a 100-year-old hotel founded by Anton Sebastian Bon. Vic and Helen Jacob now run it and have been overseeing the property since 1989.

We caught up with Mr. Jacob and talked about the traditions that live on in this well-cared-for hotel. I think the most important thing he talked with us about is how this is really a second home for so many of the families who spend their vacations here. Many families come back season after season. Legacies start with young kids coming with their parents then growing up into adults and bringing their own children; this hotel has seen many lives begin, mature, and evolve. Being a part of it from year to year is a very special relationship many of the staff hold dear to their hearts and look forward to each and every season. Jason and I were so moved by the story we have been considering bringing our own kids to Suvretta House to start our own tradition.

Speaking of tradition, Mr. Jacob took Jason and me to see some of his favorite spots on the hotel property. One, the wine cellar, is where lots of “found” memories are kept, such as the original marquee for the hotel, which Mr. Jacob discovered in a nearby barn, as well as a letter found in an air vent during renovations. A man wrote the letter to a woman in 1939 on one of the restaurant’s menus while he was dining in the Grand Restaurant. In German the man wrote, “Hast du vor? Ich glaube nicht mehr an Dich.” Loosely translated it means, “What are you doing here? I don’t think I can still believe in you.” My suspicion is the man saw his girlfriend dining with another man and wasn’t happy about it. What a sad story, but what a great piece of history to find. 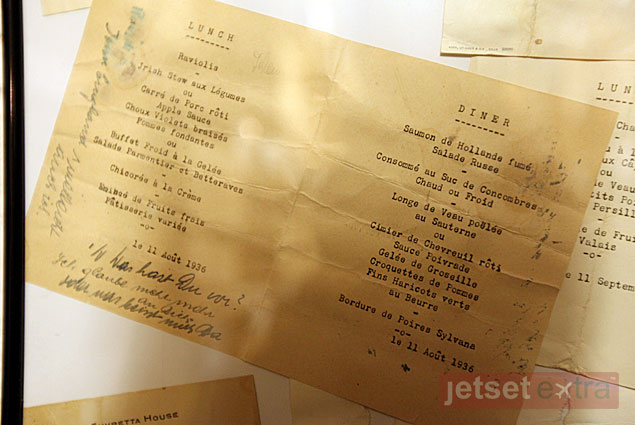 Other traditions, such as requiring jackets and ties for gentlemen in the public areas after 5 p.m. and dining in the Grand Restaurant at one’s family table, are alive and well, but some very state-of-the-art facilities are available to guests as well. The newly introduced Snowsport Centre, for example. In 2011, construction began on the ski room, which now has more than 380 heated lockers for guests to store their damp, cold clothes and return the next day to find them warm and dry. The ski shop and sales desk for the school are also located in the center; here you can get your skis worked on or rent some if you didn’t bring your own. The school has more than more than 200 instructors during its high season and offers lessons to anyone at any age.

Suvretta House also has its own private lift right outside the front door of the hotel. The first ever ski lift was built here and opened in 1935. Hollywood’s very own Douglas Fairbanks cut the tape and was the first person to be “lifted” up the mountain. This is the go-to ski resort in Switzerland—and probably the world. The birthplace of winter sports, St. Moritz has thousands of guests each year who come to enjoy their winter vacation and either continue on with, or start new family traditions of vacationing in the winter wonderland of snow and sun. 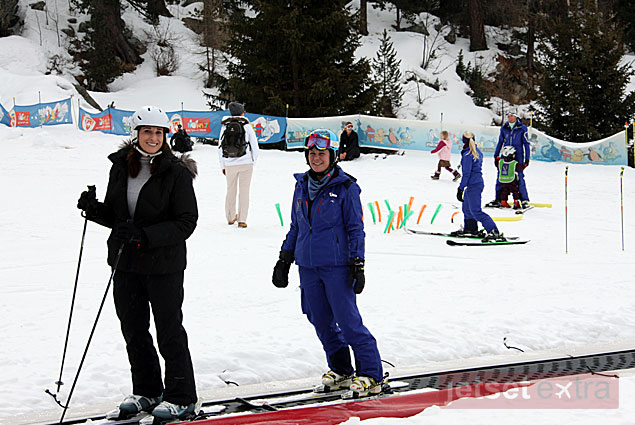 I was signed up to do a ski lesson at Suvretta House’s Snowsport Centre. Jason opted out as he thought it would be more entertaining to catch me (the non-skier) taking a ski lesson on video. As a California girl who grew up at the beach, I don’t ski or really like the snow and cold, but when in Switzerland, one must ski. So I was fitted with some boots, skis, and poles and introduced to Jessica Pünchera, who was to be my instructor for the morning. I then found out by rumor that Jessica was not only a professional skier but also won a contest and was named the “Best Ski Instructor in the World.” Yes, this non-skier was about to be schooled by the best of the best. If she couldn’t teach me to like skiing, no one could! Right?

Our dinner began by buying Jason a new dinner jacket, as the one we brought with us was not the jacket he thought he was packing (our dry cleaner mixed up his jacket with someone else’s). His sleeves were about four inches too short, and the jacket made him look like he was going to fight a bull instead of enjoy a Michelin-star dinner. A new dinner jacket and tie later, we headed down to dinner and enjoyed a wonderful night of amazing food, wine, and hospitality. Jason and I were enjoying ourselves so much we were the last ones to leave the restaurant. 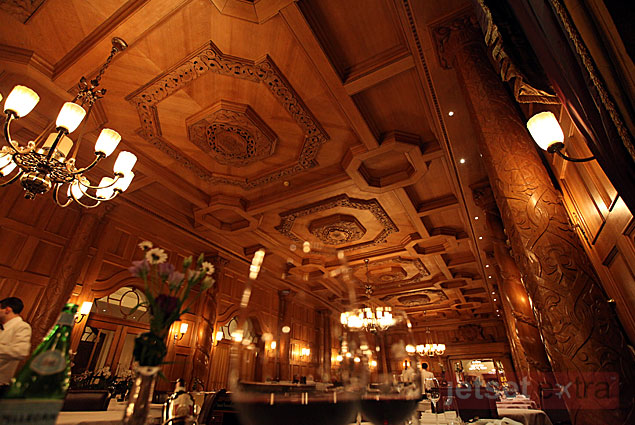 Another more casual option for guests is the Suvretta Stube. Though the atmosphere is more relaxed the food isn’t lacking by any means. We ate at Suvretta Stube on our last night at the hotel, where we found ourselves enjoying raclette, one of Switzerland’s traditional dishes. Raclette is the melting cheese of Switzerland and also the name of the dish. Its name is derived from the term racler, which means “to scrape.” This ooey, gooey deliciousness is a wheel of cheese cut in half and placed on a special type of warmer made just for this dish. The cut end of the cheese is heated until the cheese begins to melt and the ends begin to crisp up. Then, at the exact moment of perfection, the chef takes it off of the heat and scrapes off the melted crisp cheese onto a plate. The cheese is then served with boiled potatoes, vegetables, and cornichons. It was delightful and so much fun. We ate until our stomachs couldn’t stand any more then very slowly adjourned to our room for a good night’s sleep full of dreams of gooey, delicious cheese. 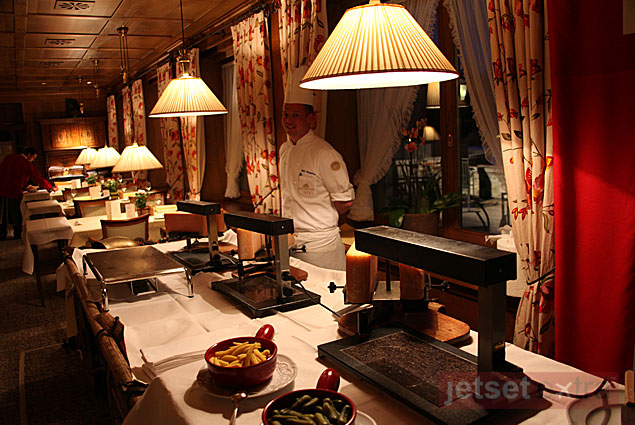 So many other things are available to Suvretta House guests that we didn’t have time to experience. When you go be sure to check out the spa, outdoor hot tub, afternoon tea service, Olympic-sized swimming pool, and summer sports options. Another visit for us is in order during the summer season. See you soon, Suvretta House!