My Weekend With Angels 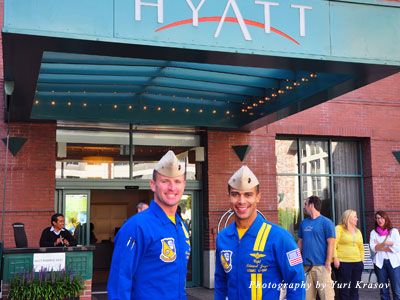 To be honest, Fleet Week in San Francisco was not high on my bucket list. I’m more of an anti-disciplinary type, and while I like men in uniform as much as the next girl, I’m hopelessly married after all. However, when I got a special invitation to participate in a VIP viewing of the Fleet Fest Air Show last weekend, there was no way to keep it from dear husband – a former Polar officer, and a big fan of all things military, naval, and naval aviation.

That’s how we ended up checking in Hyatt at Fisherman’s Wharf, where a team of Blue Angels happened to land before the big event. 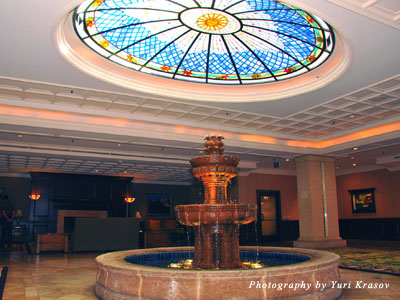 On Friday night, we watched an invasion of out-of-town Angels’ fans in signature T-shirts, and explored hotel facilities. In a naval-theme conference hall with a fountain and a skylight there was an exhibition displaying the hotel’s historical background.

Apparently, the Hyatt’s location used to be an underwater dumping ground where good San-Franciscans discarded their trash back in the 19th century, thus extending the dry land and benefiting the city.

After the Big Quake, the original building was occupied by the Joseph Musto Marble Works Company, which supplied cut and polished marble to the construction of City Hall. The hotel still bears architectural features of the former marble workshop, and the name of the original owner is preserved in the Enoteca Musto restaurant on premise.

On Saturday morning, we were eating our well-catered breakfast there (made by chef Hideki Myo) hoping to see some Angels having Bloody Marys, but then I realized that celestial beings probably did not eat at all, or at least not before their twisty precision flights.

Luckily, they did show up, greeted by a crowd of fans and almost blinded by camera flashes. Major Brendan Burks and Captain Edward Jorge, both unbelievably trim and fit in their blue-and-gold uniforms, and surprisingly down to Earth, were smiling, answering questions, and posing patiently with various children and grandmas in by the hotel entrance. 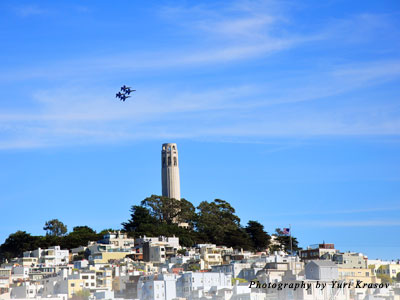 I’ve learned that the Angels usually have ten or more years of flying experience (and only about 4% body fat) before applying to the team. They spend three years in the Blue Angels corps, flying the oldest aircrafts, properly maintained and painted in their signature colors. Every year when some pilots move on with their careers and approximately six positions become available, there would be 60-80 applications filled to take their places.

Team members select their future colleagues themselves. It is too important to have physically and psychologically compatible teammates to leave the task to some hiring bureaucrats. As Major Burks put it, “All it takes is one crazy person to screw everything up.” No buddy hook-ups work. The person has to be right for the job. Besides, the pilots spend more time with their colleagues than with their wives and children.

Training sessions usually go on from mid-November to mid-March, and then air shows start and continue every weekend in different places. Blue Angels perform in 35 cities pinpointed by Pentagon as places that need some extra recruiting effort.

Constant repetitions and practicing six days a week make the pilots fearless and capable of performing highly choreographed precision formations of four to six planes flying with 400 mi/hour speed only 18 inches apart from each other. No radars or sensors are being used in coordinating their positions, just visual orientation.

Currently there are about 12 females in training on the Blue Angel team. They will start participating in air shows in the upcoming years. Apparently, these days the Angels get more and more applications from women pilots. 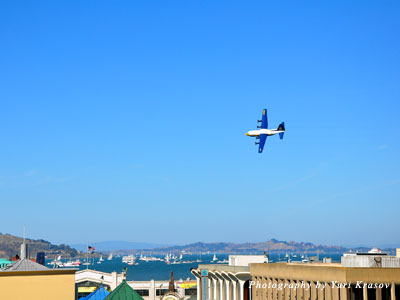 Both Major Burks and Captain Jorge were flying four-engine C-130 cargo plane, a.k.a. Fat Albert on Saturday, as we watched its slow, low passage over the city skyline.

After seeing the Angels so close, it was both scary and exciting to follow the air ballet of light-winged jets, leaving behind neat waves of white, red, and blue smoke. They were soaring straight up, then down, making arches and corkscrews, turning upside down, and drawing jet-stream hearts in the sky.

After the show, I felt strangely invigorated and ready to engage in some risky action on perpetually overcrowded Pier 39. RocketBoat, a Blue & Gold Fleet novelty, seemed enticing enough. While I was holding on for dear life to a metal bar in front of me during a 30-minute jumpy ride I fully realized why the first mate called our captain a maniac. 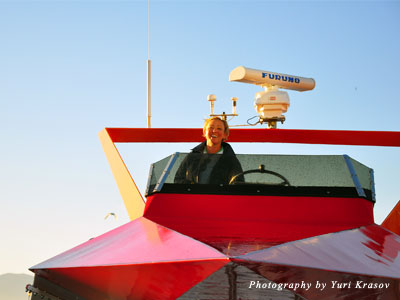 On our way off the boat, I caught a glimpse of a “maniac’s” smiling, girly face. I guess as soon as those girls start performing with the Blue Angels, we’ll see some record-breaking shows – so I’ll be back for that.