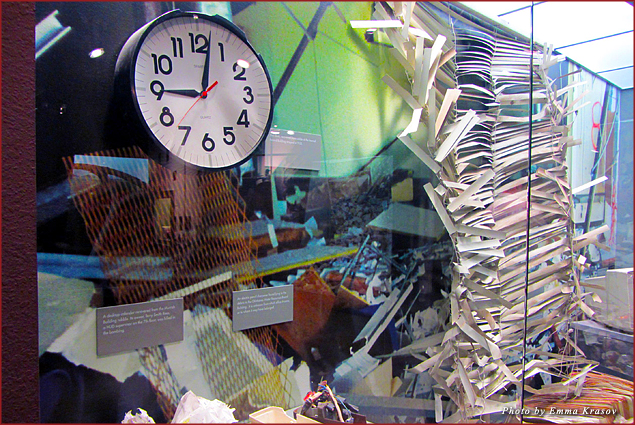 I could never imagine that an empty room with a two-minute recording of a court proceeding would become a memory so powerful. Every time I think about it, my eyes tear up.

A visit to the Oklahoma City National Memorial, dedicated to the victims, survivors, and rescuers of the Oklahoma City Bombing, starts in this reconstruction of a hearing room in the Journal-Record Building. It’s next to the former site of the Alfred P. Murrah Federal Building destroyed by a bomb at 9:02 a.m. on April 19, 1995. 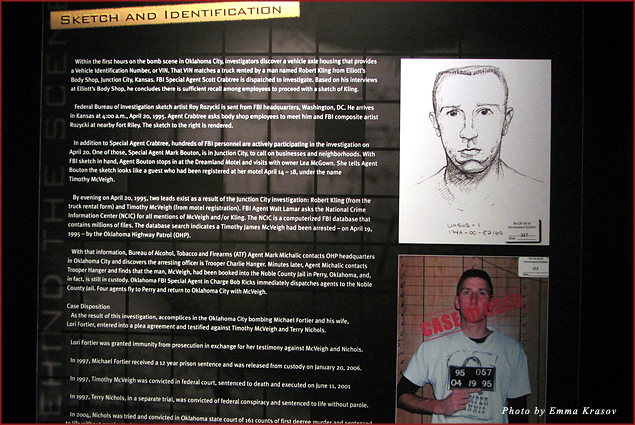 On a regular workday morning, court was in session, the tape recorder was running, and 168 people in the building, including 19 children in the day-care center on the second floor, were living the last two minutes of their lives. Timothy McVeigh, an army veteran and security guard who was angry with the government set off a homemade explosive device in a rented truck parked in front of the building. 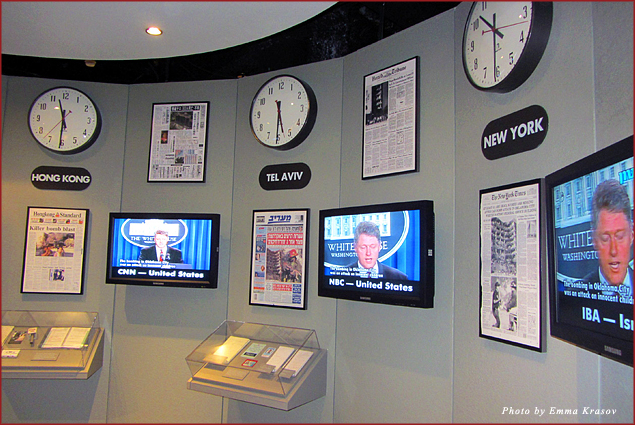 The visitors to the Memorial hear the blast and the screams recorded on tape that day, and then the door opens to the museum display of the office walls and ceiling collapsed in the explosion, personal items recovered from the ruin, photographs of the victims, and media coverage from around the globe. 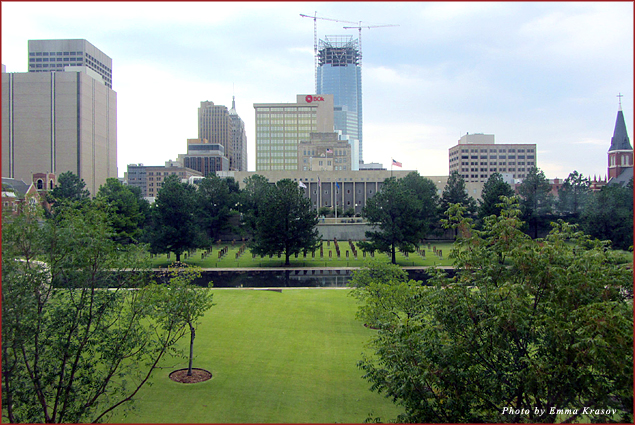 The Oklahoma City National Memorial, created on the site of the tragedy “to honor the victims, survivors, rescuers, and all who were changed forever on April 19, 1995,” includes the Outdoor Symbolic Memorial – rows of 168 lighted chairs, 19 of them of a smaller size, along the Reflecting Pool in the middle of the green lawn.

Oklahoma City, spanning 621 square miles, is one of the most fascinating among large metropolitan areas in terms of history and geography. It was founded in a single day on April 22, 1889. In response to President Benjamin Harrison’s proclamation which opened Indian Territory to settlement, 10,000 people from near and far participated in the Land Run to claim their piece of unassigned land. The newly-born Oklahoma City was incorporated in 1890 and became one of the fastest-growing places in the country at the time. Oklahoma was admitted to the Union in 1907. In 1928, oil was discovered within the city limits and even under the State Capitol, and the growth continued. 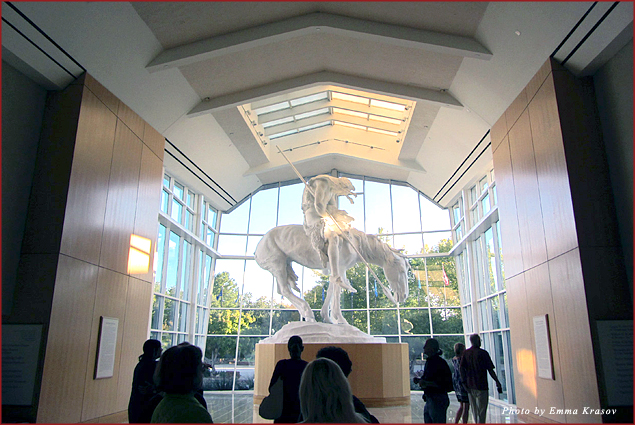 The National Cowboy and Western Heritage Museum presents collections of Western art and archival materials dedicated to historical traditions and peoples and cultures of the area.

The galleries include American Cowboy, Frontier West, American Rodeo, Native American, Fine Firearms, and many open with a monumental sculpture. One of the most prominent examples, End of the Trail, by James Earle Fraser, is located in the enormous atrium. 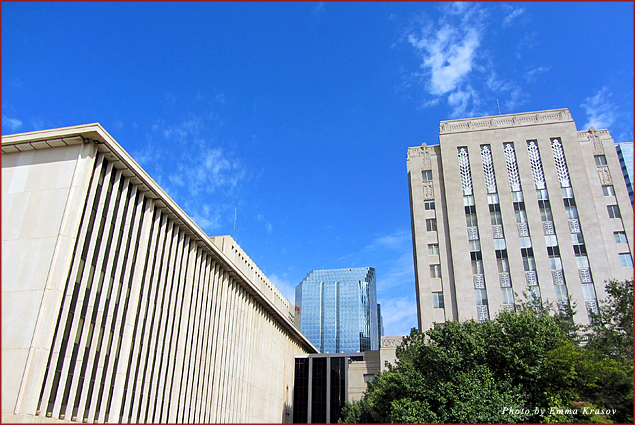 Downtown, among the beautiful Art Deco buildings, there is the Oklahoma City Museum of Art, built entirely with private funds and located in the Donald W. Reynolds Visual Arts Center. Its comprehensive collection, mostly of 19th and 20th century and contemporary art, includes the world’s largest 55-foot Dale Chihuly glass sculpture in the Museum’s atrium. 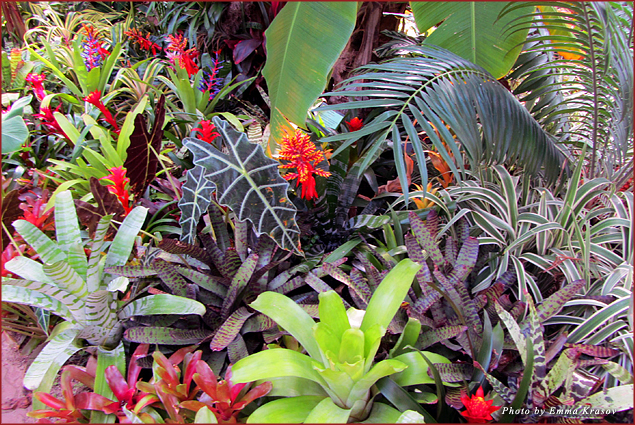 In 1993, the Metropolitan Area Projects (MAPS) further enriched the downtown area with a new baseball park, library, convention center and fairgrounds, and a canal running through the Bricktown entertainment district. 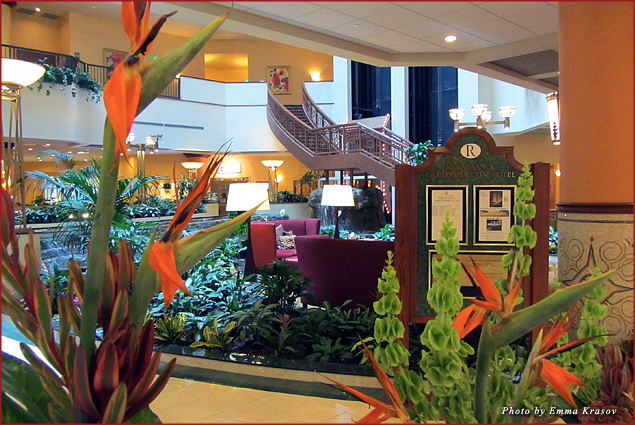 Staying at the majestic Renaissance Hotel, I walked to Bricktown and hailed a water taxi for a ride to the Centennial Land Run Monument, a sculpture-in-progress which will be one of the largest freestanding bronzes in the world upon completion. Its already installed pieces – life-size horses and riders – are impressive enough, but in 2015 the Land Run procession will extend to 365x36x16 feet.