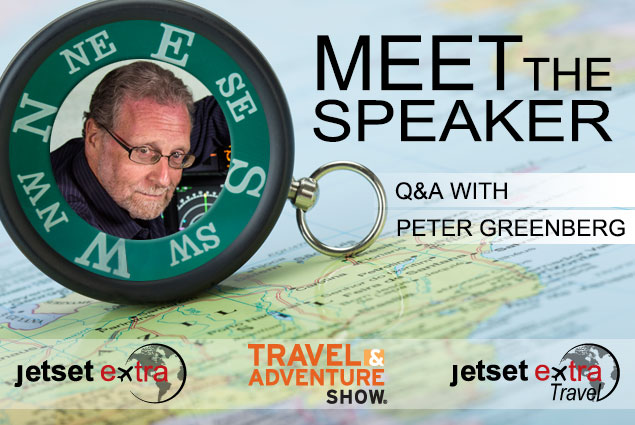 The Travel & Adventure Show heads to San Diego, California, March 29-30, for two days of discovery, discussion, and delight. Peter Greenberg, a multiple Emmy Award winning investigative reporter and producer, spoke at the Los Angeles Travel & Adventure Show earlier this year and inspired travelers with his tales of jet setting around the globe and his travel predictions for the year. We caught up with Peter to get more of his expert insight.

Q: When and how did travel become a significant part of your life?

A: Travel has been a part of my life since I was six months old and took my first airplane flight. I don’t remember the particular flight, of course, but the flight crew gave me a signed, beautifully illustrated certificate, which still hangs on my wall. I was the first member of the American Airlines “sky cradle” club. I’m serious.

Q: Why do you think traveling is important?

A: It’s not just important; it’s essential. As clichéd as it sounds it does break down barriers and build bridges of understanding—every time. Nothing beats the power of seeing eye-to-eye; you do that by meeting face-to-face, and travel accomplishes that. It allows for something crucially important: the conversation.

Q: What topic(s) did you speak about at the Travel & Adventure Show?

A: First and foremost, the brave new world of the process of travel—and barriers to travel. I also spoke about how the process is getting more difficult; no amount of technology can replace the absence of common sense.

Q: How do you hope to inspire future travelers?

A: My job is not to promote travel but to present options and the kind of information that allows present and future travelers to make informed, intelligent decisions about their options when it comes to travel.

Q: What is one piece of advice you wish someone had shared with you before you set off to travel the world?

A: Actually, I got lucky. A fellow journalist told me early on in my career—when I was in college and working for Newsweek—that you should never take a no from someone not empowered to give you a yes in the first place. It’s been my mantra ever since, and I use that every day.

Q: Do you have one destination you find yourself visiting over and over again? What makes this place so special?

A: My criterion for a special place is actually quite specific; it goes beyond mere beauty or culture or food. It’s where I sleep the best. I have about five of them around the world, and I go back there—to each of them—at least twice a year. I return to one of them at least once every 10 to 12 days.

Q: What was one of your most memorable travel experiences in 2013?

A: Kenya, last September. I was there to report on hotels, but I found myself right in the center of the mall shootout in Nairobi. I was one of the first people on the ground and reported live from there for CBS. It was memorable on a number of levels, perhaps the most surprising of which was that just eight blocks away from the siege, it was business as usual in Nairobi, and travelers were out in the Mara having a great time in spite of the event. People need to put acts of terror and violence in historical and spatial perspective. Would I go to Cairo now? In a heartbeat. Why? Eight blocks away from Tahrir Square, it’s business as usual. And that also applies throughout the rest of the country.

Although Peter won’t be at the San Diego show, you can still catch Samantha Brown, Patricia Schultz, and Don Wildman speaking about their travel experiences! Tickets are just $8 with the promo code “JETSET.” Get yours today and be sure to stop by the Jetset Extra booth (#328).