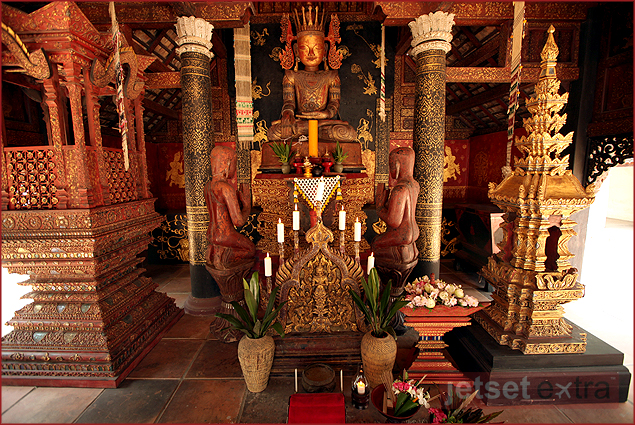 Suchet Suwanmongkol is an easygoing man with a casual style and a lighthearted sense of humor. He greets everyone with a hearty smile and can talk for days about anything pertaining to art and photography. Often dressed in shirt and jeans, Suchet appears to be your average Thai man. Most people would never suspect that he is the owner of the famous Mandarin Oriental Dhara Dhevi hotel in Chiang Mai, Thailand, and the mastermind behind its creation.

Check out our Facebook gallery of Chiang Mai & Pattaya

What started as a few guest residences for visiting friends and family is now a 60-acre mini-city, complete with 123 villas and suites, a cultural center, and even its own rice paddies. On a recent trip to Thailand, Jetset Extra had the rare opportunity to sit down with Suchet and get the behind-the-scenes story on the creation of his masterpiece resort. 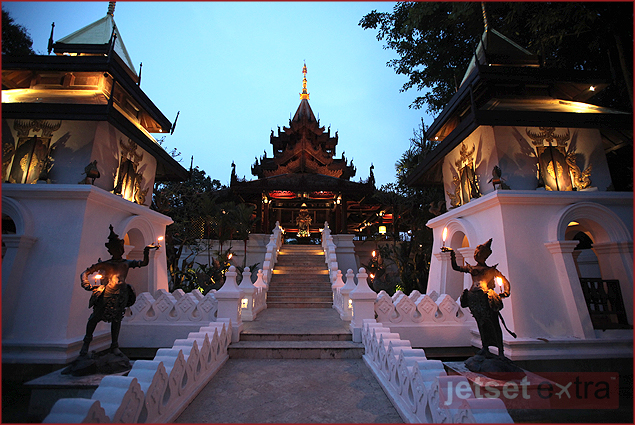 Dhara Dhevi is Suchet’s first venture into the hotel industry. He got his start as an auto dealer in Southern Thailand, and quickly became one of the largest dealers in the country before the Thai economy fell into a deep recession (the start of the 1997 Asian financial crisis). The Thai baht was severely devalued, and Suchet lost nearly $100 million U.S. overnight. Soon after, Suchet counted his losses and decided to retire from the auto business. In 1999, he moved north to Chiang Mai. 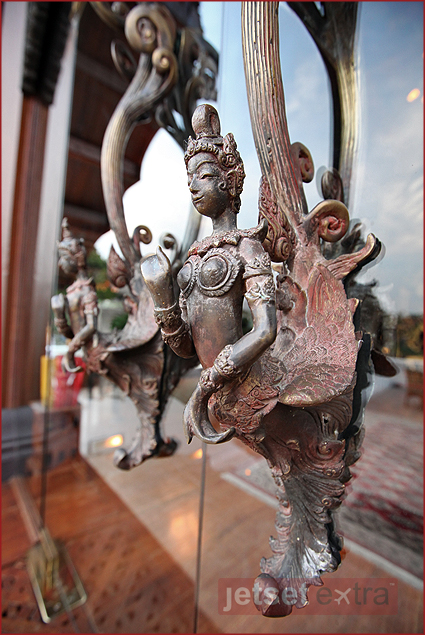 Suchet spent a year work-free and living the “easy life” (as he called it) in Chiang Mai. But he was only 41 years old and felt that it was too early to truly retire, so he started dreaming of a new business venture. He was inspired by the success of the nearby Four Seasons Resort, and felt that he too could do well in the hospitality industry. Suchet soon opened a small Thai restaurant, and with its success he aimed his sights slightly higher—and so began creating Dhara Dhevi.

As an art lover and antique collector, Suchet wanted to build something that was more than just a place for guests to sleep. He envisioned a hotel that would preserve the local region’s Lanna culture—something Suchet felt was getting lost among the younger generations. “If you talk to the new generation of Thai kid, I don’t think they can differentiate between an ox and buffalo…they can do almost anything with computers, but just ask them what’s the difference between [the ox and buffalo] and they don’t know,” explained Suchet. Realizing the need to reintroduce people to old Thai culture, Suchet began designing Dhara Dhevi to be a place where people won’t just see Thailand – they can also experience it. 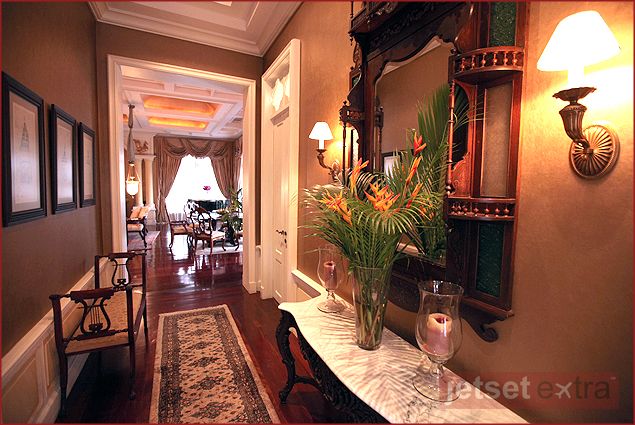 Suchet purchased property from 68 different owners over the course of several months and hired conceptual designer (and lover of all things Lanna) Rachen Intawong to head the project. Suchet also recruited several local architects and artists to handle the design and intricate details of the resort, including the hand-carved teakwood featured on the roof of every building. To ensure the cultural authenticity of the resort’s design, Suchet sent his team of architects and artists to explore the architecture and culture of Thailand’s neighbors and cultural influences: Myanmar, Laos, Cambodia, and Southern China. 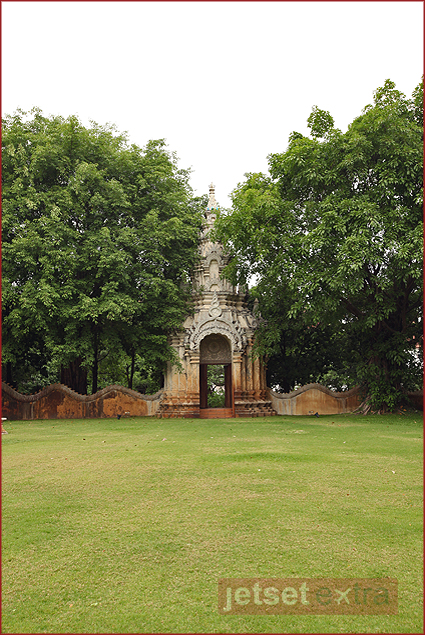 In 2002, construction began on the temple, the first building of the resort. Its small size was ideal for a “trial run” to see if they could in fact build a structure with such artistic detail. The resort quickly expanded after the successful completion of the temple, and in December 2004, Dhara Dhevi had a soft opening with 40 guest rooms. Today, the resort has 54 European-influenced colonial suites, 64 private villas built in traditional Lanna-style architecture, and five large residences, ideal for private parties up to 12. 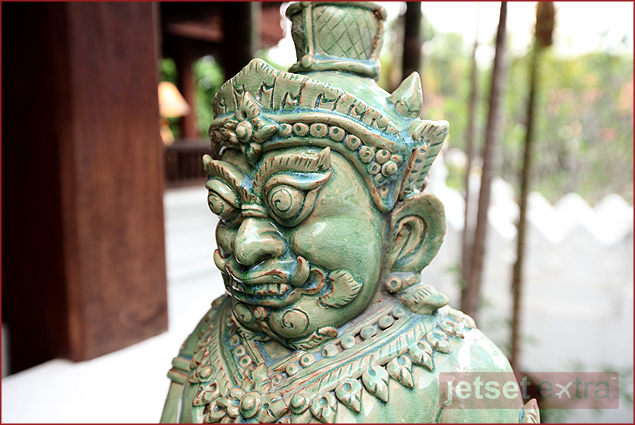 The property is also home to Suchet’s vast antique collection. His antiques are scattered throughout the resort and are easily accessible to guests. Suchet explained that he believes that antiques are something to be touched and experienced, not kept under lock and key as they would be in a museum. “We love to share [the antiques] with you,” Suchet said of his collection. 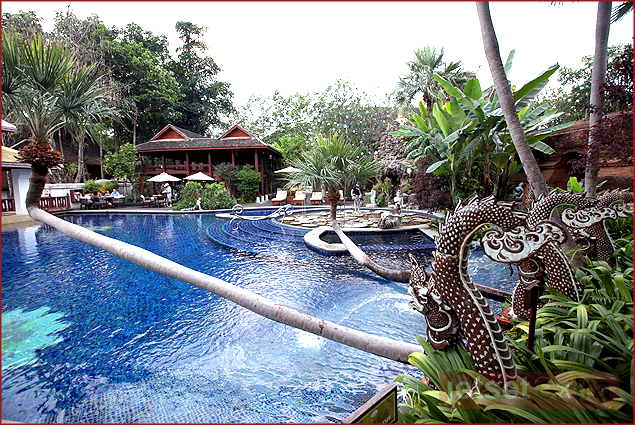 In addition to Dhara Dhevi’s ancient relics, guests can experience the Thai culture through various activities at the resort. Dhara Dhevi has its own cultural center where people can learn basket-weaving and other artisanal crafts. The resort also has its own rice paddies, where guests can dress as traditional farmers and farm their own rice while sharing the paddy with the resort’s water buffalo.

Sitting across from Suchet during the interview, it was hard to believe that this laid-back, smiling man was the sole visionary behind Dhara Dhevi. With its blue-tiled pools, cobblestone roads, and buildings reminiscent of the old Lanna era, this mini-city looks like Suchet’s attempt to leave a tangible legacy. When we asked if that was in fact his goal, he chuckled and said, “No, I just wanted to see if I could do it.”