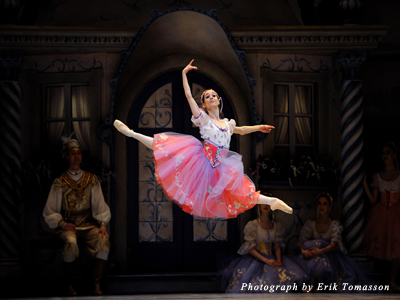 Art is magic delivered from the lie of being truth, said Theodor Adorno, a German philosopher of the last century. His earlier compatriot, E.T.A. Hoffmann delivered the eerie magic of “Der Sandmann,” and a tale of a clockwork doll, brought to life through “organ donation” of a human soul, to put it in contemporary terms.

Made famous by a Leo Delibes ballet (libretto by Charles Nuitter) choreographed by Arthur Saint-Leon almost a century and a half ago in Paris, the story had shed its original morbidity and acquired very different accents. Coppelia, one of a few light-hearted ballets, is now gloriously delivered by the San Francisco Ballet with Alexandra Danilova and George Balanchine choreography (after Marius Petipa), staged by Judith Fugate and Garielle Whittle, conducted by Martin West, with costume and set design by Roberta Guidi di Bagno, and lighting design by Randall G. Chiarelli.

Maria Kochetkova’s amazing skill and grace, her acting talent and physical beauty can hardly explain the ease with which she moves from her playful character whose very skirts have a mind of their own, into a mechanical doll, limp and rigid at the same time. How she keeps her performance so seamlessly perfect all through the excruciatingly complex second act, and comes out so sprightly in the third, cannot be explained just by the amount of work she puts into her art. It’s gotta be magic.