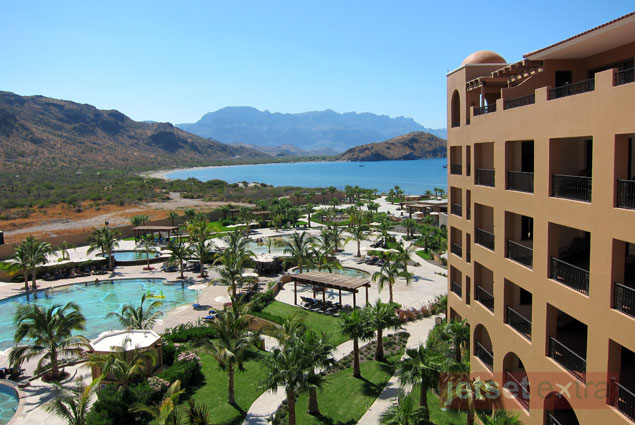 Many people, especially those of us who grew up in Southern California, are familiar with the Baja California peninsula destinations Tijuana, Ensenada, and Cabo San Lucas. I think few, however, know much about the town of Loreto in Baja California Sur. I didn’t, until I attended an event held by the Mexico Tourism Board celebrating Loreto and the new, non-stop, Los Angeles-to-Loreto route from Alaska Airlines. I admired images of sparkling blue seas, lush green landscapes, and sunny skies and wondered if I would ever have the chance to visit such a beautiful place.

Fast-forward a couple months, and there I was, gazing out the window of an Alaska Airlines propeller plane heading to the Loreto International Airport. We landed at the tiny airport, gathered our luggage, filed through customs, and piled into the van to make the short drive to our resort destination. 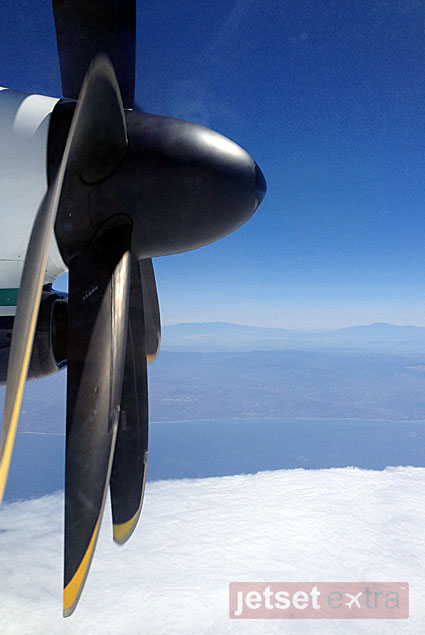 As we drove up to the Villa del Palmar at the Islands of Loreto, our fantastic host for this press trip, I marveled at how remote the resort’s location was. It reminded me of a hotel I would find in Palm Springs, with its desert surroundings and dry heat. The biggest difference, however, between a Palm Springs resort and the one I discovered here was the Sea of Cortez (also known as the Gulf of California), which provided a breathtaking backdrop as we passed through the hotel lobby and out to a patio by the pools.

Sixto Navarro, the Villa del Palmar’s general manager, gave us a warm welcome and introduced us to his staff—including the director of food and beverages, the spa manager, and the chief engineer—who all smiled and said hello as my companions and I, weary from our travels, attempted to take in as much information as possible. We were then led by our trip host (and the always stylish) Alejandra Gutiérrez Camarillo, the hotel’s social media and e-commerce manager, to the Casa Mia pool bar for a welcome meal of chips and guacamole, tacos, vegetable pizza, and chocolate clams, a popular type of shellfish in the region named for its color.

Feeling a little more energized we were released to our rooms to get acclimated and freshen up for the evening’s activities. Guestrooms at Villa del Palmar Loreto range from a single-room deluxe suite to the multi-bedroom presidential suite, which can accommodate up to 12 people. My one-bedroom suite included a fully equipped kitchen, a washer and dryer, two bathrooms, and a wraparound balcony with views of the sea—enviably much more than I would find at my apartment back in Los Angeles. I unpacked and did a little work while sitting out on the balcony before getting changed for dinner. 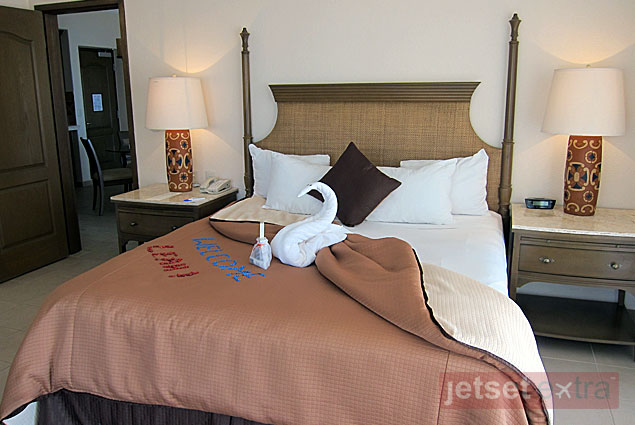 That night we dined at Danzante, one of the resort’s restaurant offerings. Executive chef Roberto Cardazzo and sous chef Edgar Santos spoiled us (as, we later learned, they planned to do with every meal we had on the property) with a multi-course feast. One of my favorite dishes of the night was traditional tortilla soup served in a decidedly untraditional way: As I watched from my seat, a server slowly poured hot, tomato-based broth over a bowl of tortilla strips, fresh avocado, cheese, and a strip of dried guajillo chili. Talk about presentation!

The culinary masterpieces kept on coming, with a delicious entrée of plantains, sea bass, and risotto, and a date tart with Serrano chili and lime sorbet for dessert. 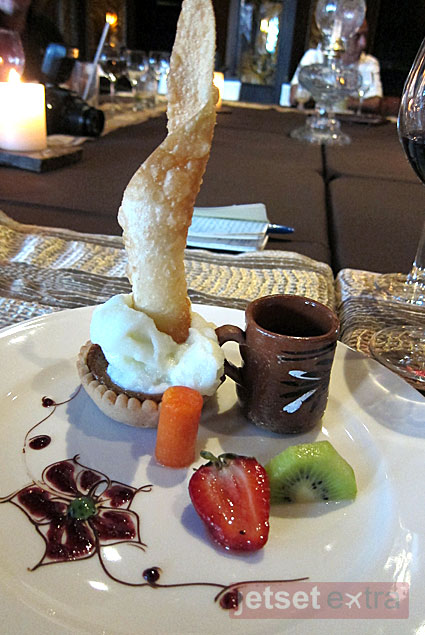 The next morning, my colleagues and I set off for a day of exploring Loreto. Led by Roberto Salazar of the tour company Wild Loreto we boarded a (thankfully air-conditioned) minibus and made our way up the Sierra de la Giganta mountain range to Mission San Javier. On the way, we stopped to view ancient cave paintings at Cuevas Pintas and learn about some of the vegetation in the region. 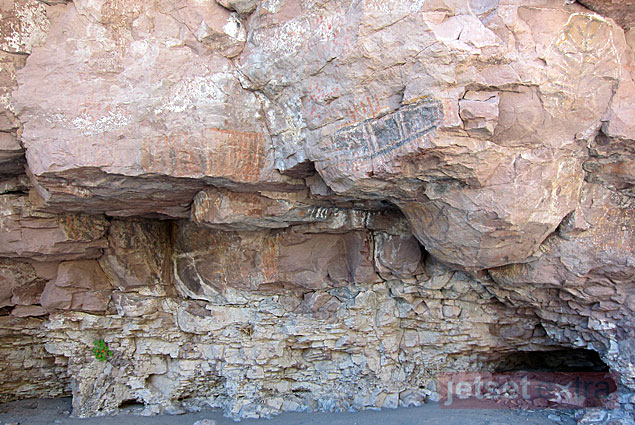 Mission San Javier is the second oldest mission in all of Baja California. It was founded in 1699, although construction of the Church of San Francisco Javier did not begin until 1744. I was amazed at how well preserved the building was; my visions of a crumbling half-wall and descriptive plaque were immediately erased as we pulled up to the towering structure and took in its beautiful baroque appearance.

A short walk behind the mission brought us to the oldest olive tree in all of the Americas and to a vineyard, both of which still bear their respective fruits. 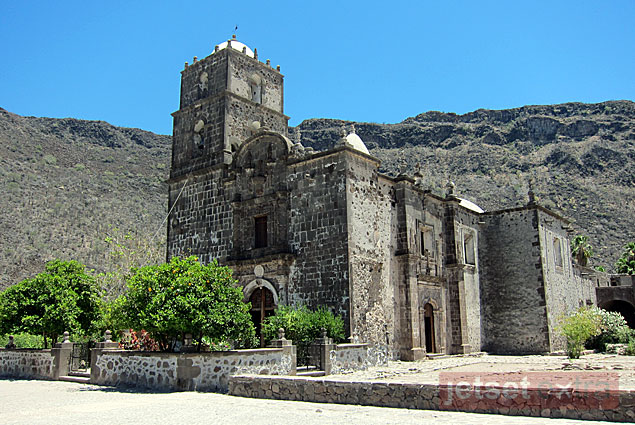 The church bells chimed as we got back on the tour bus and headed down the mountain to the town of Loreto. We walked along the marina, past a peacock coop, and into a main town square where local school children were presenting projects about ocean preservation. A tiled walkway shaded by arched trees took us to the Mission of Our Lady of Loreto, the first mission in the Baja peninsula. Founded in 1697, the structure was equally as impressive as the Mission San Javier, both in its architecture and in its ability to withstand the tests of time.

We spent the next hour drifting in and out of Loreto’s shops, picking up mementos and souvenirs, before gathering for dinner in town at a steak and seafood restaurant called Domingo’s Place. After a long and information-filled day it felt wonderful to pull up a chair on Domingo’s colorfully decorated back patio and dig into a satisfying meal. A live mariachi trio provided the evening’s entertainment.

The next day, we set out for another adventure—this time on the water. With Roberto again as our guide, we hopped aboard two boats in the Loreto marina and set off for Isla Coronado, one of five islands in the Bay of Loreto National Park. More than 800 species of marine life inhabit the Sea of Cortez, and we kept our eyes peeled for sea turtles and a bird called the Blue-footed Booby. Although no sea turtles made an appearance on this trip, we did come across quite a few sea lions sunbathing along the island’s rocks. 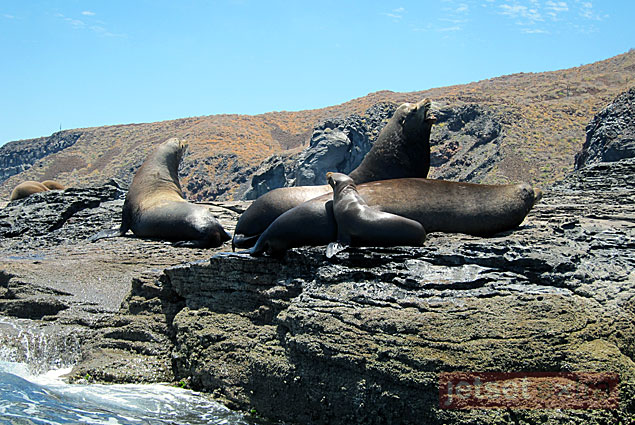 We also had an opportunity to snorkel in the area, during which Roberto pointed out starfish and other sea creatures perfect for photo ops. 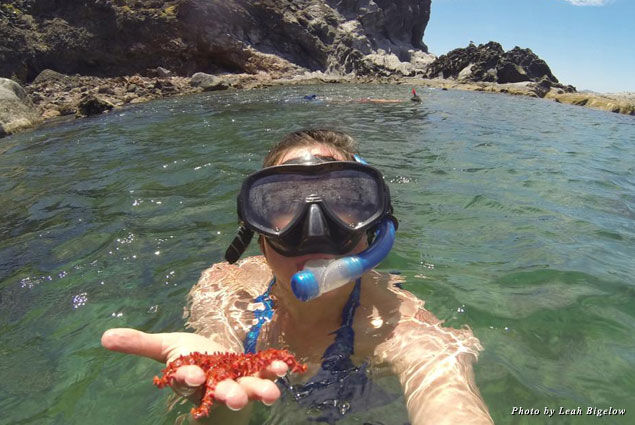 After working up an appetite during our underwater explorations, we climbed back aboard the boat and headed to a secluded beach for a picnic lunch. One of my favorite moments from the trip to Loreto was rounding a brown, rocky corner of Isla Coronado and watching the dark blue water turned shades of lighter blues and turquoise as we motored closer and closer to a white-sand beach. The beach was deserted save for a palapa and wooden table where were spread our Villa del Palmar-catered lunch and ate as we took in the serene surroundings. It was a tough spot to leave, and one I hope to come back to someday.

Back at the resort we headed straight for the Sabila Spa, where we were each treated to a head and neck massage and invited to enjoy the spa’s sauna and spa-tubs—the perfect way to relax after an exciting day.

That evening, the Villa del Palmar hosted “Mexican Night,” one of its themed events for hotel guests. We piled our dinner plates high with traditional Mexican cuisine from the Market’s buffet before settling in for the main event: a showcase of the history of music in Mexico featuring dancing performances from members of the hotel staff. The dancers were fantastic and seemed to be having so much fun sharing their culture with us. The audience was even invited to join in for a rousing rendition of the Jarabe Tapatio, also known as the Mexican Hat Dance.

On our last day in Loreto, we made one final effort to take in all the resort and destination had to offer. Members of my group met up early before breakfast for a guided hike in the hills next to the Villa del Palmar, where we took in the stunning Sea of Cortez and learned more about the other islands in the bay.

After breakfast I took the opportunity to head down to the beach for a quick paddle-boarding session. It was the perfect way to say goodbye to my surroundings, gliding through the water while taking in the beauty of the bay. How could I leave this stunning, exciting place? With the promise that, with a little help from airlines such as Alaska Air, I could come back to visit again, to do everything I didn’t have the chance to do on my first visit and relive some of my favorite moments.

Loreto, I will see you again soon.