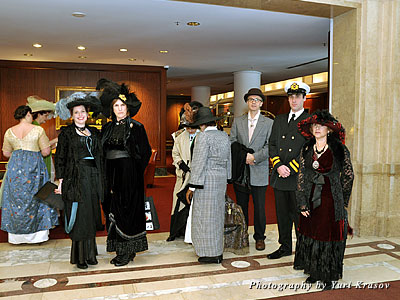 The Palace Hotel in San Francisco is a living Belle Epoque legend. Coming here for a weekend getaway or just for a gourmet lunch at the Garden Court restaurant is always a celebration – and a little bit of time travel.

I happened to stay overnight at the Palace on the centenary of the Titanic’s sinking, so I wasn’t surprised to see a group of ladies and gents in Edwardian attire in the hotel lobby who came to pay homage to the time period. 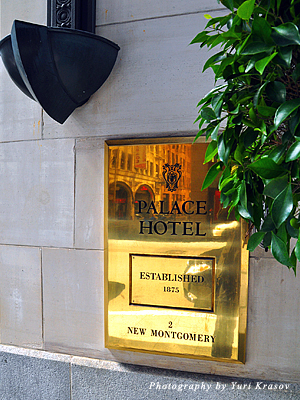 First opened in 1875, the Palace was the largest hotel in the world at the time, and throughout its long history hosted an endless list of famous guests – kings and queens, presidents and prime ministers, inventors, authors, and actors. 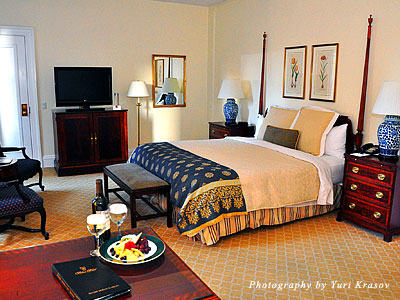 Understandably, I felt like a queen ascending the marble and wrought-iron staircase to my room with an astounding view of the San Francisco downtown. 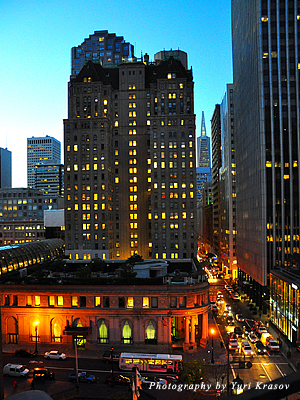 It was my weekend night, and I could have walked to Union Square for some exuberant nightlife, to the San Francisco Museum of Modern Art, or to the Yerba Buena Gardens, Theatre, and Center for the Arts, but just staying in my room with California wine and cheese and watching the busy intersection of Market and Montgomery outside my windows seemed like a very satisfactory option. 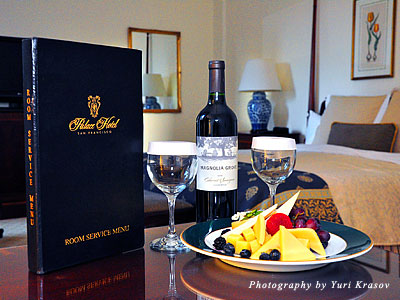 I also had an idea to explore the hotel’s fitness center with sauna and indoor swimming pool. Open 24 hours a day, the well-equipped exercise room was filled with vacationing families with children, and the pool chairs were occupied by traveling (honeymooning?) couples. A glass dome over the pool, potted tropical plants, and a side whirlpool spa created an atmosphere of relaxation and delight. 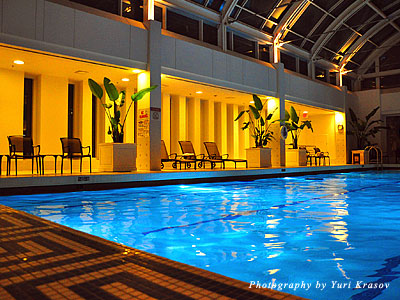 That night, I slept like a baby in a luxurious four-poster bed fit for a queen.

The best was yet to come. I knew I was in for a treat when I made my breakfast reservation at the Garden Court, which used to be the hotel’s carriage entrance 137 years ago.

After the 1906 San Francisco earthquake and fire, during the Palace’s restoration, the restaurant was built and opened in 1909 to be recognized as one of the most beautiful public spaces in the world. 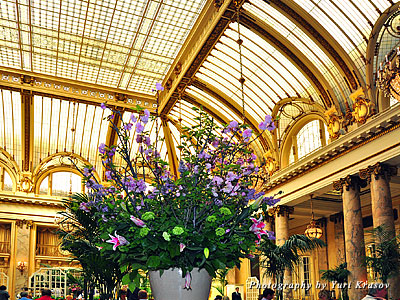 I stepped into its sunlit opulence, and felt immediately elevated to the mindset of the time period known for its elegance, rapid industrialization, and hopeful outlook despite the current and impending disasters.

Today, the Garden Court is a historic landmark. It measures 110 by 85 feet, and is crowned by the etched-glass dome with gilded beams and arches. It is supported by the Ionic columns of pink Italian marble and lit by Austrian crystal chandeliers. There is a grand piano at the center of the room, and an enormous bouquet of fresh-cut seasonal flowers greets visitors at the entrance.

The restaurant has it own history and a rich culinary tradition. For example, Palace crab salad features the signature Green Goddess dressing. It was created in 1923 by executive chef Phillip Roemer for a banquet held at the Palace in honor of actor George Arliss, who played the lead in William Archer’s hit “The Green Goddess.”

The Garden Court serves breakfast and lunch, a weekend brunch, and a Saturday-afternoon tea. Be it a traditional American steak and eggs or a plate of Belgian waffles for your most important meal of the day, just being here is pure decadence. 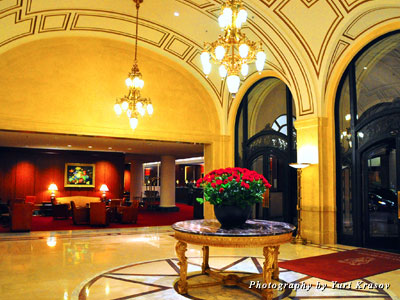 Following its modern-day renovation in 1991, the Palace Hotel received a series of design and preservation awards from organizations that include the National Trust for Historic Preservation, the American Institute of Architects, the California Preservation, and the California Heritage Council.

It offers 552 guest rooms, 53 suites, 53,000 square feet of banquet space, and 22 meeting rooms, including four ballrooms and four boardrooms to accommodate from 12 to 1,200 people.

Call (415) 546-5089 or visit their website for reservations. For information about the Garden Court and other hotel restaurants email palacerestaurants @ luxurycollection.com.