Letter From the Editor: December 2014 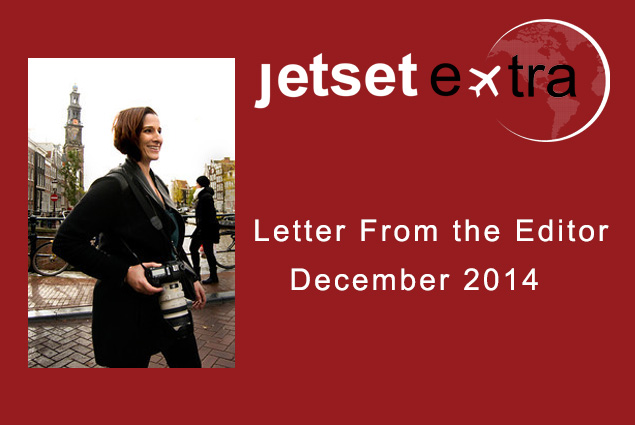 When was the last time you went on a vacation? Last year, last month, last week? Do you travel often, or are you one of many who save your money for a trip of a lifetime?

As I think about all of us who travel for a living one thing keeps nagging at me. Recently there was a campaign called #CarryonShame launched by a fellow travel professional encouraging people to snap photos of other passengers who seemed to be abusing carry-on luggage rules.

As someone who travels frequently and has become quite familiar with the rules and regulations of airlines and the TSA, I have found myself becoming frustrated with those who hold up security lines because they don’t know to take off their shoes or remove their laptops from their bags. But then I take a deep breath and think, what if this person doesn’t travel often and isn’t as familiar with the rules as I am? I’ve been the mom traveling alone with a baby and a toddler, carrying diaper bags and rolling bags and a stroller, who needs a minute to get through the line with impatient people behind her. It’s nerve wracking and makes for an even harder trip when you feel embarrassed or pressured by other passengers who are giving glaring looks of annoyance.

Personally, I don’t think travelers who propagate this #CarryonShame campaign realize who they are shaming. Not everyone is a frequent traveler; they could be a mom and dad who have saved for years to take their four kids on a vacation of a lifetime to Disneyworld or a retired couple who waited until the kids were grown to take the honeymoon they never had. They could be people who are so excited to take this trip they didn’t want to leave anything behind. Because they choose not to live out of a carry-on suitcase wearing variations of the same clothes every day, their bags are going to be bigger than the person who feels the need to shame them.

My point is, no one should be shaming anyone publicly—especially on social media—just because of someone else’s opinion about how they packed for their trip. It’s the job of the airline to tell them if their bags are too big. On almost every trip I take, my carry-on bags are filled to the brim and big because I carry all of my business paperwork and camera equipment on with me. Will you #CarryonShame me?

I encourage all of us to be a little more patient with each other and perhaps lend a hand when you see someone who needs it. Tweet me at @JetsetExtra using the hashtag #JSETravel to share your thoughts about this topic.

Letter From the Editor: December 2015

Letter From the Editor: November 2015

Letter From the Editor: October 2015