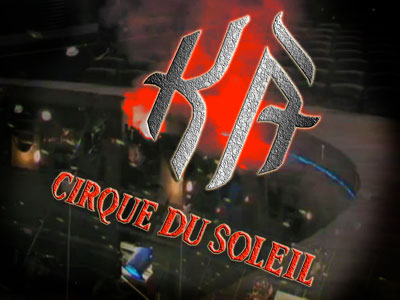 Trips to Las Vegas are designed to be memorable, right? After all, what happens there … (you get the picture!) But I was in for an eye-opening journey during a recent trip. I stayed at The Aria—tres futuristic and über eco-friendly (but more on that new Vegas gem in upcoming blogs), yet I did most of my entertaining at the MGM Grand. Specifically, I immersed myself in Cirque du Soleil’s breathtaking KA, which has its home at the lavish hotel.

KA is a fiery opera-like beast that stays with you long after you leave the theater. A rare Cirque treat, it actually has a story and characters you can become emotionally invested in. It boldly chronicles the separation of two Imperial Twins who attempt to find their way back to each other. Along the way, they encounter love and, naturally, its flip-side, danger and conflict, as they’re hunted down by a number of enemies. And that’s just the basic plot. Wanting to learn more, I went behind the scenes to see how this intricate show really works. Take a peek:

Suite, Suite Vegas at The Palazzo