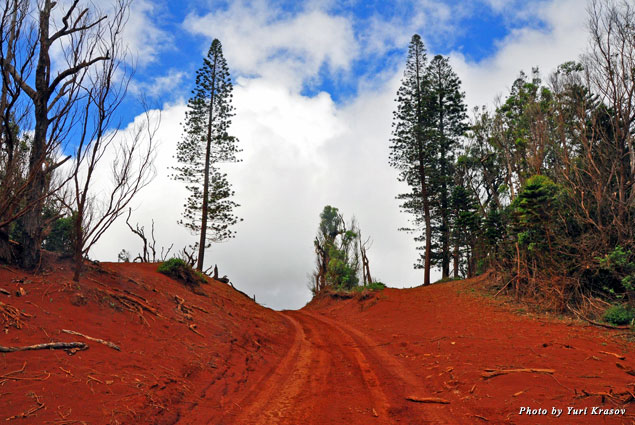 The soil on the Hawaiian island of Lanai is dry and red, just as it is (or supposed to be) on Mars. Wherever there is a forest or a green patch, the greenery is lush, with healthy species of pine, ironwood, eucalyptus, banyan, flowering shrubs, and ferns. Cook pine, purposefully planted, which retains and emits moisture and is therefore beneficial to the soil, shares the island with water-consuming Brazilian pepper tree, once brought here for its decorative “Christmas berries” and now outright invasive.

The sapphire ocean below and the azure sky above frame the crimson soil and all shades of green vegetation. Very few people can be seen in this majestic color field picture. Rush hour is characterized by two cars driving simultaneously on the same road. 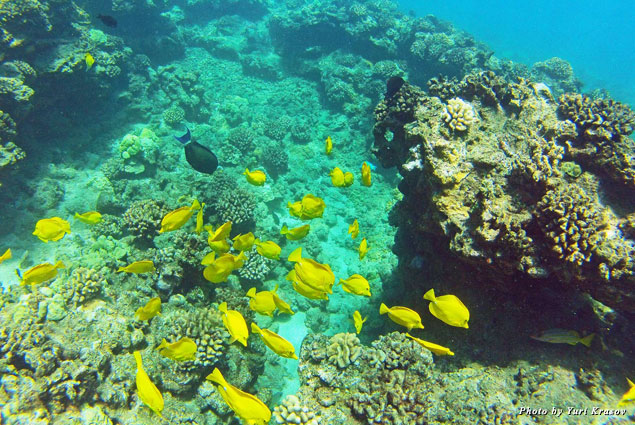 By contrast, marine life is undisturbed and abundant around the protected reef and includes everything from yellow surgeonfish to humpback whales.

While traveling on Maui, my husband and I decided to take a short side trip to the Martian island for different reasons. I wanted to experience its ultimate luxury: upscale resorts, no crowds, and being alone with nature. He was more interested in adventure sports and the hunting conditions on Lanai.

For the resident population of about 3,000 people there are 6,000 Axis deer living on the island. A few individuals of this beautiful spotted deer from India were gifted to the King Kamehameha V in the middle of the 19th century, and since then they have procreated and multiplied successfully in the absence of natural enemies. Understandably, deer hunting became rather popular among the locals and tourists alike. 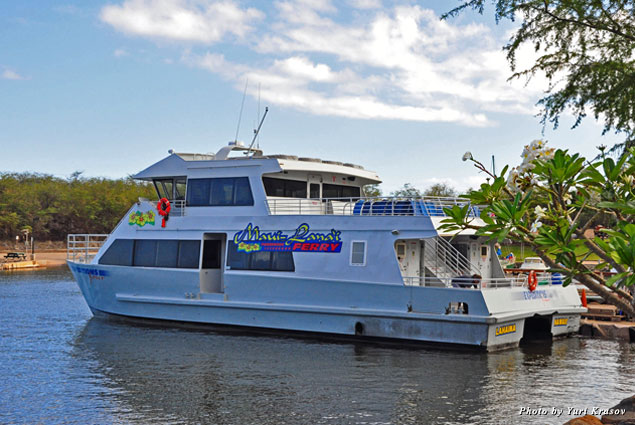 From Lāhainā Harbor we took the Expeditions Maui-Lanai Ferry, which felt more like a pleasure ride and delivered us to Mānele Harbor in 45 minutes.

Stepping off the ferry, we were greeted by a transportation concierge and received a traditional gift of kukui nut necklaces before we boarded a shuttle to the Four Seasons Resort Lanai at Mānele Bay. 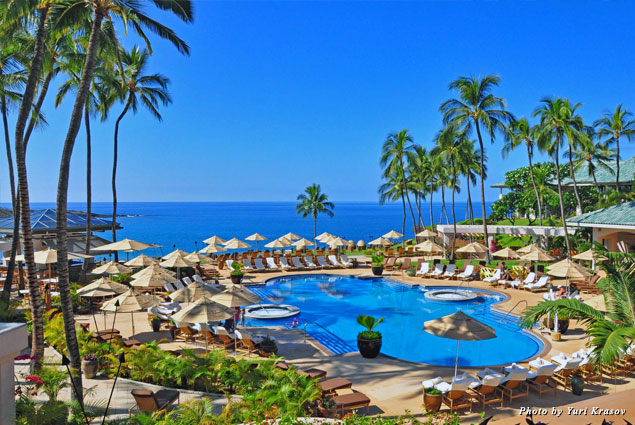 The enormous resort territory is designed as a network of whimsical gardens with bamboo and plumeria groves, clusters of orchids, koi ponds studded with lotus flowers, and shallow streams glittering in the sun. Behind a spacious oval swimming pool, surrounded by palm trees, lounge chairs, and umbrellas, a sandy beach leads to Hulopo’e Bay marine preserve, which is teeming with undisturbed schools of tropical fish.

Right after check-in we quickly unpacked in our tastefully decorated room with a balcony to the ocean and hurried to the beach to get some snorkeling done before dark. 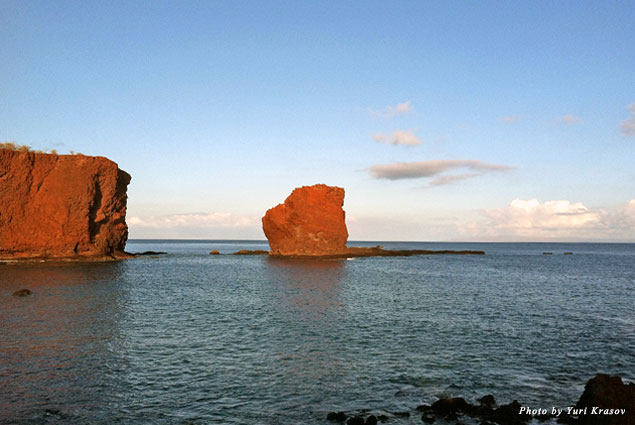 Afterward, we walked along a trail from the beach to the local site Pu’upehe, or Sweetheart Rock, rising from the water like a red sail and brilliantly scarlet in the setting sun.

The legend has it an ancient warrior hid his beloved maiden Pu’upehe from the world in a sea cave by the rock, but she drowned in his absence in the rising tide. Grief-stricken, the warrior, helped by the gods, delivered her body to the top of the rock and buried her there, then jumped into the ocean to his death.

Fortunately, the archeologists who examined the rock state there are no human remains on it, just some bird bones, but the legend about possessive love lives on, as beautiful as the Sweetheart Rock itself.

Back at the hotel, we headed to Kailani Restaurant for dinner. Signature cocktails Mānele Tai and Kailani Spritz were as sweet and refreshing as the ocean breeze on an open-air terrace enlivened with torch fire and live music. 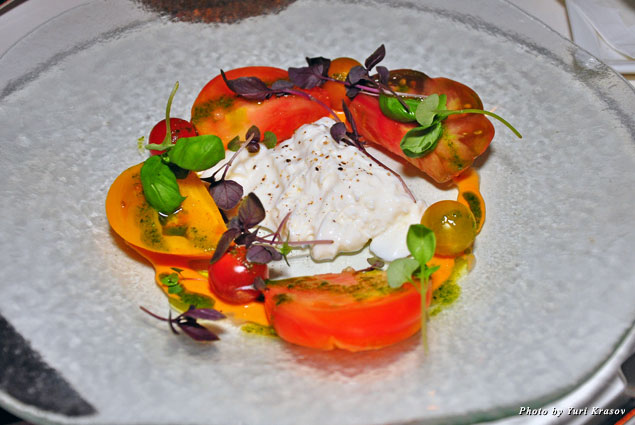 Chef Dario Montelvere’s Italian cuisine had a distinct Hawaiian accent. Caprese salad with fresh burrata and colorful heirlooms was made with Lanai-grown green and purple basil.

A creative twist on Opera cake was made with pistachio and crème fraîche mousse and decorated with plump island cherries in their own syrup.

We were awakened from a good night sleep by chirping birds and splashing waves. We rushed to the beach and took a quick plunge next to a group of hotel guests doing their sunrise yoga with an instructor, then hurried to breakfast. An ocean-view veranda of One Forty restaurant was buzzing with morning activities. 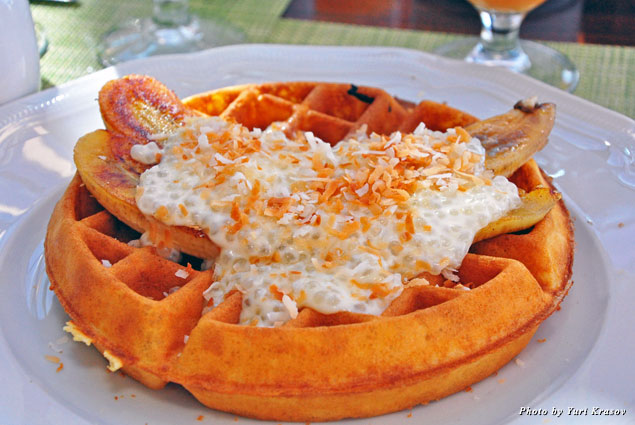 Out of a long list of breakfast specialties I chose a Hawaiian waffle, a freshly baked Belgian topped with a split caramelized banana, tapioca, and coconut shavings. I was seriously beginning to wonder if I would ever be able to go back to non-island food, deprived of my now favorite tropical flavors.

We had a big day ahead and right after breakfast went to the Stables at Ko’ele, where we started our island expedition organized by Lanai Grand Adventures. The expedition, called “Ride and Shoot,” included a ride on a UTV (utility task vehicle) and a shooting session with sporting clays.

At the stables with riding horses, a UTV garage, and a petting zoo, we began our adventure with a guide, whose job included driving through the most impassable parts of the road, supervising the clay shooting, and probably making sure his charges didn’t vanish without a trace in the dizzyingly red Martian desert. 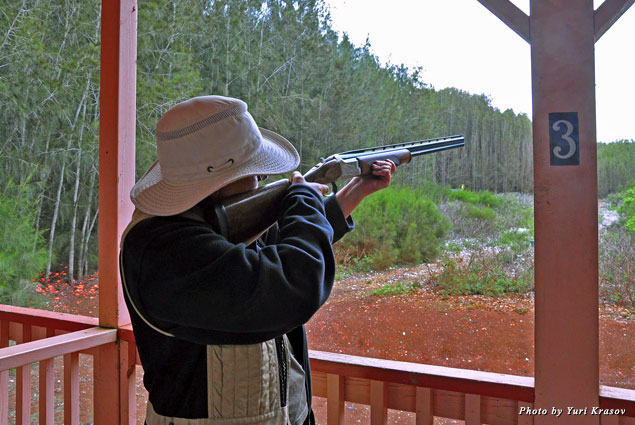 After an invigorating ride through the boulder-strewn fields and wooded hills, proud of our extreme driving abilities and covered with red dust, we reached the Lana’i Pine Sporting Clays area. While my husband was happily hitting the clays mid-flight two at a time, I carefully studied instructions, took aim, missed, and got a slap in the face from my rifle butt. I decided hunting is not my kind of sport, even with clay pigeons.

I started feeling much better as soon as we reached another luxury property, the Four Seasons Resort Lanai, the Lodge at Koele, where we stopped for lunch.

A century-old banyan tree, still blossoming with purple flowers, grows by the entrance to a graceful historical manor—the largest wooden structure in the state. The manor is surrounded by soaring Cook pines, serene lawns with tinkling fountains, garden furniture, koi ponds, pagodas, and a hot house filled with orchids.

I could’ve spent many hours in this enchanting place, but we had to get ready for our comprehensive island excursion with Rabaca’s Limousine Service.

Our experienced tour guide, Hawaii-born Bruce Harvey, began his narrative in Lanai City, where the majority of the population resides since the Dole Plantation days that gave the Pineapple Island its nickname. We visited the Lanai Culture and Heritage Center, where the past is lovingly preserved and conveyed in a number of fun and educational displays. The center tirelessly collects historical artifacts and documents to share the history of Lanai with its dwellers and guests. Archeological finds, native flora and fauna samples, and plantation-era memorabilia donated by the local families comprise the precious museum collection. 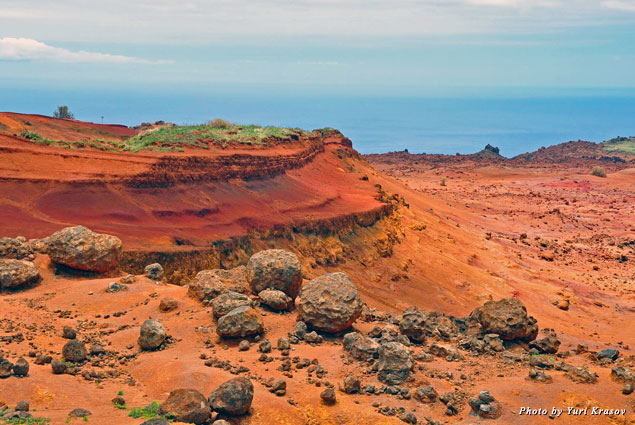 We took a drive to Keahiakawelo, or Garden of the Gods, a fantastical assemblage of volcanic rocks scorched by ancient eruptions. The windswept austere red and ochre landscape was studded with scattered boulders, obviously thrown down by the gods from the powder-blue sky.

Our tour guide also showed us Kaiolohia, or Shipwreck Beach, along the Kalohi Channel between Lanai and Molokai. A vessel built in the 1940s stranded on the coral reef and grounded here by the Navy gave this wild place its name, but the most interesting thing on the beach to me was the growth of kauna’oa, the official island flower of Lanai, with its rounded green leaves and tangle of pliable orange vines holding tiny clusters of white snowdrop-like blossoms.

For the night, we settled at the Hotel Lanai in the center of the city, a charming plantation house built in 1923 for James Dole. While walking past palms and ti plants and ascending its wooden porch in my dust-covered road clothes I felt just like one of Mr. Dole’s guests, entering not only his house but also his historical time frame.

It seems in the last 90 years very little has changed in this 10-room cottage with bamboo curtains and reed rugs. Antique furniture and photo displays in the lobby, quiet country-style room décor, and a quaint Lanai City Grill restaurant create a feel of a long-gone era.

The restaurant—with its excellent bar, menu designed by Hawaiian regional cuisine chef Bev Gannon, and live music—is popular with the locals and much appreciated by the hotel guests.

After a day of touring and exploration, we happily devoured the Lanai City Grill’s offerings, including Lanai Roll sushi, made with crabmeat, ahi tuna, and tobiko. Pecan-crusted fresh catch of the day happened to be mahi-mahi, and it was wonderfully spiced up with chipotle honey butter and chorizo mashed potato. We couldn’t have missed a chance to indulge in Lanai’s favorite protein: venison, cooked medium-rare and garnished with mushroom risotto and dried figs and cherries in Port wine reduction.

Leaving the hospitable red isle, I brought home a souvenir from the Lanai Art Center. It was a community-composed cookbook called “Lanai’s Melting Pot” that reflected the island’s diverse cultures. One recipe in it especially appealed to me and proved easy to prepare: Pineapple Kugel. To make it yourself, you’ll need one pound of cooked wide egg noodles, four eggs, one cup of sugar, one teaspoon of salt, one large can of crushed pineapple, half a teaspoon of vanilla, eight ounces of cottage cheese, eight ounces of sour cream, and one-quarter of melted butter. Mix all ingredients with noodles, put in a greased 9-by-13-inch pan, and bake at 350 degrees for one hour.