La Paz, BCS, Mexico: A Few of My Favorite Things 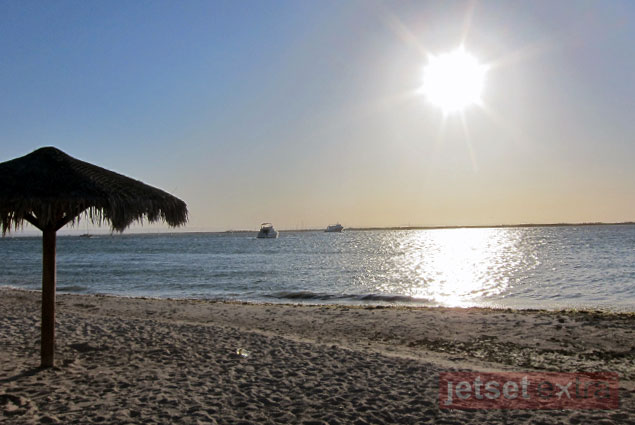 I have been to Mexico only a handful of times, each as part of a group where we stuck mainly to our resort hotel and to the common tourist spots. That’s certainly nothing to complain about, but it wasn’t until my recent trip to La Paz, the capital city of Baja California Sur, I actually realized what I had been missing: a feel for everyday life in that town and an opportunity to really interact with the locals.

Located on a section of Baja that juts out into the Sea of Cortez, the heart of La Paz is located on the three-mile-long stretch of Malecon Road, where visitors and locals alike flock to restaurants, bars, shops, and strolls along the boardwalk (known as the malecón). My fellow journalists and I had the pleasure of experiencing this area several times during our stay, which gave us a welcome occasion to see La Paz as a local would. Best of all, we felt perfectly safe doing so, a common concern when traveling to Mexico and one I was happy to see was not the case in this section of the city.

Here’s what else I loved about visiting La Paz:

1. Taking the Non-Stop Flight from Los Angeles to La Paz

I was part of a group of journalists, travel agents, and vacationers aboard Aeromexico’s inaugural flight from Los Angeles to La Paz. Now flying from Los Angeles International Airport twice a week, on Thursdays and Sundays, the two-and-a-half-hour flight is an easy way to get away from the hustle and bustle of the city and head straight to paradise. 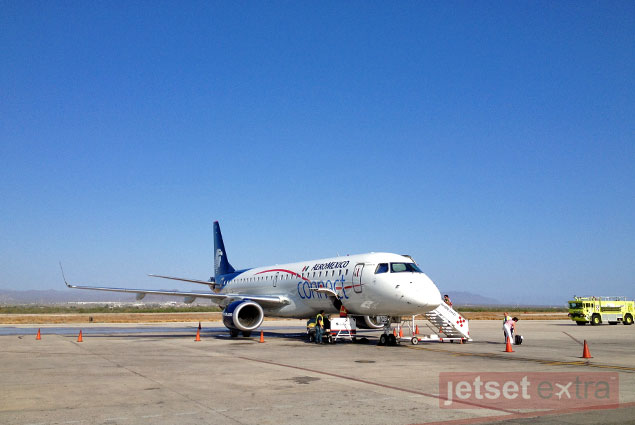 2. Snorkeling With Sea Lions in the Sea of Cortez

On our first full day in La Paz, we hopped aboard a Fun Baja boat with our fantastic guide, Juan Beltran, to explore the Sea of Cortez. Juan pointed out the Blue-footed Boobies and Great Blue Herons as we passed craggy islands and came upon Los Islotos, an island full of sea lions basking in the sun. We circled the island in our boat then donned our snorkeling gear and splashed into the water. Juan explained that, while the sea lions where comfortable having humans in their natural habitat, we were there during baby season so the males would be especially protective of their young. We watched as a giant male sea lion dove into the water and swam a line between us and his family and friends; that line, Juan explained, was one we could not cross in order to keep the peace.

Although we couldn’t get too up close and personal with the sea lions, it was incredible to be as close as we were and observe them both above and below water. At one point, Juan led us into a cave where, as we were on our way back out, a young sea lion swam right under our feet—followed closely by his watchful father. The young line made a loop at the end of the cave and swam right back out; he obviously wasn’t afraid of us and wanted to have a little fun. 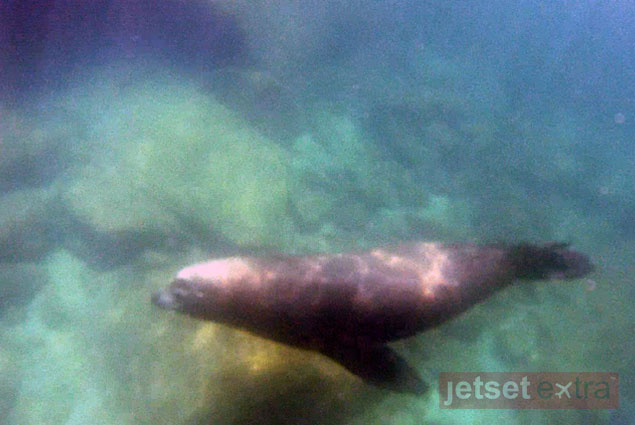 After re-boarding our boat, we headed to Ensenada Grande beach on Isla Partida in Espíritu Santos for lunch, lounging, and water activities. Fun Baja offers day trips and overnight stays on this beach (among other awesome trips), and Juan took us on a tour of the camping tents, showers/bathroom area, dining area, and kitchen. I was impressed with the camping tents, which come complete with cots, sleeping bags, pillows, sheets, a light, and a cabinet for storing smaller items, and with the modernized restroom facilities. Juan told us guests are asked to limit shower time in order to conserve water and are given use of biodegradable shampoo and soap. Chef Salvador helms the kitchen on the island, serving fresh fish and vegetables brought over from La Paz daily to guests seated at tables and chairs made of dried cactus. Fun Baja does an amazing job keeping this beach as clean and close to its natural state as possible, while still allowing people to enjoy its beauty.

Of course as a bit of a paddle-boarding enthusiast, what I was most excited about was taking one of the available paddle boards out on the water. It was so peaceful gliding out into the bay and just taking a moment to soak in my surroundings. As I made my way back to the beach a heavy breeze picked up, which caused my board to spin 180 degrees and begin moving back out to sea. I took it as a sign to mean it wasn’t yet time for me to go back to reality; I needed to enjoy this time a little longer. 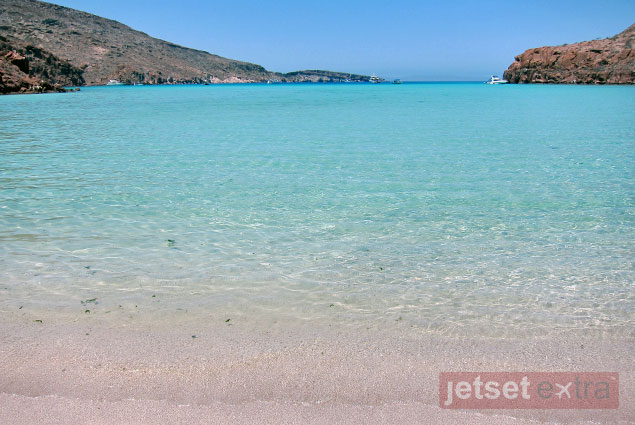 After a delicious dinner at Las Tres Virgenes in La Paz later that evening, three members of our group decided to find a place to go salsa dancing. We made our way along the malécon with a La Paz local we had met earlier in the evening, walking until we ran right into a fun-looking place called Stella. The music we heard coming from inside sounded pretty good so we decided to take a chance—thank goodness we did. A live band with a fantastic female lead singer rocked traditional Mexican banda and cumbia tunes as dancers moved around the floor.

Since our group consisted of one guy and three girls, the guy graciously took each one of us out for a spin. I was both excited and nervous since I fell in love with salsa while in college but hadn’t had an opportunity to practice it in ages. I ended up having an incredible time. Not only was our group of three Americans perfectly welcome in this locals-only joint, but some of the other men in the bar came up and asked the girls in our party to dance. It didn’t matter we weren’t professionals or even very good, we were there to enjoy ourselves and the local patrons were, too. 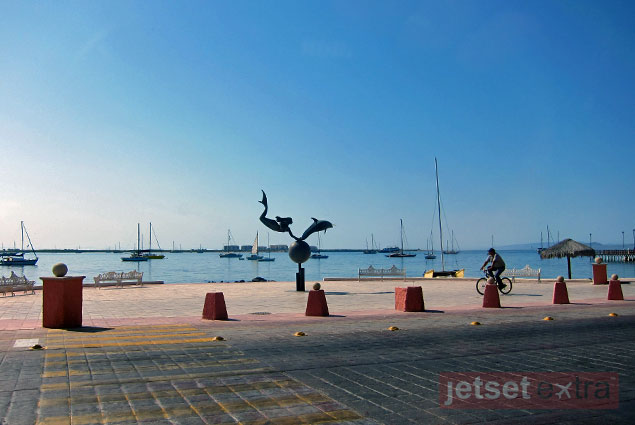 Founded in 1733 with the establishment of the Mission of Santa Rosa de Todos Santos, the village is now a haven for foreign and local artists. Todos Santos is known for its arts and music festivals, which are celebrated throughout the year.

Another big draw in Todos Santos is the Hotel California—no, not that Hotel California, but the hotel and its on-site restaurant have nevertheless adopted the Eagles’ hit song and play it often. We had a delicious, leisurely lunch on the patio of La Coronela Restaurant & Bar at the Hotel California, filling ourselves with tostadas, chili relleno, and fish tacos as a musician played soothing songs on his guitar. Adjacent to the restaurant is the Emporio Gallery & Store, where many of us stocked up on souvenirs. 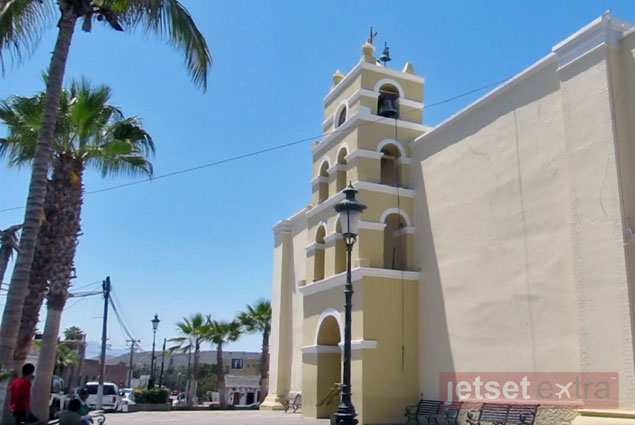 A boutique hotel so new it wasn’t even open to the public when our media group stopped by for dinner and a tour, La Posada consists of 24 guestrooms, of which 16 are duplexes with a second-floor balcony and a hot tub. The property also features a two-level bar, a gym, a spa, a ballroom for weddings and other large parties, and a two-star Michelin chef leading its kitchen. I was most impressed with the view from one of the duplex’s second-floor balconies, which overlooks not only a beautiful pool but also the sea beyond. 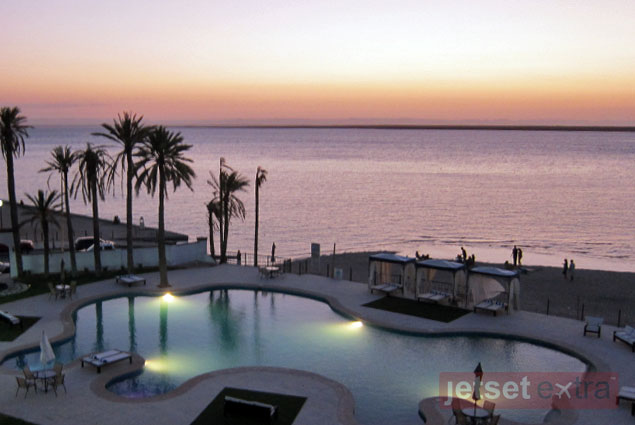 7. Enjoying the View at the Beach Club at CostaBaja Resort

While I definitely enjoyed the accommodations, service, restaurants, and views at the CostaBaja Resort & Spa, my favorite part about the hotel was its Beach Club. Although I only discovered it on the last day of my trip (the Beach Club is set away from the main part of the resort), I had a lovely time dipping my toes in the infinity pool and gazing out onto the Sea of Cortez. The Beach Club Bar & Grill keeps tummies full with a menu of fresh seafood, grilled items, and bar food and the vacation vibe flowing with a selection of cocktails. Guests can also relax in the shade under palapas or in leaf-shaped lounges set right in the pool, as well as take a kayak out to the surrounding marinas, stroll along the beach, or rent snorkeling and stand-up paddle boarding equipment. As someone whose idea of perfection consists of lounging by the pool with a good book in one hand and a fruity drink in the other, I wish I had more time to enjoy all the Beach Club had to offer. 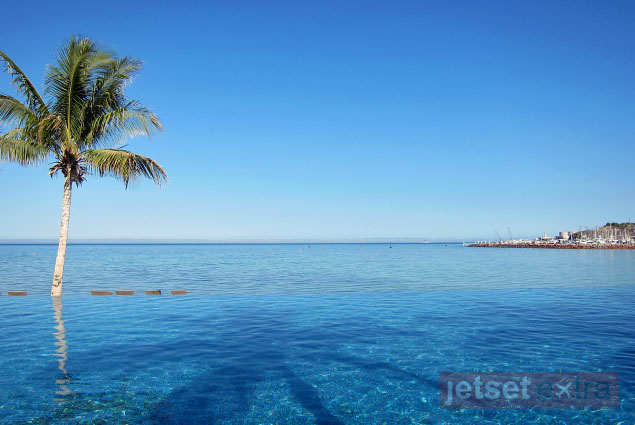 If you’re looking for a town with a laid-back, beach-y vibe and tons of opportunity for adventure, La Paz is definitely the place to go.