Kayaking With Sharks in Palau 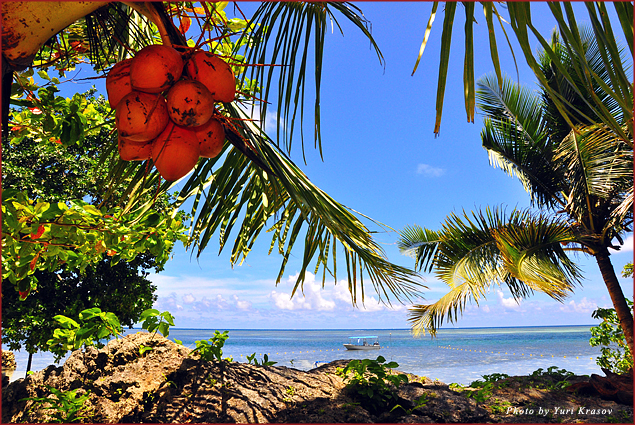 Blacktips and whitetips are the most common reef sharks in the waters of Palau – a Micronesian archipelago of 586 islands with 20,000 human inhabitants, 1,500 species of fish, and 700 species of coral and anemone.

Kayaking in the shallow sunny shark nursery with Sam’s Tours – a local water activities operator – it’s not easy to spot a foot-long beige baby shark speedily gliding through the blades of seaweed.

“Look, look, here, here!” scream excited kayakers, pointing to the beige sandy bottom, always too late for others to see the precious baby.

Sharks, whales, dolphins, jelly fish, thriving corals, and various other marine creatures, big and small, are protected by law in Palau, which has the toughest shark-protection legislation and is the first officially recognized shark sanctuary in the world. The Federated States of Micronesia are currently creating the largest shark preservation zone in the western Pacific, covering more than two million square miles. 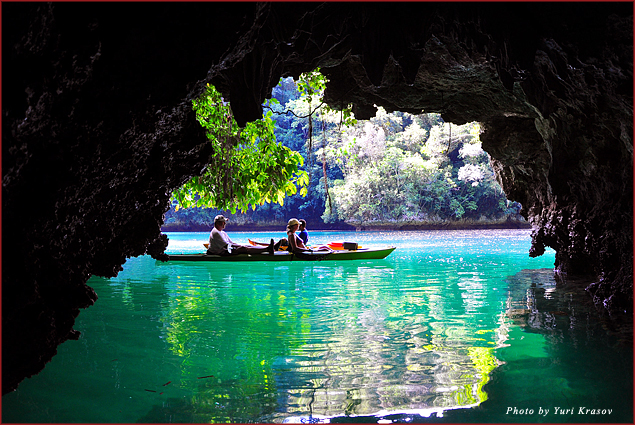 Oh, the things you will see on a Sam’s Tours’ guided kayak excursion! The trademark Palauan Rock Islands from underneath, while riding literally under the edge of a limestone rock covered with mangrove trees; narrow passages leading to turquoise lagoons; dark caves and sunlit basins, and – fresh oysters, anyone?

There are other things to see on a tour. During WWII, Palau was a major Japanese military base. On March 30th and 31st, 1944, US Navy bombers and fighter planes raided the Japanese fleet and sank more than 60 ships and seaplanes in the area. Palau is the resting place for the “Japanese Lost Fleet of the Rock Islands.” 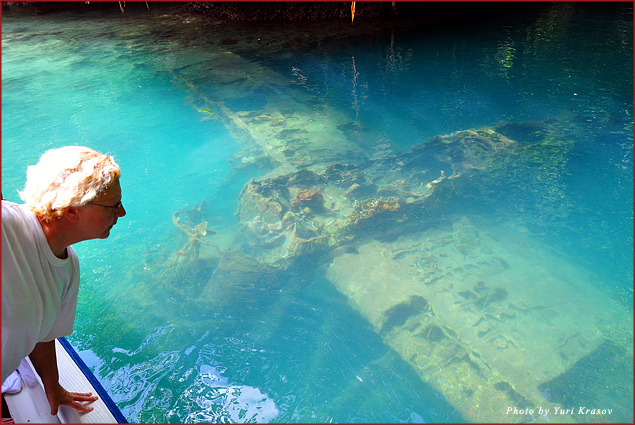 A Japanese seaplane buried underwater was on our way when we took a boat back to the shop in Malakal Harbor in Koror – the capital and the most populated state of Palau.

Airai Water Paradise Hotel and Spa is located in a historic building with rich woodwork, a restaurant that serves local cuisine, some alleged resident ghosts, and a great view from every balcony. 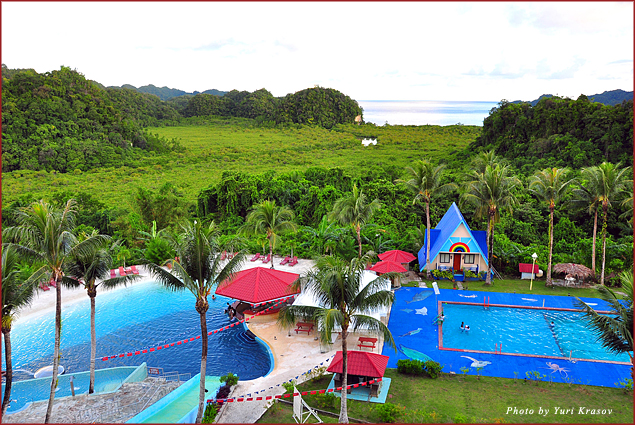 After a day of kayaking, it was nice to land in a clean room with a pink bed canopy, and to indulge in a buffet dinner featuring local delicacies made of taro root, yams, and coconut.

The new full-service Ngellil Nature Island Resort, only accessible by boat, boasts an eight-room guest house inspired by the traditional “bai” architecture, and outdoor dining gazebos where fresh local fare is served right off the grill. 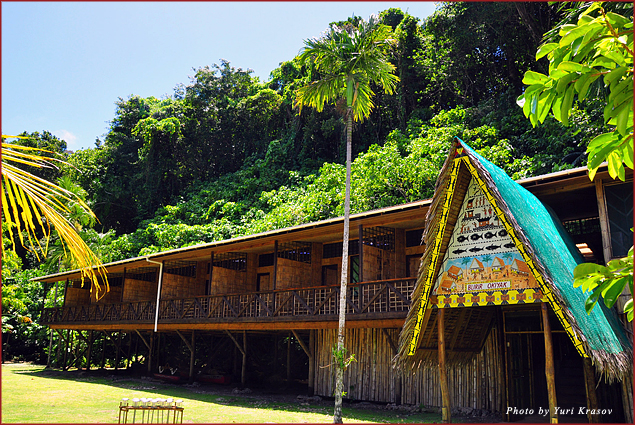 It also has a shell-ridden private beach from where you can walk to your boat if the tide is too low for it to come closer and get you.

Excursions provided by the Ngellil are many, and can take you to the rocky uphill trails through the lush jungle to see its many hidden treasures. 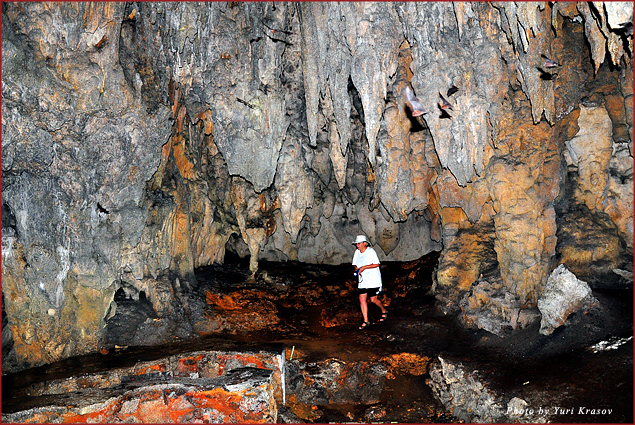 One of them is the Bat Cave, an ancient limestone formation with fantastic stalactites and stalagmites, dark indentations, dripping water, slippery floors, and other attributes of a horror movie. An entire nation of harmless and endlessly fascinating creatures clings to its crevices, and erratically flies around spooked by our flashlights. 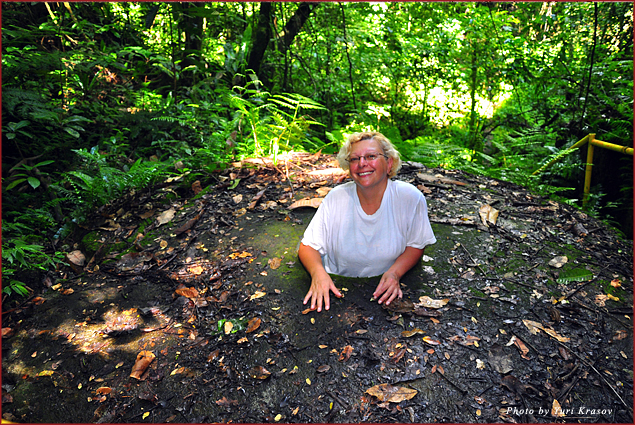 Another treasure of the jungle is Yap Stone Money, quarried from Palau’s limestone. The money is huge, round, weighs a ton, and cannot be transferred even by its owner.

A medium-size person can comfortably fit inside the holes in the center of this currency – in some explicit “We’re in the Money” fashion. This kind of money was not supposed to change hands, or at least not often. The stone money was used to decorate rich citizens’ front yards for all the neighbors to see and respect the power it provided. 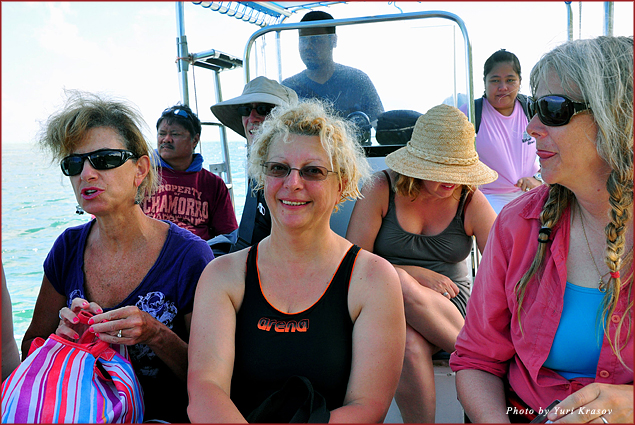 No matter what’s your adventure in Palau, be it scuba diving, snorkeling, kayaking, or boat-assisted dry-land excursions into the jungle, every great day in Palau is usually a bad hair day. But who would remember that? For more information about Palau, visit the Palau Visitors Authority.

Fishing for Local Food, Fruit, and Betel Nut in Palau