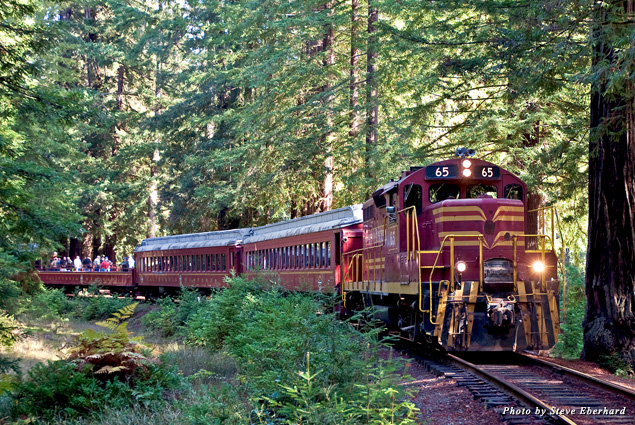 You’ve heard of “real food” and “real simple,” but to get to what I call a “real town,” try Fort Bragg on the Mendocino Coast. To discover the roots of this lumbering town, we boarded the Skunk Train with families and wide-eyed kids and time traveled back to Fort Bragg’s logging days, when the gold of this coast came from magnificent stands of redwood. The Skunk Train clickety-clacks 21 miles along the Noyo River through tunnels and mostly second-growth redwoods into the history of the days when lumberjacks were kings of the redwood forests. 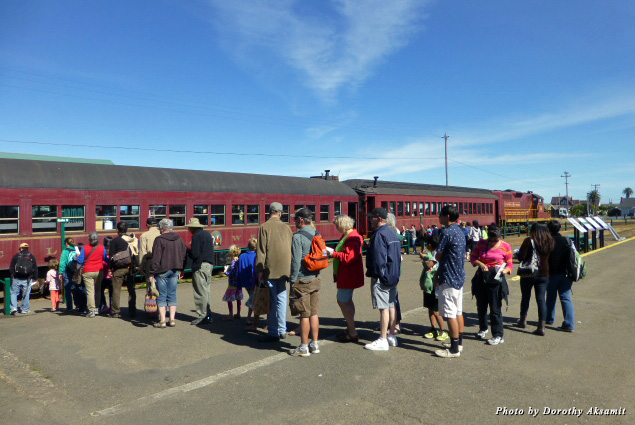 Conductor Dennis Balass gave an engaging history of the building of the railway and the logging operations on the way to Northspur, our destination and the halfway station to the end of the line at Willits. Dennis alerted passengers to old-growth redwood stumps and to stands of trees that were several hundred years old. He pointed out a small cabin beside the tracks that had once housed eight brave lumberjacks. These strong men, armed with only an ax, felled 2,000-year-old redwood trees weighing 250 tons each. The lumber from one tree was enough to build 20 houses and was widely used during the Gold Rush era and later to rebuild after the 1906 San Francisco earthquake. 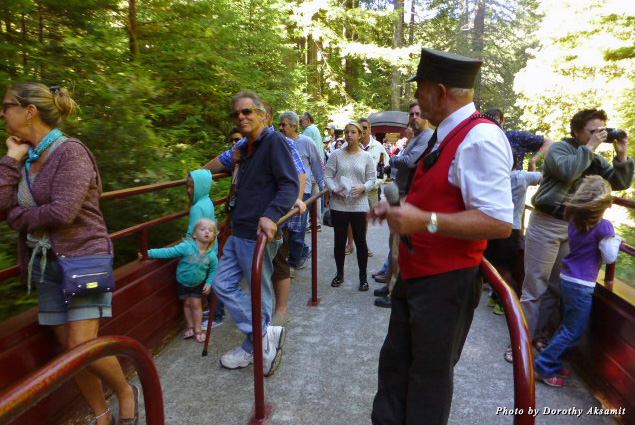 Dennis was careful to shoo everyone from the observation car to the snack car before entering the dark tunnels built by Chinese laborers. The snack car was fully stocked with chips, beer, and wine, and all the kids bought either popcorn or a hot dog. 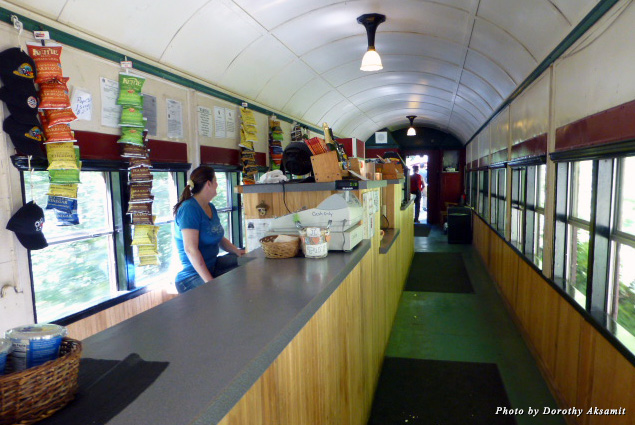 The train made a few unscheduled stops, and this was a most interesting part of the journey. The “Skunk,” named for its first smelly fuels, is not only a tourist train but also serves camps, including the Boy Scout Camp and the Boys and Girls Club of San Francisco as well as overnight campers. It also serves residents who commute to homes that have been in the family since 1867, when the Mendocino Indian Reservation was shut down and land was sold for a dollar an acre. 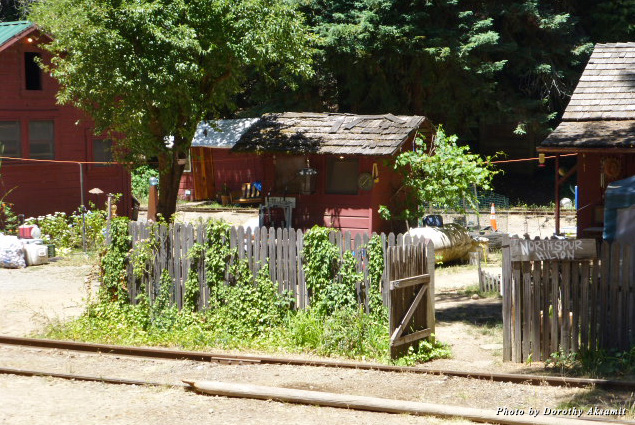 Quirky Northspur, home of the Northspur Hilton, is the perfect place to relax under the filtered light of a redwood grove for about 45 minutes before the ride home. Locals serve up hamburgers, hot dogs, chili, and other picnic fare to those passengers who didn’t bring their own.

The return trip to Fort Bragg was filled with the sing-along songs of Greg Schindel, who has been entertaining passengers with his guitar, harmonica, and whistle since 1988. 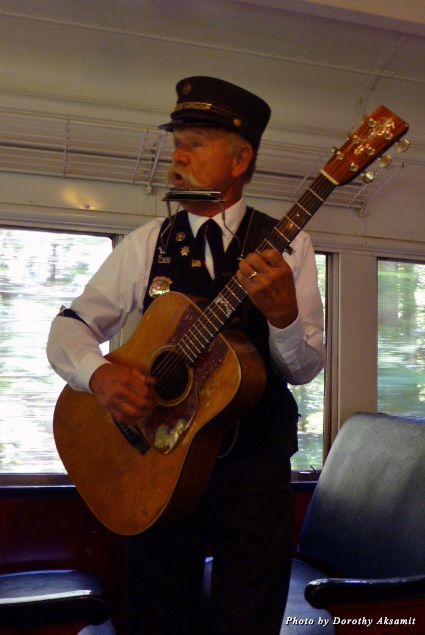 Back in Fort Bragg, we crossed the tracks to see the Mendocino Coast Model Railroad and Navigation Company. This is a labor of love by a group of self-styled “old geezers” who are determined to preserve the memory of the loggers and railways that existed at every river between Gualala and Westport along the Mendocino Coast between 1850 and 1940. Who could resist model trains loaded with lumber zipping around tracks, over bridges, and through tunnels? Granddad better have a firm grip on his wallet when he goes back to the Skunk Train lobby filled with model train kits. 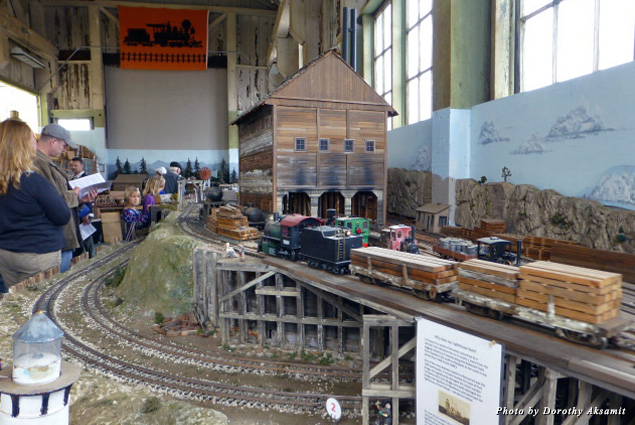 We had dinner that night just a block from the train station at Mendo Bistro on the second floor of the Company Store. To get to Mendo Bistro, enter through the double doors of the swish, dimly lit, and appropriately named, Barbelow. If you want a well drink stop and drink it here, as Mendo Bistro’s license permits only beer and wine.

Passing through Barbelow we followed the redwood stairs to Mendo Bistro, once the mezzanine of the Company Store where furniture and floor coverings were sold. Chef Nicholas Petti greeted us at the top of the stairs and told us the redwood structure was built after the San Francisco earthquake and the architect also designed the Fairmont Hotel in San Francisco. The Company Store, built by the Union Lumber Company, had stocked everything locals would need in this remote outpost that supplied the lumber for the rebuilding of San Francisco after the 1906 earthquake. 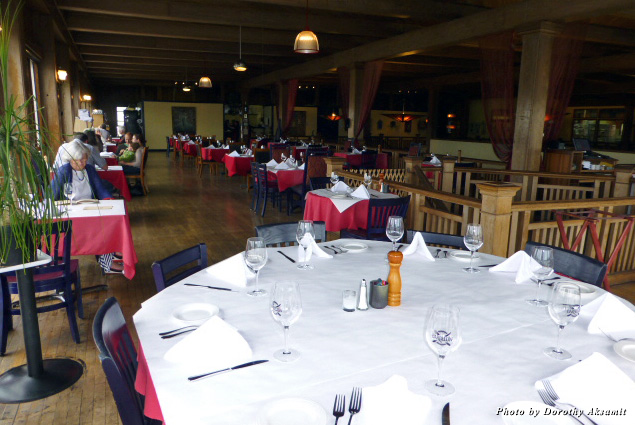 Chef Petti wears many hats; in addition to being chef/owner of Mendo Bistro and a culinary arts instructor at Mendocino College, he is also the beloved magician “Niko Mumblemore” to local children. 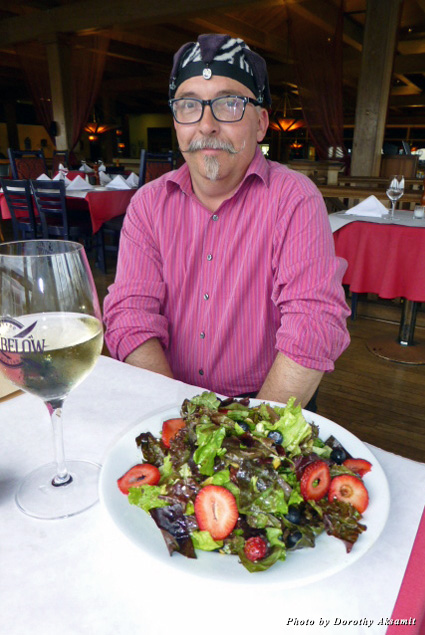 We were seated at a table with butcher paper “cloth,” and scribbling was encouraged. Heidi, our server, gave us the wine list featuring local wines with pours of three or six ounces. The menu featured an equal number of steak and seafood entrées as well as house-made pasta.

My travel companion, Jackie, ordered a warm spinach salad with Gorgonzola cheese, sundried tomatoes, spiced pecans, and sherry vinaigrette; it was garden-fresh with a nice balance of soft and crunch, sweet and tart. Her Niman Ranch leg of lamb with caramelized fennel and wheat berries paired with an Alder Springs Row Five Pinot Noir was an interesting combo she said she would go back for.

My green salad was a spring garden abloom with strawberries, blueberries, almonds, Gorgonzola, and basil vinaigrette. It was as good as it looked and was followed by a sautéed local black cod with spring onion pancake, charred asparagus, and a nice burst of flavor in the soy caviar.

For dessert, Jackie couldn’t resist the whimsical retro riff of a root beer float; she was as happy as a kid. I ordered the Meyer lemon meringue tart. When it arrived, it took a moment to realize I didn’t have to deconstruct it. This was a great idea as I got to choose how much slightly sweet meringue was needed to compliment the tangy lemon filling. Crust can be a problem because it’s sometimes soggy, but the separate cookie-like crust solved the dilemma.

As soon as we had finished, I wanted to start over with grilled baby artichokes, purple potato salad with saffron aioli, and risotto with beet, feta, and pea shoots. What a delightful north coast surprise! Mendo Bistro is a creative destination restaurant serving locally sourced ingredients touched with chef Petti’s magic wand.

We had only a day to explore Fort Bragg, but we’ll be back for a tour of the Botanical Gardens, the Guest House Museum, and the working harbor crowded with fishing boats and crab shacks. I also plan to do some serious shopping; Fort Bragg is still a real town with 10 thrift shops.