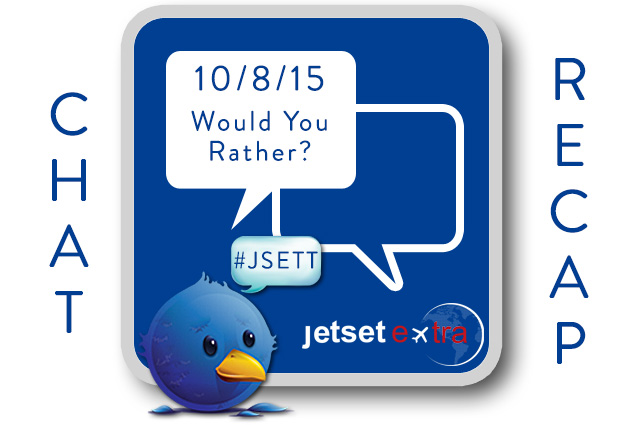 For last week’s #JSETT chat, we played a travel edition of “Would You Rather…?” We gave participants six either/or options relating to a certain type of travel—extreme weather conditions, questionable cuisine, adrenaline-pumping adventure, etc.—and asked which ones they would choose. The answers were as enthusiastic as they were varied! Keep reading to see how people responded:

Q1: Would you rather: spend the night in a Scandinavian ice hotel OR go hiking in Death Valley?

@JetsetExtra A1 I’d rather spend the night in a ice hotel. I melt in the heat. #JSETT

A1 EASY… Peasy! Hike in 150 degrees… I hate HATE the cold even tho I would visit the Ice Hotel for a Vodka or FIVE. #JSETT #Travel

@JetsetExtra A1 Oh definitely Scandinavian ice hotel! This is a must! Let’s go! #JSETT

Q2: Would you rather: walk across China’s glass-bottomed suspension bridge OR take a Caribbean submarine tour?

A2: Submarine! I’m so curious about what’s deep in the sea…like “missing planes” and mermaids and whatnot.. #JSETT pic.twitter.com/o7ALxEt0G5

A2 The Submarine for sure! I’m not down with those glass platforms I get major anxiety. #JSETT @JetsetExtra

@JetsetExtra A2 Walk across the glass bridge. I love my bridges. #JSETT

Q3: Would you rather: try some haggis (sheep bits cooked in sheep stomach) OR eat a Cambodian fried spider?

@JetsetExtra A3: As I’m terrified of spiders, I’ll definitely go with the haggis. I don’t even want a dead spider near me! #JSETT

A3: UGH I’ve had haggis…not a fan at all! Literally my saying is “Try everything twice…except haggis” Bring on the spider! #jsett

A3. Spider, esp. if that means a trip to Cambodia. @JetsetExtra #jsett

A3 eat haggis. I’ve already tried haggis but spiders I just can’t. All the Halloween spider decorations are freaking me out! #JSETT

@JetsetExtra I’m sorry, I’m on a submarine in the #Caribbean so cannot hear you talking about eating spiders and such, lalala… #JSETT

Q4: Would you rather: drive a race car at one of the U.S.’s top speedways OR go mountain biking in Whistler?

@JetsetExtra A4. Race car!!! And we live about 10 miles from Las Vegas Motor Speedway! #JSETT

A4 Easy: mountain biking in #Whistler, which I’d love 2 visit. I can’t even drive a go-kart fast anyway! #JSETT https://t.co/MvsIH9oPdh

A4 Drive a race car at one of the U.S.’s top speedways! Mountain biking and I don’t really get along too well… #JSETT

@JetsetExtra A4. Mountain biking in Whistler for sure! With a picnic and amazing views at the end. #JSETT

Q5: Would you rather: book a Virgin Galactic ticket to outer space OR travel on a cruise ship to Antarctica?

@JetsetExtra A5 That’s an easy one, #Antarctica is my one big bucket list dream destination. Space, not so much. #JSETT

A5: ANTARCTICA !!! Then again I’m in “get to the 7th continent” mode…space would probably be way ‘cooler’ ha #jsett

A5 Antarctica to visit my final continent. I love space but just saw #TheMartian and realized I’d rather be in mission control! #jsett

@JetsetExtra A5 Wel I’m currently wearing my spacesuit and helmet! Blast off!! Space travel all the way #JSETT

Q6: Would you rather: go cage diving w/ sharks in South Africa OR interact with gorillas on safari in Rwanda?

A6 This is too hard bc I want to do both in my lifetime. #JSETT https://t.co/4qabeoZvNf

A6: Ok now that I have to go with BOTH! But if I HAD to pick…cage diving…I think? Can’t I have both? #JSETT

A6 Gorillas in the Mist for me!!! No two ways about it! I swam with sharks in Tahiti so this was an easy choice. #JSETT #Travel

A6. I’ve been following gorillas in the Virunga range for yrs! Spoke to vet on Mt gorilla project in Rwanda once. Definitely Rwanda! #JSETT