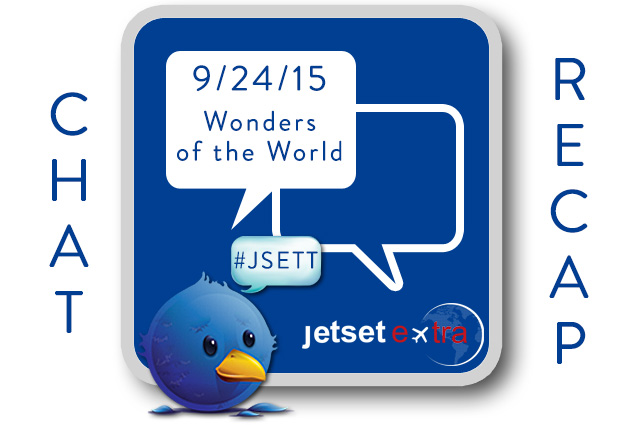 There are myriad lists of the “Wonders of the World,” from ancient and industrial to natural and underwater. For this week’s chat, we asked participants which world wonders they’ve seen—and which ones they think deserve more recognition. Keep reading for some of the top tweets!

Q1: Many “Seven Wonders of the World” lists have been compiled throughout the years. Is there one in particular you agree with most?

A1. I have visited a number of natural and man made Wonders and can’t pick one above another. Fascinated by all. #JSETT

A1 7 ancient wonders list seems “coolest” to me but also impossible now RT @JetsetExtra Q1: Many “Seven Wonders of the World” lists #JSETT

A1: I like the “Natural World Wonders” list…just checked one off too, the Grand Canyon! #JSETT pic.twitter.com/HDpkOQfbDF

@JetsetExtra A1. I pick and choose a little bit from them all & add them to my wishlist. All valid IMO – something for everyone #JSETT

@JetsetExtra A1: They all have something to take from. It’s hard to break it down to 7. #JSETT

Q2: The Great Pyramid of Giza is the only one of the Seven Wonders of the Ancient World still standing. Have you seen it?

A2 Yes, have seen the pyramids…will dig up a photo! #Jsett

@JetsetExtra Yes, I saw it back in 2002. Spent New Year’s Eve there, could see it from my hotel room which is adjacent to them. #JSETT

A2. I haven’t seen the pyramids yet but my grandma did around 1921 #JSETT pic.twitter.com/S9zoK46GOY

A3: Arg. Only one…the Colosseum, but everything else is on my “to-go” list. #JSETT pic.twitter.com/SO6SHcsLNK

A3. I visited Chichen Itza in April and saw the Colosseum years ago. I’m fond of both cuz studied both at Uni #JSETT pic.twitter.com/q5bbekbhfw

Q4: In 2011, the New 7 Wonders of Nature were announced. Have you visited any of these places?

A4: I’ve been to 4 of them, missing all those from the Americas. #JSETT

A4: Wow no! And I love anything natural wonder-ish! Must start going! #jsett

Q5: Did you know the Seven Wonders of the Industrial World include the Brooklyn Bridge, Hoover Dam, and London sewerage system?

@JetsetExtra A5: I didn’t but I’ve been to all of those! YAY! #jsett

@JetsetExtra A5 Then I’ve been to more of those than the natural ones. Not surprising, since I prefer urban destinations but funny. #JSETT

@JetsetExtra I had no idea, but I guess I’ve seen atleast 2 then – Hoover Dam and Brooklyn bridge! #A5 #jsett

Q6: Is there any place you think deserves recognition as a natural or man-made Wonder of the World that hasn’t been?

@JetsetExtra A6: So many, but the photos I have seen of Zion National Park come to mind. #jsett pic.twitter.com/aEvKPItyHV

A6: I thought the Angkor temples should be on there. #JSETT