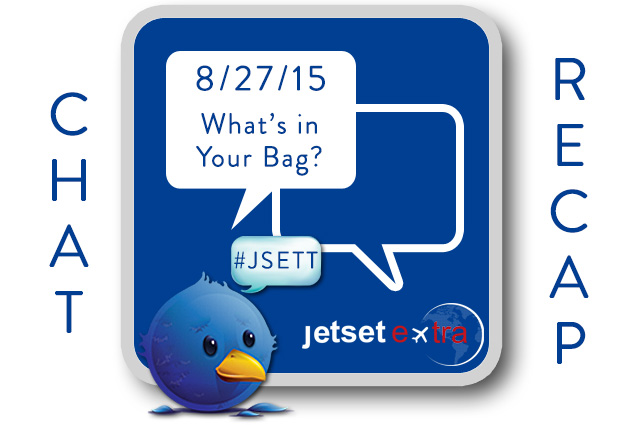 What do you have in your travel bag at any given moment; a passport, sunblock, a map? See what our #JSETT participants carry with them at all times. You never know when the travel bug might bite.

Q1: Let’s ease into this ☺ … Who has a passport in their bag right now? #JSETT

#JSETT groggy from my red-eye this morning from Vegas, but here I am! http://t.co/pvwJkfqfti

Q2: We want to see who has a pair of sunglasses and sunblock in their bag right now. #JSETT

Q3: We are looking for someone who keeps a paper map in his or her bag. Does anyone use those anymore? #JSETT

Q4: We want to see who has a @GoPro camera or a Selfie Stick in their bag right now. Bonus points for both. #JSETT

@JetsetExtra @GoPro thankfully I have gorilla like arms that enable some good shots without #JSETT pic.twitter.com/c3bmWhqwfr

Q5: Who has a boarding pass or ticket stub from their last trip in their bag? #JSETT

A5: just ripped this off my bag. Heading back tomorrow! #jsett pic.twitter.com/tyW54YIqU4

Q6: Last but not least… Who has an item purchased in another country in their bag? List the item and the country it’s from. #JSETT

@JetsetExtra #JSETT could not go to Canada and not buy an Aero bar, you must try pic.twitter.com/1fLfvM0CTM