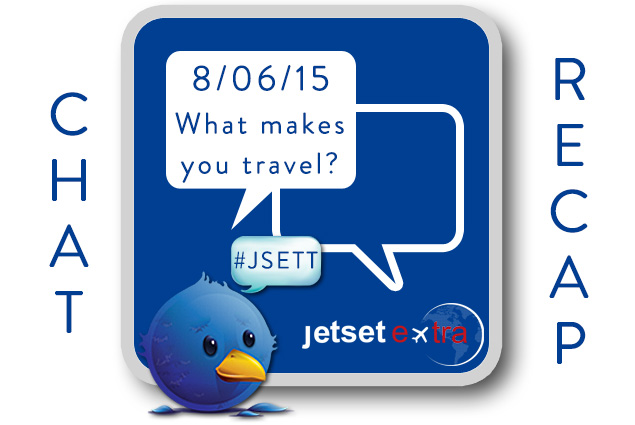 For whatever reason, in whatever way, we’ve caught the travel bug—and we’re not looking to get rid of it anytime soon. Read on to see what, why, and who inspired people around the world to keep on planning that next adventure.

Q1: How long are you usually in one place before you start looking to go somewhere else?

A1.) Depends on the place. Sometimes a day, sometimes not for a week or longer. #JSETT

#JSETT A1 I like to go different places various lengths of time, Alaska in Summer a couple weeks per stop is good, California a couple days

@JetsetExtra A1: Depends on what’s going on in my life. I’m always down to explore the city I live in. Otherwise a couple months max #JSETT

Q2: When you travel is there something special you get from your experiences that keeps you wanting to experience more and more?

@JSETTchat A2 The people! The locals are always my reason for staying and returning to a destination #JSETT #Travel

A2.2: We did make a commitment to our daughter to give her the whole world – something I didn’t see much of growing up. @JSETTchat #JSETT

A2: It’s the escape from daily life, breaking away from the 9-to-5 schedule and finding adventure in someplace different from my home #JSETT

Q3: Is there someone special in your life that has inspired you to be a traveler? How did they inspire you?

@OneTravelLove A3: My grandmother. She always encouraged us to explore and travel as much as we could #JSETT

A3: My grandma had a wall of framed images of all the places she had been. I stared at that wall for hours, dreaming. #JSETT @JetsetExtra

A3 My partner inspired me to start travelling around 7 years ago. He has such a thirst for adventure that was contagious! #JSETT

@JSETTchat A3. All credit goes to my parents who took us on trips & put travel books in our hands and encouraged us to fly. #jsett

@JetsetExtra A3 #JSETT My parents took my sister and I on trips in the U.S. and cruises. That gave me the bug!

Q4: Do you find you’re more the person you want to be when traveling vs. when you’re not traveling? How are you different?

@JetsetExtra A4 100%! When im travelling im engrossed in the moment(s), when at home im always thinking about where else I could be #JSETT

.@OneTravelLove A4: Every time I travel I feel like I become a better, more accepting and well rounded person! #JSETT

A4: Absolutely! We’re both happy, in the moment and tuned in. We are totally in our element and it’s why we chose to change careers #JSETT

Q5: Do you feel like traveling is addictive? Does that addiction drive your destination choices?

A5. Totally addictive. I get antsy when I’ve been home to long. Always looking, always planning #JSETT

A5: Travelling is addictive but my destination choices are based on a mixture of experiences and opportunities. #JSETT

A5. I’m addicted to adventure, but it doesn’t have to be my own. Books, movies and television work almost as well as travel. Almost. #JSETT

Q6: What would you say is your #1 reason for traveling and would there ever be a reason you stop traveling?

#JSETT A1: my number 1 reason to travel is to be out of my bubble and experience a new culture and meeting new faces. @JSETTchat

A6: I travel to learn more about the world and its people. #JSETT @JSETTchat

A6: To learn about the world and see the people, cultures and landscapes. We’ll keep going as long as we can! #JSETT

A6 Travel is a living school: history, events, places stay in my brain from traveling, not textbooks. #JSETT https://t.co/v2gb1mtyLr