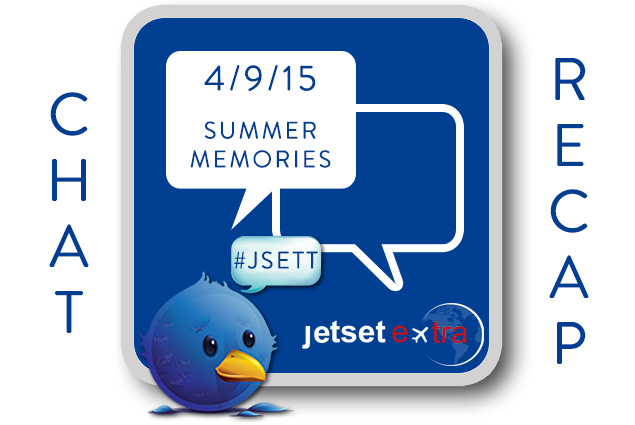 For this week’s Twitter chat, we partnered with Flytographer, which books local photographers in more than 130 cities for candid vacation shoots. Our topic: summer memories, and how Flytographer can capture that trip of a lifetime.

Check out our favorite responses below:

Q1: Summer can be very special. When you travel to a summer destination how do you capture those memories (pictures, video, journal)?

A1: Definitely through pictures and some video! #JSETT

@JetsetExtra A1 All of the above! But journaling is my favorite way to capture feelings in the moment to relive them later on #JSETT

A1. Of course pictures, but more so retelling the stories with those who shared the experience. #JSETT

A1: We know that video is growing more and more in travel media. And nothing beats good photos. #JSETT

A1. Blogging every night has been a good way for us to remember all the important moments – still refer to them now #JSETT

A1 On a group trip once, one passenger did sketches. Another time there was a watercolor painter….loved seeing their work. #JSETT

Q2: What cities are your favorites to spend summer in? Why do you prefer summer in those cities?

A2: Since I moved to LA, I like quick road trips and weekend getaways up and down the coast #JSETT

@JetsetExtra A2 changchun in north china! Lived there & its like a diff place in summer to winter. Goes from -20 to +35 grey to green #JSETT

A2: Cities period. Anywhere where I can walk. Bonus points for lots of trains, bikes and no cars. #JSETT

A3: I share when I travel through my social media sites, & save the best for the blog, since I’m starting out as a travel blogger 🙂 #JSETT

A3. Addicted to Instagram, then FB & Pinterest for sharing while on the road. So much fun seeing friends pictures simultaneously. #JSETT

@Flytographer @JetsetExtra A3 In the mo, via social media-love to #livegram on the road via #Instagram! Fun to connect w/ travelers! #JSETT

A3: While traveling, share via social media. After travel, share on the blog or create an album, a tradition my mom started. 🙂 #JSETT

@JetsetExtra A3 Instagram. It’s also tied to a personal blog for family and friends to check out when I’m on the road #JSETT

Q4: If Flytographer met you in a city for a photo shoot this summer, what city would you want to be photographed in? Why?

A4. Our Minneapolis/St.Paul has so many vistas, lakes, sculptures, festivals – awesome for #familytravel memories. #JSETT

A4: We’d love a sunrise shoot in #Hawaii with a luau in the evening! @Flytographer #JSETT pic.twitter.com/HEwGwYwk6b

A4: Going to be predictable with Cork City again. People expect Dublin or a big tourist area, but Cork is all I need out of Ireland. #JSETT

A4: Definitely Switzerland. Maybe Bern, to be specific. So much history, walkable, great trains, and ancestral home! #JSETT

A4. a photo of my husband’s first facial expression looking at the #WOW island where I lived 2 years #Tenerife we go in June #JSETT

Q5: Do you have a photo that you look back on to remember a journey you had, something that just takes you right back to that moment?

A5: This one- met a group of monks in Ayutthaya who were so sweet! #JSETT pic.twitter.com/z96Tn0bNZT

A5: all of my pictures backpacking through Europe and our road-trip honeymoon pics #JSETT pic.twitter.com/41e2tREc6Y

A5: A photo that brings memories: having fun with angles at the #GrandCanyon. Great Day. #JSETT pic.twitter.com/DPOP6dZNCT

A5. big smile day of #proposal #unforgettable moment after our crazy #LoveStory (that ended up in a book 😉 #JSETT pic.twitter.com/rjrOpPbbuX

Q6: In 140 characters tell us why you want to try out @Flytographer or be a return customer.

A6. Because I’m always the one taking pictures on our travels! Would love to be part of the story instead of recording it. #JSETT

A6: As I usually travel solo, it would be fantastic for someone else to take the photo instead of the awkward selfie. #JSETT

A6: Want to able to be present100% of the time, participate as much as possible, and still be able to capture the special moments #JSETT

A6. I’d love to travel with @Flytographer & leave the picture-taking in professional hands. How sweet to just be present on the trip. #JSETT

A6: because for once I wouldn’t have to worry about trying to snap the best pictures! #JSETT