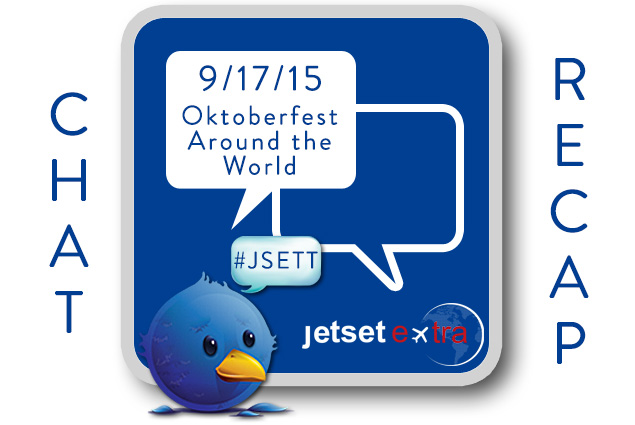 For this week’s #JSETT chat, we got into the spirit of the season and discussed all things Oktoberfest (which begins this weekend in Munich and many other cities throughout the world)! Check out the top tweets about Oktoberfest experiences and other fun fall activities:

Q1: What do you know about #Oktoberfest history? http://bit.ly/1grMr8l (Interesting it started with a royal wedding!)

@JetsetExtra a1 all I know is it involves cute German outfits and big beer steins! #Oktoberfest #JSETT

@JetsetExtra A1: I believe there are 2 main & original ones – Munich & Stuttgart, the latter is the one I have been to #JSETT

A1 Not much except that beer is involved. Did I need to know anything else? 😉 #JSETT https://t.co/UiH3SJQyvw

Q2: Did you know more than 7.7 million liters of beer are served over the 17-day period in Munich? Who’s got their beer goggles on?

@JetsetExtra A2: yes and we Germans are only second place of beer consumption, right after Czech Republic #jsett

Q3: Where in the world have you seen or celebrated #Oktoberfest?

A3). There’s a good one in LA, Old World Huntington Beach. Better than Torrance. And a fun one in Big Bear! #jsett

A3.) Munich!!! This is the mayor after tapping the first keg in the Hofbrauhaus. #JSETT pic.twitter.com/ge7Z59Skpy

Q4: Food at #Oktoberfest is a big deal. Do you indulge in traditional sausages and kraut or do you look for more refined fare?

A4: My dad’s grandparents came from Hanover so I actually grew up with my grandmother making kraut. I hated it as kid. Like now. #jsett

A4 have not been to #Oktoberfest but have been to Germany/Austria and love the sausages and kraut! #JSETT

@JetsetExtra A4 When I was in Germany and Austria, it was all about schnitzel and potato salad, yum! #JSETT pic.twitter.com/90glrsfUk4

Q5: What other fall festivals do you know about and enjoy?

Q6: Have you ever traveled somewhere specifically for its fall events and/or activities?

@JetsetExtra a6 they don’t determine our trip/vacation, but we do embrace seasonal activities while we are there #JSETT