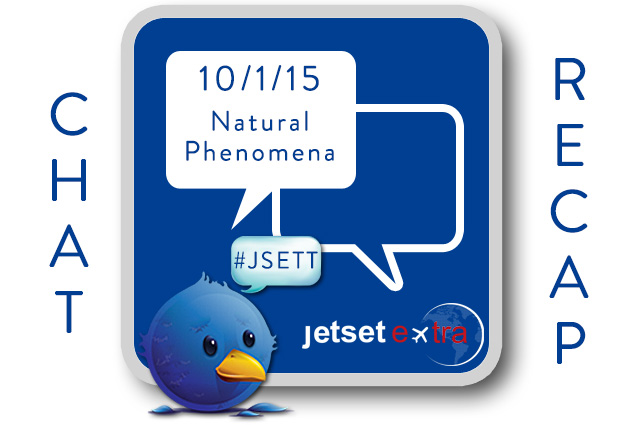 The world is full of beautiful and unexplainable natural wonders. We found six of the most incredible and asked our #JSETT chat participants if they had seen any in person. While some had gorgeous photos and stories to share, many contributors left with more must-see spots on their bucket lists than when we began!

Check out some of the top tweets from this week’s chat:

Q1: Did you see the lunar eclipse two nights ago? Where else in the world have you witnessed an eclipse?

A1 I missed the “blood” phase but definitely saw the eclips in #RedondoBeach. It was cool! #JSett I have seen other eclipses, but memory…

A1: YES!! Sat on my sidewalk in WeHo & became a moon-photog! I’ve seen all 3 blood moons this year! #JSETT pic.twitter.com/xHtpiWFDpp

Q2: The northern lights are a phenomenon sought out by people from all over the world. Have you seen them?

A2: No. But I’ve been to Iceland in the summer. Have to make a trip. #JSETT

A2. In some areas on the prairies in Canada (like near Winnipeg), you see them dancing on the horizon. I need to go to the Yukon! #JSETT

A2: I saw the northern lights in Iceland. A phenomena indeed! #jsett pic.twitter.com/r0DfHnLnrp

A2: Yes, when I was a child living in Maine.#jsett

Q3: Have you seen Death Valley’s “sailing stones” that seem to move across the desert floor without intervention?

@JetsetExtra #JSETT A3:What an odd phenomenon.It might be sand colored snakes moving the rocks which is enough to keep me away permanently!

A3: I have not but I will add it to my bucket list for sure! #jsett

Q4: Have you seen Rainbow Eucalyptus? It sheds its bark and leaves vibrant colors behind.

@JetsetExtra I haven’t! One day though, looks so cool #JSETT

@JetsetExtra A5. I have seen it, but sadly not in the Maldives. #JSETT

A5. The Maldives have been on my list for years! #JSETT

A5). Okay THAT I have seen. In other places. Whew! 1-for-5 now. Batting right at the Mendoza line. #JSETT

@JetsetExtra A5. I’m planning on visiting this beach in Puerto Rico for cmas! Can’t wait! #JSETT

Q6: Last but not least, the lenticular cloud that hangs stationary over Mt. Olympus. Have you seen it?

@JetsetExtra #JSETT So cool, a contact lens for an aging mountain, so it can better view the heavens above.