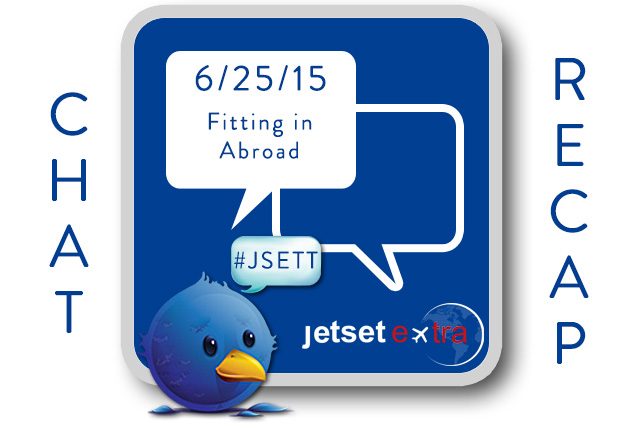 Whether you call yourself a traveler or a tourist, it doesn’t matter. When traveling, we are all tourists, but some want to fit in and look less like a tourist and more like a local—and some don’t care about fitting in at all! See what our Twitter chat participants had to say about fitting in with the locals.

Q1: Is fitting in like a local something you think about when you travel? Why or why not? #JSETT

A1 yes and no. I want to see some of the major sites like a tourist, but want to experience places/things like a local #JSETT

A1: With appearances, yes. With seeing a place, I like to go to major sites and hidden gems so I don't mind being a bit touristy. #JSETT

Q2: Do you think locals treat those travelers who stand out differently than those who don’t? How? #JSETT

@JSETTchat A2: I love to find the best local places but I ALWAYS have my camera with me so I always look like a tourist. #JSETT

A2: Yes. Assumptions are made whether or not they're accurate. @JetsetExtra #jsett

Q3: What would be your #1 piece of advice for new travelers going to a different country who want to fit in? #JSETT

A3: Take time to learn a little bit of the language, it's always appreciated! And, research customs etc #JSETT

A3: Leave the fanny pack, zip off shorts, and socks with sandals at home. #JSETT @JetsetExtra

Q4: When in a new destination what rules do you follow for not being offensive or disrespectful of the locals? #JSETT

@JSETTchat A4. Observe. Learn. Think. If local customs are offensive to you, remove yourself from the situation. Avoid prison. #jsett

A4 When I first get somewhere I do observe (and listen) than talk. Amazed what you can learn with open eyes/ears, closed mouth #JSETT

A4 #JSETT Listen carefully, study your surroundings, think, and talk if you have something to add

Q5: How do you suggest new travelers make local friends? Where is the best place to blend in and meet new people? #JSETT

A5: In Barcelona, it's all about hanging out at the bars during the Barca matches! Footy unites! #JSETT

A5 #jsett Jump onto #twitter and #Instagram and use relevant hashtags, socialize online and ask for a meet up (not in a creepy way)

@JSETTchat A5 Local cafes… Hit the side streets and find out where the locals go. It is always more colorful… #JSETT

Q6: Have you ever had a time when you were treated badly because you were a traveler who didn’t fit in w/ the locals? When and where? #JSETT

A6 When I went to work in Cape Town at the Mt Nelson in 1993, the local "chefs" in the kitchen HATED (on) me for being an American #JSETT

A6: Not me, but my friend was plus-size & everywhere we went in France, girls would whisper behind her back/stare. It was horrible #JSETT

#JSETT A6: Heathrow, b/c we were TOO polite and "nice-American". Pushy snooty types got to the fronts of lines. @JSETTchat #badexample