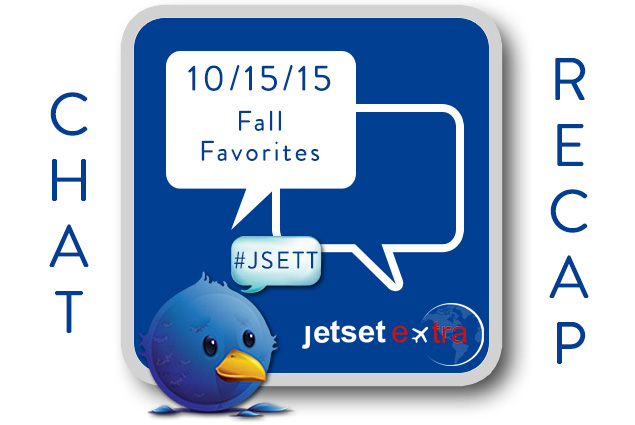 Fall is here—one of our favorite times to travel! During our latest #JSETT chat, we put a few questions about this festive season to our Twitter friends. Keep reading to see how they replied:

Q1: Where is your favorite fall destination? What draws you there?

A1: I grew up in New England, so definitely my region with Maine, Vermont, New Hampshire, Connecticut, and Rhode Island. #JSETT— micheleherrmann (@micheleherrmann) October 15, 2015

A2. Harvest time at the @SaintPaul Farmer’s Market; telling time by what food is freshest #JSETT— Scott Norris (@weninchina) October 15, 2015

@JetsetExtra A1 New York in the Fall. Love to see the leaves change in Central Park #JSETT #nyc #fall

@JetsetExtra A1 #JSETT a place with trees – I love foliage, the colours of the leaves…

A1. I love being out and about in Scotland. The autumn colours look amazing reflected in our lochs. #JSETT pic.twitter.com/cPqwVSuZp8— Finding A Neish (@findinganeish) October 15, 2015

Q2: Is there something that makes you feel like fall has arrived?

A2 It officially feels like #fall when we head to the pumpkin patch. #jsett pic.twitter.com/m8FwVAl2vN— Heather Mundt (@momfari) October 15, 2015

@JetsetExtra A2. When my yard is covered in beautiful rust colored leaves & I pull out my favorite scarves :-). #JSETT

A2). Yes the popping of pads and leather on a football field. (I used to cover HS football). Now just seeing it on TV! #JSETT— Bar Blogger (@BarBlogger) October 15, 2015

A2.) In Southern California, land of the endless summer? Hmmm. Beaches not quite as crowded, I suppose. The sun sets sooner! #JSETT— pubclub (@pubclub) October 15, 2015

Q3: Do you have a favorite fall treat you wait all year to eat?

@JetsetExtra A3 Pecan Pie it is so good. #nomnom #JSETT #fall #foodie

A3. At boarding school we used to get bonfire toffee every November 5th. It’s one of my favourite traditions to revisit. #JSETT— Finding A Neish (@findinganeish) October 15, 2015

A3 Big fan of the gingerbread latte. Or is it the nutmeg latte? Also like the mint mocha. I try to resist but they are so good. #jsett— Kiera Reilly (@KieraReilly) October 15, 2015

Q4: The fall holidays include Thanksgiving (Canada and US) and Halloween. Which do you prefer and why?

@JetsetExtra A4 Thanksgiving, I spend it every year w/friends in LA. It’s the perfect time to get out of the NYC cold & into the sun. #JSETT

A4 Thanksgiving for sure. Christmas always rolls around quickly and stresses me! #JSETT https://t.co/a0D5ffb9Wm— KAT VON B (@TRAVELINGGREEK) October 15, 2015

@JetsetExtra A4, I prefer Thanksgiving because it gives me a couple of extra days to fly away somewhere. Gotta take advantage! #JSETT

Q5: Have you ever been leaf peeping? In your opinion, where is the best place to do this?

A5 When my sister was in college – Middlebury, Vermont, I flew up from NYC to visit in the fall. Amazing. Crisp cool weather too. #JSett— Kiera Reilly (@KieraReilly) October 15, 2015

Q6: Has it begun to look like fall where you are? If not, when do you think it will start?

@JetsetExtra A6 Boarding up my windows in LA getting ready for El Nino 2! But enjoying this heat!! #JSETT

@JetsetExtra A6 The weather in NYC has been crazy, leather jackets one day, tee shirts the next. Like nature can’t make its mind up! #JSETT