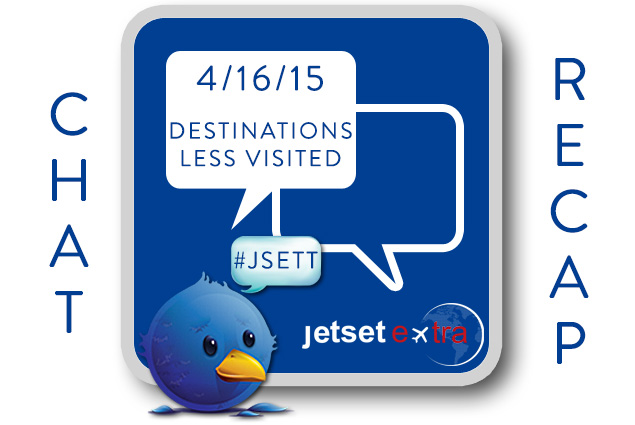 On Tuesday, President Barack Obama removed Cuba from the State Sponsors of Terrorism list, further opening the country up to American travelers. This got us thinking about how small our world has become, due to an ease in travel regulations and/or an increase in transportation options. We know our chat participants have visited some amazing, less-discovered places and thought they could offer up their thoughts and expertise. And boy did they deliver!

Here are some of our favorite responses:

Q1: Some countries (Myanmar, Cuba, etc) have recently opened to new tourism. Are you interested in visiting less-discovered places?

A1: Yes please! I want to go EVERYWHERE! #JSETT @JetsetExtra

@JSETTchat A1: to some, but I don’t want to go “just because” they’re now opening up — want to go to enjoy their culture. #JSETT

A1: I prefer travelling to emerging places – though some places I’ve visited (Syria, Yemen, Iraq) are not so safe now. #JSETT

A1: It’s a fine line. It would be great to discover places that have been unavailable, but I’d hate to see tourism ruin it. #JSETT

Q2: If you could pick one less-visited destination to travel to this year, where would you go and why?

@JetsetExtra A2 Borneo and Sumatra, to see orangutans in the wild. Could hitch it to a trip to Thailand, Vietnam or Malaysia. #JSETT #travel

A2. We want to go back to the Phillipines! It’s a beautiful place and not often visited for some reason #JSETT pic.twitter.com/uh4MrResWG

@JetsetExtra A2… #CostaRica… And #Peru also. Oh, and the countries of #Scandinavia (I know, that’s 3! Sorry, can’t help it!) #JSETT

A2: Ha Long Bay in Vietnam is gorgeous and we can’t wait to get back! #JSETT pic.twitter.com/wCmhgpA6kQ

Q3: Are you concerned about how tourism will affect a less-visited country? How do you think things could change?

@JSETTchat A3: hope that tourists can adapt to the destination not the other way around, keep it genuine #jsett

@JSETTchat A3: more tourists = more impact. Therefore try to be a non-impact traveler (and help others do the same) #JSETT

Q3 A lot of countries are still figuring out how to promote & develop tourism strategies so my answer is NO. Be adventurous, go early #JSETT

Q3: Tourism can bring so much revenue & be a huge benefit to a country but also ruin authenticity. A tricky balance to get right. #JSETT

Q4: Is there a country you want to visit but are too nervous/afraid to travel to at this time? Where and why?

@OneTravelLove @JSETTchat A4: lots in Africa, but quite scary right now in many places #JSETT

@JetsetExtra A4. Myanmar. Excited to visit & wouldn’t be nervous solo, but worry about taking the kids. #JSETT

A4. Always wanted to go to Egypt! Can be unsafe for female travelers #JSETT

A4: Israel nervous from the news, but there are so many travelers who have said how amazing it was and how safe they felt #JSETT

Q4: Would love to see the sulfur fields of Ethiopia but both temperatures and political unrest make me uneasy at the moment. #JSETT

Q5: Have you ever experienced difficulty getting a visa or travel permits to a country?

A5: Visa mistakenly issued w/ the wrong expiration year, but I still made it through Heathrow fine with it expired. #JSETT @JetsetExtra

A5. No. Guess I should set my sights on more challenging destinations. #JSETT https://t.co/z7G8ccytqP

A5 Always had issues at Canadian border when driving in from the US. Been searched, both personally and my vehicle, every time #JSETT

Q6: Is there a destination you think deserves more or different attention than it gets currently?

A6 Costa Rica, especially for Culinary Tourism. It (and most of Central America) is/are a black hole to the culinary world #JSETT

A6. the Philippines – it’s always typhoons in the news but it’s an awesome place that everyone should visit! #JSETT pic.twitter.com/SYlGda8HNr

A6 #JSETT – Mexico for sure. Admittedly there are problems in certain areas, but there are places in my country not suitable for tourists.

@JSETTchat A6 We think many of the smaller Caribbean islands deserve more attention. Look at this beauty! #BVI #JSETT pic.twitter.com/uJqXmcfexC

A6: I think getting to know the place you live is often under-rated – many new things can be discovered in places seen as familiar. #JSETT

@JSETTchat A6 another one is #Taipei as an Asian city trip, did not see much western tourists #JSETT pic.twitter.com/JYGrddbAmP

A6 People always think of London when they think of traveling to the UK, but the rural UK is some of the beautiful land in the world #JSETT

A6) Mesopotamia modern #Iraq is rich with Culture, History, and archaeological sites such as Babylon deserves different attention #JSETT