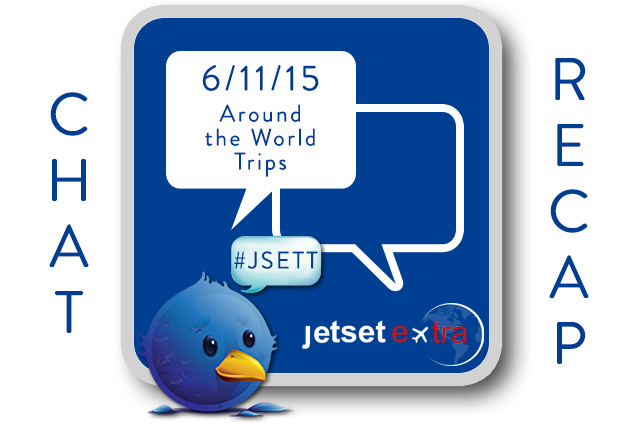 Have you ever wanted to embark on an around the world trip? That’s what we asked our Twitter chat participants this week, and the answers were across the board. While to some a RTW trip is something they’ve only daydreamed about, others have already spent months and even years traveling across the globe.

Get their advice and check out our favorite responses below:

Q1: Have you ever dreamed of doing a RTW trip? Or have you done one already?

A1: I’ve dreamed of going to lots of places but never thought about a RTW trip…might need to! #JSETT

A1: Not really, have traveled a lot so don’t know what kind of added value RTW trip would have…Usually I already do #powertraveling #JSETT

@JetsetExtra A1 thought about RTW travel, but haven’t done in depth research. Would love to know pro and cons #JSETT

Q2: How much time do you suggest for planning a RTW trip? How long is the ideal RTW trip?

A2 I’d say at least 2 years would be ideal. Otherwise the temptation to move too fast is too great. #jsett

A2. #JSETT It can be a fast or as slow as you want; each person must decide.

@JetsetExtra A2: I’m waiting on until I can take a minimum of 3 months off, but I’d prefer at least a year. #JSETT

A2: I found 5 months is about the max. time for me to enjoy a RTW trip, unless I’m traveling slowly and stopping a lot along the way. #JSETT

Q3: What number of countries do you think is ideal and how long would you spend in each?

A3 I wouldn’t bother counting countries. Go to the places you want the most. It isn’t a competition. #jsett

@OneTravelLove A3 At least a few weeks in each country. Make a base w/ good train/bus network, plan small trips as you go! #JSETT

A3 Everyone is different. I originally wanted to see every and all countries. That changed after being on a #RTWtrip @JetsetExtra #JSETT

#JSETT A3: My ideal RTW trip is 4-5 countries but depends on my traveling lifestyle. @JSETTchat

Q4: How would you plan for an emergency? Do you need a plan or of you think it’s safe to play it by ear? Is travel insurance a must?

A4: I always find out what the local hospital situation is to be safe and let people know where I’m at #JSETT

@JetsetExtra A4: Always have back up copies of your id and travel documents. 🙂 Also travel clothing works against pick pockets #JSETT

@JetsetExtra A4 Travel insurance is so inexpensive that it doesn’t make sense for me to travel without it. #JSETT

Q5: What advice would you give a first-time RTW traveler?

A5 Don’t fall for the temptation to try to see “everything.” Give yourself permission to have a lazy day or 2 in a place. #jsett

A5 Don’t try to see everything. Give yourself “days off” and be ready to change plans on a whim @JSETTchat #JSETT #RTWchat @JetsetExtra

A5: Slower is better. It’s easier to get burnt out traveling fast. Try to spend some time in a places getting to know them. #JSETT

A5. Metro passes, @CityPASS where available allow you to take time, relax in choosing. Don’t rush thru each day, savor where you are. #JSETT

Q6: Do you think you’d do a RTW trip on your own or with another person? What do you suggest and why?

@OneTravelLove A6: another person – even diff people for diff legs of a trip. I love sharing experiences with someone! #Jsett

@JetsetExtra A6 I’d maybe travel with another person on portions of the trip, but not the entire duration. #JSETT

#JSETT A6: I would definitely do a RTW travel on my own unless if someone wants to travel with me. @JSETTchat