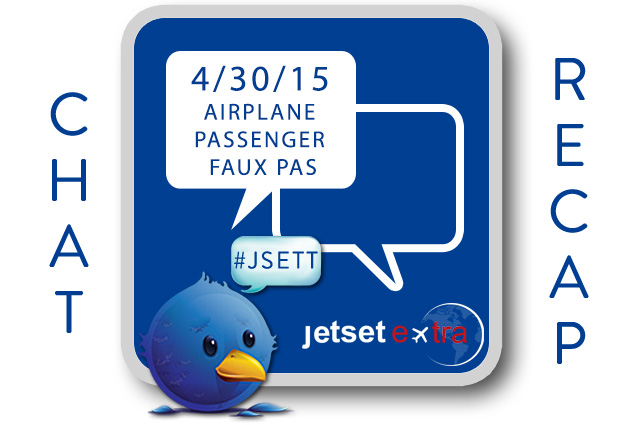 There once was a time when people arrived at the airport in their finest dresses and suits to board an airplane. Nowadays, you’re more likely to find fellow passengers in sweats who are none too shy about snacking on stinky food, passing gas, and taking over the armrest.

This week’s chat was all about our least classy experiences on a plane, giving some of you what appeared to be a much-needed venting session

Q1: Other passengers on planes can sometimes be weird, scary, or downright gross. Have you experienced this?

@JetsetExtra A1: Of course! So many times! I'm not sure you want to get me started…. #JSETT

@JetsetExtra A1 Numerous times…Burping, Farting and sometimes Motion sickness to other passengers made your journey horrible #JSETT

A1: Definitely all of the above. I have a feeling it's going to be a vent session today #JSETT

Q2: What is the grossest thing you’ve seen someone doing on a plane?

@JSETTchat A2. Go to the bathroom barefoot. Barefoot. In an AIRPLANE BATHROOM. *runs screaming* #jsett

@JetsetExtra A2. Someone decided to apply a moisturizing facial mask from HNL to LAS. Looked like something out of a horror movie! #JSETT

Q3: What is your biggest pet peeve when you are flying? Have you ever addressed it with the person doing it?

#Jsett A3 Strong odors…be them from pungent foods or just bad hygiene are the worst for me.

@JSETTchat A3: I'm smaller, so when people take up my seat or remove the armrest to "share" my seat… (enjoy my personal space). #JSETT

@JetsetExtra #JSETT A3: Prolly having my seat back kicked or pushed in to by the person behind me. I usually don't say anything. :/

A3 Last week a child kicked my seat from NY to LA & parents didn’t do anything. I offered to buy child toy @JSETTchat #JSETT

Q4: Have you ever been on a plane when someone freaks out or acts scary?

@JetsetExtra #JSETT A4: A very nervous passenger next to me started doing Tai Chi in the middle of the flight.Kind of bizarre.

#JSETT A4 Yes, we had first a kid freak out and had to be let off the plane and then the mom freaked out, 2 trips back to the gate for this

@JSETTchat A4:There was a child who screamed the entire 2 hour ride once… slightly disturbing, the entire plane was annoyed/worried #JSETT

@JetsetExtra A4 #JSETT A boy got locked in the lav and was hysterical. We calmed him after they got him out.

Q5: Feet on a plane: Socks or no socks? Allowed on seats or not? What do you do with your feet to stay comfortable on a long flight?

A5: if it's a long flight shoes off socks on is okay as long as they're nowhere near me and they DONT SMELL! #JSETT

@JSETTchat A5 I will only take my shoes off in a trans-Atlantic flight. I always keep my socks on. #JSETT

A5 Ew. Socks please, no touching anything. People laugh at my Birks + socks on the plane but it’s for your own good @JetsetExtra #JSETT

A5: Good one! I take off shoes but never socks. I keep feet on the floor or under the seat. Never ON the seat! #JSETT

@JSETTchat A5. Socks on. Keep your feet on your own seat, thank you ever so. Feet getting tired? Get up and walk! Stretch. #jsett

Q6: Name 5 things that you wish airlines could enforce on an airplane?

A6: Carry on restrictions, no reclining during meals, hygiene of exposed extremities, personal space, and pass gas in restrooms only #JSETT