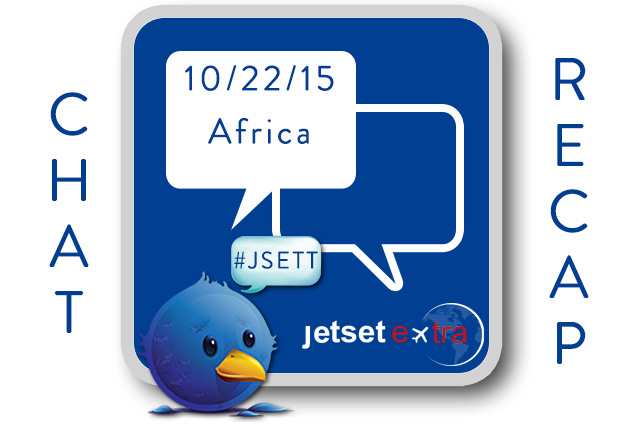 Africa is a vast continent with various travel opportunities—whether you want to see the pyramids of Egypt; spot lions, elephants, and zebras on safari in Kenya; or sip on a glass of Cape port in South Africa. For many of our #JSETT chat participants this week, these three experiences barely scratch the surface of their Africa bucket lists. They shared their memories and must-sees, highlighted below:

Q1: Africa is a huge continent with many places to see. Where have you been or do you want to go?

A1 The only place we’ve been in #Africa was #Zimbabwe in 2004. It was amazing. https://t.co/tH8EKvPuar #JSETT pic.twitter.com/F7uQmqcG2k

@JetsetExtra A1. For Africa, I’ve been to Egypt and Morocco. Both incredible countries. #jsett

@JetsetExtra I’m in Kenya now! I’ve been to 10 countries in Africa, around 40 to go! #JSETT

A1: I love Africa! I’ve been to Ghana, Burkina Faso, Mali, Mauritania and Morocco, South Africa& now living in Egypt. Want to see all #JSETT

Q2: For those who’ve been to Africa, where do you suggest going first and why?

@JetsetExtra A2: I say the first thing to see in Africa is some place where you can observe wildlife in the actual wild. #JSETT

A2: Morocco is an easy trip from Spain and very interesting to explore. For southern Africa, South Africa may be a good starting pt. #JSETT

A2: Namibia was described to me as “Africa for beginners” and I’d agree. #JSETT

Q3: Which part of Africa could you visit over and over again?

A3 Only been to the seychelles, but wouldn’t mind going back. Get place to relax and unwind #JSETT

A3 Tanzania and zanzibar! @JetsetExtra #jsett they have it all! Safari, beach, mountains and beautiful people!

Q4: Political issues are a concern for visitors. How do you suggest they avoid any conflict they don’t want to be a part of?

A4 Talk to fellow travelers/bloggers who are there or just been there. Can give the best perspective #JSETT

#JSETT A4 Don’t get involved in protests and keep out of political discussions. Enjoy seeing and experiencing life there

A4: Look up current events, or better, a local blogger and ask for safety tips! I interviewed 2 before I went to volunteer in SA! #JSETT

A4: Keep a low profile, dress appropriately, stay out of trouble #JSETT

Q5: How do you suggest finding a safari tour that is truly active in supporting wildlife conservation?

A5. I would ask a safari expert. 1 friend has been on several dozen safaris. I would start woth her. RT @JetsetExtra Q5: #JSETT

A5 Research!! I have visions of volunteering and assisting in Animal Conservation and would make sure that my beliefs are aligned #JSETT

A5 I’ve written for copy for one of the most ethical operators: Simon Gluckman, https://t.co/YBgAHQGpwd. #jsett https://t.co/pUet6IagTd

Q6: What landmarks or natural wonders are must-sees throughout Africa?

#JSETT A6 Table Mountain in Cape Town is on my list

A6: What I look forward to seeing in Africa–dunes in Namibia, Victoria Falls, underground rock churches in Lalibela, Ethiopia #JSETT