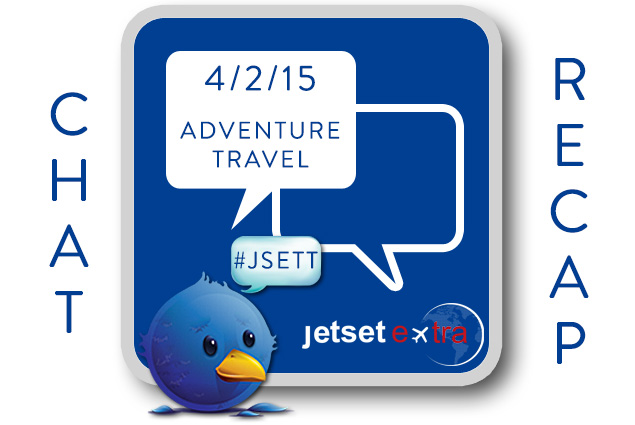 How adventurous are you? That was the topic of our latest Twitter chat, and we loved getting your thoughts! While some are perfectly fine keeping their travels on solid ground, others are always on the lookout for a way to reach new heights—or depths. One thing’s for sure: When you travel to new places and step out of your comfort zone, adventure will find you.

Check out our favorite responses below:

Q1: Do you seek adventure in your travels? Or do you prefer to let it find you?

A1. I like to find adventure – if it finds me it’s always a bit more fun and often crazy though. #JSETT

A1: If you’re of adventurous spirit, adventure will find you one way or the other! #JSETT pic.twitter.com/YJ5giO3A1C

A1 @JetsetExtra I love the idea of letting adventure find me but help it w;/research to find out what my options are for each trip. #JSETT

Q1: I seek out adventure. Love to get some kayaking or hiking in when I travel #JSETT

A1 I usually let it find me, but then I end up enjoying it and seeking more! #JSETT

Q2: How adventurous have you been? Do you have an adventure threshold?

@JSETTchat A2. Pretty much anything goes as long as I am on the ground or on the water – I won’t jump off anything. #JSETT

A2 I guess zip lining and bobsledding are considered adventurous. I do have a threshold. No bungy @JSETTchat #JSETT #AdventureTravel

@JetsetExtra A2 #JSETT Mine doesn’t include falling from heights! #nothanks

@marybeen21 A2: Pretty adventurous, haven’t found my limit yet. Tho I don’t think I want to try skydiving…!!! #JSETT

A2: Trying local food on holiday can be an adventure, especially for children #JSETT

A2 #JSETT – Adventurous is so relative. My threshold varies – especially as I get older and have more of a self-preservation desire.

Q3: What does “adventure travel” mean to you?

A3- Being out of my element doing something new. Whether it be a masuri festival Japan or multi-day hike in AZ #JSETT

A3: #AdventureTravel is about stepping out of your comfort zone and trying something new – doesn’t matter what exactly. #JSETT

A3. Adventure travel is everything! You learn so much about yourself when you push your limits! #JSETT

A3. Having experiences that you never imagined you would ever have! Wether it be jumping off a cliff or eating street food. #JSETT

A3) Since I travel w/ kids, #AdventureTravel is pushing ourselves outside of our comfort zones & experiencing extremes #JSETT @JetsetExtra

A3: Adventure Travel means experiencing all of your senses and pushing your limits! Discovering something you thought unimaginable! #JSETT

Q4: Do you have any fears that hold you back from extreme adventure activities?

A4: I’m not a fan of heights, so anything involving that won’t see me participate. #JSETT

A4: There’s always that thought “I don’t think I can do this”. Baby steps and you’ll get there! #JSETT

A4. Some fears hold me back from extreme adventure – I need to be functioning for family, kind o’like having proper moving parts too. #JSETT

A4: Traveling as a family I fear long queues and running out of snacks! Any adventure is possible with enough snacks in your bag #JSETT

A4: Fear of heights! But this view makes pushing through that fear worth it! #JSETT #ttot pic.twitter.com/sjz8mVKtvD

@momfari A4: I do my best not to let my nerves conquer my actions! #JSETT

Q5: Picture time! Share with us a picture of an adventure you’ve had. Name the place and activity.

A5 Hiking South #Kaibab trail @GrandCanyonNPS 1 day down 1 day up! Phantom Ranch in between. #JSETT pic.twitter.com/KIcAOauhkE

A5. Swimming with whale sharks in the #Philippines. This is my other half but someone had to take the pic lol #JSETT pic.twitter.com/ZhdG4PqicH

A5: Breakfast in the middle of the Amazon Jungle in Peru! #JSETT #ttot pic.twitter.com/UpHHs7lokB

A5. Crossing Mongolia independently from east to west was an adventure! #JSETT pic.twitter.com/JuuNedNHwC

Q5 Adventure pix? A5 My friend Simon, as we canoed #Zambezi & elephants approached us just a few feet away. #JSETT pic.twitter.com/TTFg9KVgKs

Q6: If you could plan a trip around adventure activities, where would it be and what would you include?

A6 Just one!? Hiking to Machu Picchu then a quick trip to the Galapagos #JSETT

A6 Catalina Island with @ashleycolburn & @marybeen21 zip lining snuba SUP and a bunch of other stuff I can’t remember! #JSETT Awwww

A6: I would plan a diving trip someplace… #Fiji?! #JSETT

A6: It would be amazing to go hiking on all the best spots on the Velebit Mountain. The scenery is spectacular.#JSETT pic.twitter.com/q1Lx6og49J

A6. I just want to go SCUBA diving all over the world – this gal is addicted! #JSETT @PADI

@JSETTchat A6: Dying right now to go to #Patagonia in Chile/Argentina so I can explore glaciers and drink wine. #JSETT