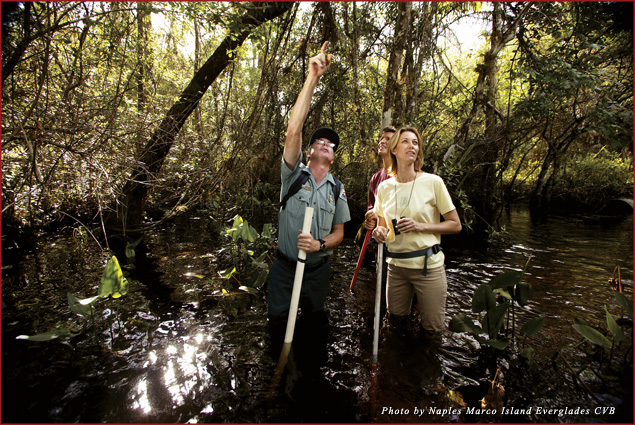 Clutching onto vines and the bark of old-growth cypress trees damp with humidity, I inched my way over rotting tree trunks and through shoulder-high ferns trying to stay on the muddy ground rather than slosh through the knee-deep water.

Sunlight filtered through the tangle of tree branches above and shimmered off the water in a nearby clearing. The scene reminded me of an enchanted forest, and perhaps it was. I was deep inside the Everglades walking in the dense undergrowth of the Fakahatchee Strand State Preserve, the largest tropical swamp in the world. My naturalist guide, Cindy Hackney, and I had left any sign of a path far behind. Cindy trusted her instincts to take us to her favorite spot: where the wild orchids grow. She was wading through the shadowy water with glee, reveling in its coolness. “Nothing to be afraid of,” she assured me. “The water is too shallow for alligators.” The water is fine for water moccasins, however, but they only swim when they’re hungry, she added. 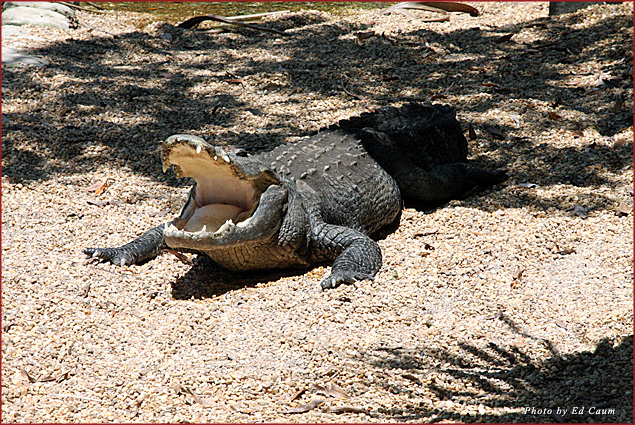 “I’ve found one!” she called out, motioning for me to slosh on over. She’d spotted a rare ghost orchid (dendrophylax lindenii), made famous by the Hollywood movie “Adaptation,” clinging to the side of a mossy tree trunk. Two bridal-white blooms dangled in mid-air from the plant’s leafless root system, flaunting their creamy luster to thrill the Giant Sphinx moth, the plant’s pollinator, and occasional visitors who venture into their remote world. It had been a long, soggy trek to get here, at the edge of the Fakahatchee Central Slough, the deepest slough in Florida and home to North America’s largest concentration and variety of wild orchids. It seemed unbelievable that the sophisticated city of Naples with its lively restaurants and designer shops was only a few miles to the west. I was thrilled to be here. Not so much that I’m an orchid enthusiast as I am a huge fan of the Florida Everglades. Orchids aren’t the only exotic flora we encountered. Throughout our trek, endangered Florida royal palms towered overhead, and bright red bromeliads clung to the trunks of cabbage palms, Florida’s state tree. While we didn’t see them, highly endangered Florida panthers, river otters, black bears, and deer use the same paths we did, according to Cindy. Not to worry, though. These critters are smaller than their counterparts elsewhere in the United States due to the tropical climate, she explained. Before spotting the orchids we had stopped to eat our sandwiches in a drier part of the strand when Cindy touched my sleeve. Across the clearing, a large white tail deer had come out of the forest and was watching us. We also spotted a raccoon, and I noted its elongated toes. A tropical adaptation, Cindy said. In another part of the slough, we gingerly stepped around a sleeping water moccasin coiled up on the path. I barely had time to admire a harmless baby black racer snake before it zipped into a bush. The Florida Everglades are unique, with the only ecosystem of its kind in the world. Cindy organized our day trip to follow the water that creates the Everglades as it flows—ever so slowly—from the interior of southwest Florida into the Gulf of Mexico. We began at 7:30 a.m. on the dry pine uplands east of Naples, then took an airboat ride on Lake Trafford (the headwaters of the Everglades on the west coast of Florida) into the wildlife-rich Corkscrew Swamp. Skimming across the water through tunnels of swamp hibiscus covered with huge pink flowers and acres of spindly, green vegetation nicknamed “gater flags,” we saw Osprey, herons, and turtles. Alligators were everywhere. They ducked under the airboat or turned tail and disappeared into the floating flora when we got close. Seeing these ancient reptiles happy in their habitat, they weren’t scary at all. One gater had a water lily-like “lake lettuce” plant caught on its head like a dainty Easter bonnet. We watched green heron fledglings sitting on the edge of their nest and fuzzy purple gallinule chicks following their parents across the floating plants. 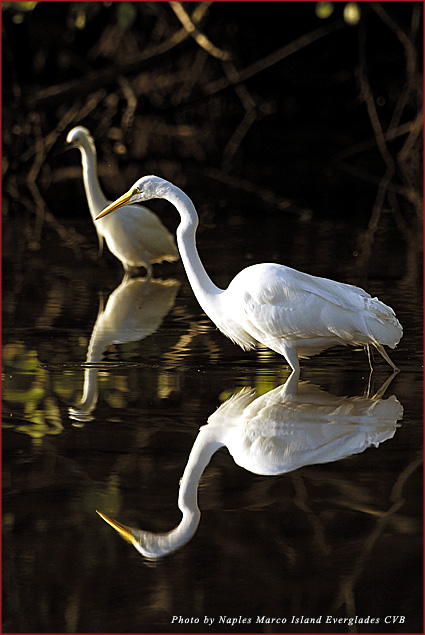 Our adventure ended at East River, a secluded boat jump-off spot along the Tamiami Trail (Highway 41), where mangrove islets begin their march into the gulf. As the sun set, we watched an endless stream of egrets, heron, and ibis flying in from parts unknown, landing one-by-one in the thick mangroves to roost. By nightfall, the green mangroves had turned white, colored by thousands of drowsy birds. I was ready for sleep, too. This had been 12 hours of non-stop amazement. I was tired but thrilled to have fulfilled the dream of a lifetime: to experience the Florida Everglades from the inside out.

Numerous tour operators offer Everglades excursion of all types. For a personalized adventure like this one, contact Everglades Day Safari Ecotour at 800-472-3069 and Western Everglades Tour with Roger Dykstra.